To What Do You Owe Your Happiness Today?

I did start the political shitpost thread lol.

I think that its not even about truth anymore its about agendas and endgame.

Heres what made me happy today…

What made me happy is a stranger asking me why i look so sad. Made me happy cause theres some people that give a shit about people enough to be kind.

yea, for sure, the same 1% rich people who actually control shit don’t change regardless of who is in the white house or controls congress

I’ve been trying to be extra nice to random people even if I’m having a shitty day. Unsurprisingly, it makes me feel better and like there is hope.

I would write more but i fear i would be stepping into the territory of those people that would try to change your mind about stuff you already know and thought about.

Lol people agreeing on the internet thats a first.

That made me happy.

Yea, I guess I’m breaking a rule I had previously agreed upon myself there lol. And I am now ban-able!

We would just be two working class people fighting for table scraps.

Im not all proletariat bourgesie because thats just like

And not lining up for other peoples agenda to be used as a pawn in their endgame doesnt make me or you a bad person nor a bad citizen.

Some of the dem politicians would betray their own ideology on a technicality, and also wouldnt be able to survive nor let themselves be caught in a bad neighborhood, some even talk a big game but when push comes to shove they would just talk and not walk the walk.

The rep politicians dont do anything to fix the haves and have not problem. Also with this bullshit about critical race theory and this trump obsession…they are just bullies…its almost borderline facism.

If the rep politicians had real balls and were genuine about america theyd ditch trump and pick condoleeza rice run for office…or colin powell when he was still alive, or liz cheney, or nikki haley, or an openly gay republican, or a minority…and make a super serious effort…even if it means losing a few elections…but no that wont happen. But most people dont want to be a republican because they dont support civil rights and because of fox news hate speech.

Also america is literally a bunch of immigrants that learned to live together because they believe in the same idea. Is there some bad history yes. But Gotta accept both the good and bad history.

And the idea is old…and times are modern…we sorta need to put our heads together to redefine this old idea in a modern context. We dont have to completely ditch the old idea…just update it from windows 98 to windows 15.

What made me happy im bald…and lebron james is balding…scarjo had some diarrhea…i had some diarrhea…rosie odonell got some nookie…larry david is doing another season of curb your enthusiasm, everybody is human go figure.

Well ask and you shall receive. This must be relatively new because i’ve googled this a million times and tried once more and voila, heh, now i have to learn it to earn it. If anyone is curious, here link

I wrote a Christmas song. Might even release it 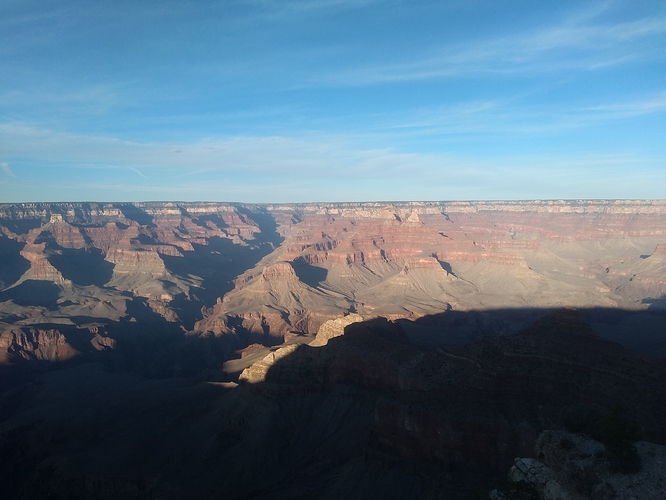 I used to do tours here, and its where i started making tunes when the volcas first apeared. Theyll always hold a special place in my ear heart. And regular heart i guess.

^Where’s that at? Whenever I see that kind of Vista it makes me think of Utah/Moab.

Its the Grand canyon, so youre right, all connected i think

Utah is a dang beauty as well. Drove my friend up there to visit her mom when she was at the family research center.
I remember being in the bathroom there and this dude in a suit sat in the stall next to me and just had the longest and loudest shit i ever heard! I remained as silent as i could. I hope homeboy is alright. Anyways clean city, they treat their homeless with dignity, SF could learn a thing or 2.

That we no longer share holidays with my toxic ass extended family. Just mom and pop and my better half. Dinner with them + my bro and his fam tomorrow.

Great indoor cardio for when its -30degrees celsius and 3ft of snow outside.

I dont care if i look like a clown

Started on what I’ll laughingly call the ‘art’ for my silly Christmas song. Main takeaway from it is that I cannot art.

But you work with what you’ve got

It is done. Lol

This criminally overlooked album by Akufen as Horror Inc. ; https://www.youtube.com/watch?v=wQvblLBauu8&list=PLaPk5HmSdGn_JDaTOIa5nmIC_OKX_Dv0c&ab_channel=SubstantiaNigra

I’m about midway into a 2 week vacation… never did that before… it’s good.

Spicy Salsa on bread for breakfast.

Also…salt and warm water to keep me regular.

(apart from that, i held a video workshop for beginners, that was fun)

My ladyfriend who I’ve mentioned many times in the pandemic thread who comes down to visit every two weeks finally admitted she has feelings for me and spent the night at my place twice last weekend (nice 40th birthday weekend lol).

Not sure if anybody remembers, but I’ve had the hots for her for over a year now. When she moved away I made her a collage, and it turns out she wrote me a frickin love poem but never gave it to me.

She’s coming back for Christmas, and once her school stuff in Chicago is finished this month, she’s going to be moving back here.