The only good Planet of the Apes movie is the very original one with Gun Advocate Heston. Some of the original sequels have some merit but aren’t great. Nothing but love for Roddie McDowell. The only reason I am grateful for Ape films is because they gave Alan Ladd Jr. the will to take on some upstart Lucas when he was touting his Star Wars thing because they’d unexpectedly made money from them, after everyone else had turned Lucas down.

Tim Burton’s effort was a highly polished turd and the recent(ish) trilogy has great CGI/motion capture but is meh at best.

The Hills Have Eyes - The 1977 original. A family unfortunate enough to break down in the desert is attacked by a group of mutants savages silly desert hillbillies. The remake is almost identical to this original, but there a few sequences in the remake that make it a superior movie. That and the monster effects/makeup are just silly in the original. Which is more creepy? This 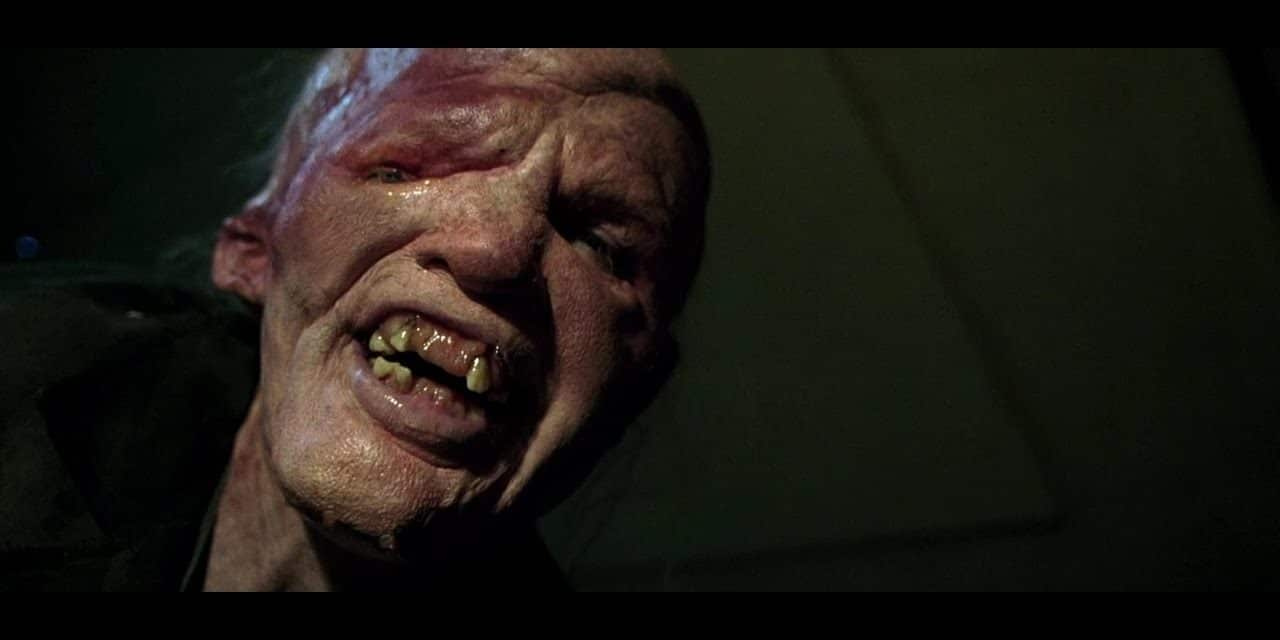 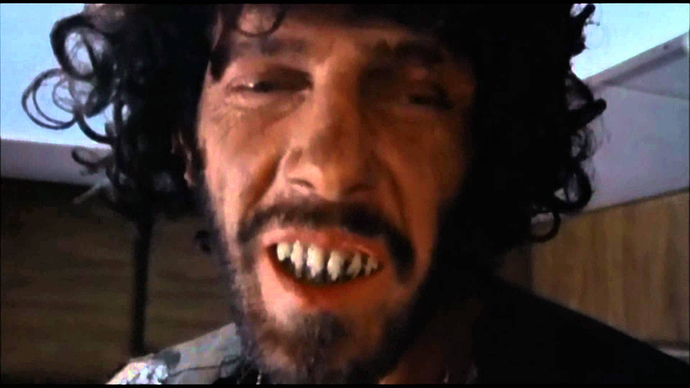 Yes, I realize the original didn’t have the same budget as the remake, but there a lot of low-budget horror movies from the 70’s which had great monster makeup/FX. Texas Chainsaw comes to mind immediately. Anyway, I don’t regret watching the original but I’ll stick with the remake. 6/10

Q The Winged Serpent - 1982 movie about a flying monster attacking NYC. Another low-budget one. This one has decent monster effects–if you like stop motion–but the biggest problem is that the monster isn’t in enough scenes. It almost is, if it had had even 3-5 more mins of screen time I’d be more positive about it. Also the plot sags a bit in the middle. It’s not godawful but it’s not very good either. 5/10

Wolfcop - 2014 movie about an alcoholic cop who’s turned into a werewolf. Cheesy fun B-movie. Made in Canada. Good stuff. 7/10

Brain Damage - 1988 Horror or maybe Horror-comedy about a man who is infected with a parasite that rewards him with pleasurable hallucinations in return for his homicidal requests. I think it’s a great concept for a film. But something about it felt missing. It’s hard to describe. Still good though. 7/10

Street Trash - 1987 Horror B-movie about a liquor store owner who unwittingly sells toxic booze to people, mostly homeless ones. The booze causes people to melt in a colorfully grotesque manner. There’s other unpleasant stuff in this movie too. The plot is thin however. This movie’s treatment of homeless people is pretty unsympathetic but it doesn’t seem like it’s taking itself too seriously so it’s forgivable. If you came to watch people melt in a movie, you came to the right place! 6/10

I also watched The Excorcist Again…do I really need to say it’s a 10/10?

I still have my original copy of this with the VIPER liquor stickers that it came with.

That movie is filthy as hell, it literally makes you feel like you just survived a homeless experience in a scrapyard. For that, I rate it pretty high - and also people melting and getting flushed down toilets was pretty creatively hilarious for that era. Good b-flick, for sure.

@moodorf given your movie selection I HIGHLY recommend that you watch “Father’s Day” if you haven’t already seen it… (not the old comedy film, the grindhouse one)

Looks like the Snyder cut of Justice League is happening. It will be mediocre.

The best DC-based movies had nothing to do with him. Man of Steel is probably his best and thats pretty good but not brilliant.

Despite what I’ve written above I’m still interested to see it. It would be nice to be dead wrong.

Beneath the Planet of the Apes, the second one, is also excellent in my opinion. The mutants with mental powers wearing masks are creepy, General Ursus played by James Gregory is fantastic. “The only good human, is a DEAD human!” Zaius, Cornelius, and Zira all return as does Chuck and Nova. James Franciscus was cool as the new guy trying to find out what’s going on. And the ending is classic 70s pessimism.

Well I ran out of luck and watched The Meg.

Some laughs for sure but jeebs, a bad film. Some very fun touches though like instead of ‘The End’, it finishes on ‘Fin’. It just meh’d the shit out of me but in fairness I’m not even a fan of the genre so part of it is my lack of enthusiasm for that kind of thing.

Awesome. It should be terrible but its imbued with so much under the skin its still a joy every time I see this. The sequels and remake not so much.

@Roo_Stercogburn Your film reviews are the best :DDDDDDDDD

I recently watched the movie The Lodge . 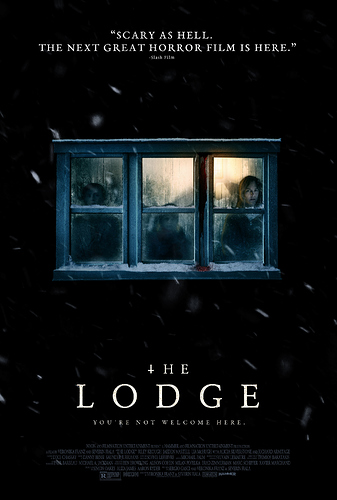 Got through “Once Upon a Time in Hollywood” on Friday with my parents. I’d say that’s a 6/10 (where 5 is passing). I don’t see myself watching it again, because the absurd (and I use that in academic terms, not derisive) twist ending isn’t going to work again, and barely worked the first time.

I loved the characters. I love how well built up most of them were. I loved the acting that went into them. Unfortunately, it was like watching two and a half separate movies that only had tangential connections to one another. Brad Pitt and Leonardo DiCaprio’s characters do have some sort of buddy story going on, though we spend a surprisingly large portion of time with them not sharing the screen for that being the case. And then off on her own we have Margot Robbie doing her own thing and really not interacting with either of our other two main characters until the last shot of the movie. And the movie takes a lot of time explaining her situation for someone that frankly didn’t figure into how the movie actually played out. I suppose the twist ending wouldn’t have worked without it, but it felt like there had to be some fat somewhere in here to trim down. I was ready for the movie to be over about halfway through, but it just kept going and going and going. Again, it was enjoyable once.

Kinda hard watching the trailer for Bill & Ted Face The Music and there’s no Rufus.

Yeah I’m glad Carlin isn’t around to be a part of this.

Just as a side note, has there been any movie from this “late sequel” trend that’s been even decent?

I did like the A-Team movie because it was proper stupid though I didn’t like the way they changed B.A. Barracus. Other than that, can’t think of any and even A-Team was a cheesy shitfest but it just tickled me.

Next year, Casablanca 2: The Casablancaning. I can’t wait.

ahhh you got me fucker.

Just as a side note, has there been any movie from this “late sequel” trend that’s been even decent?

Jay and Silent Bob Reboot was… 75% painful…
…but it was at least nice to see a late sequel talk so much shit on its own existence.

Kevin Smith’s guilt trip is all that movie was.

Dogma was good though…

Jolly good crapper. The story itself is great, just lots of ham-fisted delivery. Some of the plot holes are quite funny. While they’ve clearly been setting up the origin story I’d be very surprised if there is a sequel.

Birds of Prey (+shitty not funny subtitle that tries too hard):

1 hr 49 of Margot Robbie working hard as fuck because the writers didn’t.

This film is a journey and its a great film. Every encounter has a consequence. Not a lot I can say without spoilers so stopping there.

Such a weird fuckin’ time to be a movie buff. I’m almost out of backlog stuff that seems highly curious. we’re in a massive drought production wise this year.

Someone recommend something to me! fuuuuckkk