The Blofeld is still rather relevant

Gassing for an Access virus classic desktop a buddy is selling.

I have the same synth engine in my Virus Rack, but its old, the encoders are shit (nearly unusable, apparently a known issue that most have not been able to address). Currently, I control it via an editor and rarely touch the hardware and while it does sound great i find myself using Serum more and its a bit of a shame.

Its got loads of outs and polyphony, and its form factor makes it a great candidate to use alongside my MPC2500 for this table top techno rig i’ve been dreaming up.

i have the virus c desktop, a classic.

Virus is the only digi that has continued to interest me. Every now and again I look to see if they’re making a new one.

I was interested in Kyra at one point because it was such a Virus clone, but with modern power and modern VST standards. Then Waldorf took forever to bring it out and pushed the price up and I haven’t heard anything about a VST for control direct from a DAW.

I know they’re very different. trying to figure out which one would be more fun to own.

Christoph Kemper who made the Access virus has since started a very successful business selling Kemper Guitar Amps, as the guitar market is much larger with more money to be made i seriously doubt he’ll ever make another synth.

When valkyrie was announced is seemed like exciting times (next generation indeed) However Ive been following the Kyra thread and it seems rather disappointing, i was expecting a lot from that synth. It seems to have a bad user interface and all goes down hill from there.

I seen one at Synthfest i thought it looked a lot better in the flesh than what you see on the screen, but i didn’t have a try.

Iirc he also has to completely remake anything because the DSP chip used in the Virus went End of Life with no replacement, or something like that. Just not a lot of incentive for him to do another really. I don’t know what DSP chip the Profiler amps use, though. 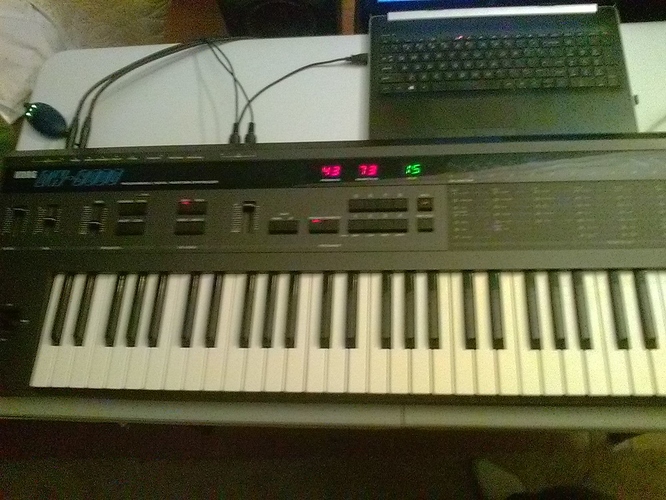 So I bought one of these yesterday off a guy on Craigslist. Sounds awesome but some of the buttons are a little worn out, thankfully I just so happened to have CRTRL on my comp so I’m using that to control parameters via midi.

Used to have one of these. loved it!

CRTLR seems like your best bet for it, as the ole 1 parameter at a time thing was a bit obnoxious.

I’m going to need to unload something now, as my 1 in 1 out policy is still very much intact.

My Akai Force came in on Sunday, and it’s been eventful ever since. I almost sent it back, but I think I figured out my issue and I’m going to be diving deeper into making this thing do cool stuff now.

So first, the day I got it, as @Auto-meh-geddon said, it was rough sailing the first 3 or so hours. Since then, I’ve figured my way around it pretty well (though sequencing anything that isn’t drums is still a mystery to me). But, between playing and correcting the events in post, I can just about make it do what I want, pretty quickly.

Put it on my stand for the night and figured the next morning, before work I would try making a midi sequence on it and sending that to one of my synths. I’ve never done that before, and I thought it would just be the kewlest to know that I could. I leaned over my rack to get at the midi ports on the back of the unit when crunch - the bracket that I superglued together to get me through the week 7 months ago while I ordered a spare just broke. I leaned too hard on it. I had to pull everything off, find the spare I had ordered, swap it out, and put everything back. Probably a good thing I did it, but there went that morning.

So that night, I figured I’d update the firmware, pop in a spare SSD, and load my samples onto the thing. I still had launch firmware on it for some reason, so I updated that first. Then my screen blacked out. I googled it and it has something to do with how external drives are formatted, so I pulled mine out and reformatted it. That seemed to work, so I got my samples on it and made a beat with them. All was well, I was tired, and I went to bed. Then next morning the screen was blank again, so I pulled out the SSD and it worked fine again. Not cool, I have the Samples from Mars collection, and I want to use it. So I contacted customer support and they told me to try it in an external USB enclosure or reformat again. (it was at this time that I was about halfway to sending the thing back). So last night, before formatting, I plugged in my SSD usb and it worked. So I grabbed my headphones to see if it could get the samples from my external drive and yeah, sounds good. So I restarted it to double check and - no screen. So then I unplugged my headphones and tried again - and it worked. WTF? Seems if you have an external drive plugged in to your Force and you try to turn it on with headphones plugged in, the screen won’t turn on.

Weird issue, but I guess I can understand it if some core features of this thing are still in development. I’ll be trying to reach out and let them know, and I wanted to let you know as I know some of you have or have been thinking about getting one of these things. I hope I’m past the teething issues for my implementation at this point (though I haven’t even started to mess with the MIDI I was trying to do back on Monday…) and I can start to figure out things like how to sequence chords fast (or play them better) and how to make automation useful without an arranger mode.

That’s a very odd issue, I haven’t had any problems with the internal har drive or even with the external one I use early on, I’d keep an eye on it and send it back if needed, stuff like that shouldn’t happen at all. The core features are there (apart from song mode), they’re mostly fixing bugs and adding stuff.

Try the Akai Forum, there’s a section dedicated to the force.

A forum for the Akai community to discuss all things Akai.

If you see some posts under my name, it wasn’t me obviously.

My Live goes to a new home tomorrow, the Force loses a bit in sampling (not as super fast as the Live), but wins a lot in workflow so for that reason it will stay.
Plus the mixer interface is much better.

Quick tip that drove me nuts at the beginning: you access the master mixer by pressing mixer then the Master button on the bottom right.
Slap an Air Channel Strip and Air maximiser on that for insta-ghetto mastering.

I think if you also swipe right on the screen you get to your sends and master. I might be wrong, haven’t done a full mix yet. I have gotten pretty good results so far just with the pad mixer and some light compression on the drum bus.

As far as the headphone thing goes, I think I don’t really know how my audio is routed, because I’m pretty sure my headphones are taking the cue mix by default, which I think is outputs 3-4 instead of 1-2, and I haven’t figured out how to change that yet. If I turn down my cue mix though, my headphones get no signal, so I know for sure that I’m doing everything off of cue not master, and maybe trying to push a cue mix on boot while looking for external storage is too much, idk. I’ll double check amazon’s return policy, but I think it’s like 4-6 weeks, so I should have time to push this unit and make sure it’s not defective.

Bought a new amp for the PA. Sub woofer incoming in a month or two. We gonna bang this year : )

Odd indeed.
Mine work normally, Cue knob turned all the way to 1/2 will give you the master only, then Headphone volume to your liking.

It just dawned on me that Korg didn’t announce a new Volca at NAMM. They released a lot of new stuff, but that seems a little surprising. Then again, I guess there isn’t a ton of ground left to cover for the little boxes other than a real sampler, and maybe a Mini Me Wavestate.

Speaking of Korg and Volcas, I wonder how well a full size Drum in the $300 range would sell?

warming up the muscle car for a late night jaunt 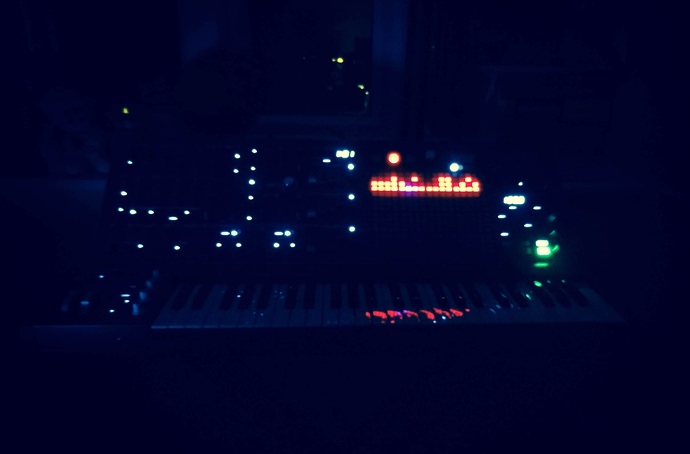 I just got around to updating the firmware last night. Played around with some of the poly patches and got inspired for the first time, I think , this year. Played around with the idea in my DAW and some on the Force this morning to see where it takes me working on the same idea two different places.