What is that? Some coding thing?

That looks like shell script that checks for what type of MPC it is and then prints out properties about it. The guy is basically saying taht MPC One and MPC Live Mk II exists in firmware 2.7

Ive got quite a few digital synths, Virus, MS2000B, Digitone etc, what makes them different to a VST plugin, well you can simply turn off the computer and have some hands on fun.

As for Hector, i used to love those elektron videos they were micro-movies.

Tonight ill turn off the computer and sit in the dark with just a Matrixbrute and Oto Bam, i’ll get totally engrossed to a level I’ve never achieved looking at a computer screen.

Moods. There was a time when I would just sit there with a MicroBrute and my iPhone using AU:Dub and AU:Space for effects and get lost for hours

Conan, what is best in life?

To own synthesizers,
To get lost in them for hours,
And to hear it all drenched in reverb and delay.

To feast on the tears of hardware freaks when VSTs sound just as good.

To feast on the tears of hardware freaks when VSTs sound just as good.

Well, I got paid today, so I decided to order the Force on my lunch break. Ordered with Amazoom because I have free prime til the end of this weekend, so I’ll have it by Sunday, though secretly I hope it makes it to me tomorrow. I live within 10 miles of 2 or 3 distro centers, so sometimes I get fast shipping like that. Don’t worry, I’ll be back to Sweatwater, ejay, and refurb for the foreseeable future of my hardware purchases.

Nice! Never seen a synth I wanted on Amazon in the UK. Maybe I should check at random more regularly.

What are you at now? Maybe you mentioned recently, but what have you got yourself into so far?

I’ll be waiting a bit but having Sweetwater has let me get a few things. So I feel you there. Live 10 suite and the digitakt, so far. Well not really but yea…

I’m still in the learning stage and even though I came from another MPC and from Live, the first few hours were difficult, keep the manual at hand.

The only hardware reverb i owned was an Eventide Space so i was rather sceptical if they’d be too much cross over purchasing a BAM, however i must say i really enjoy using the BAM. Space is more like a set and forget otherworld big reverb where id only ever go as far as tweaking the wet/dry, where as BAM just begs to be tweaked, it not stop when your using it, there is no screen with text its just LEDs lighting up which seem a bad idea on paper but then it makes you go by your ears rather than what its saying on the screen which blends in beautifully with its work flow. Just feeding it something rhythmic then manually changing between the algorithms gives you that micro-editing vibe with slight changes in tone and the same bringing in the gain then pulling off sounds great “dirty, light, dirty, light”, its a lovely vintage dirty thingy when it wants to be, i could describe BAM as the Aphex twin of reverbs.
Lastnight i was controlling all its parameters via Midi CC from Ableton, and it all works like a charm.

On paper it seems expensive for what it is, but i can’t remember the last time i had so much fun with a £450 piece of equipment.

To be honest I’ve only used BAM with the Matrixbrute up to now, they seem to have paired up quite nicely, must be the french connection 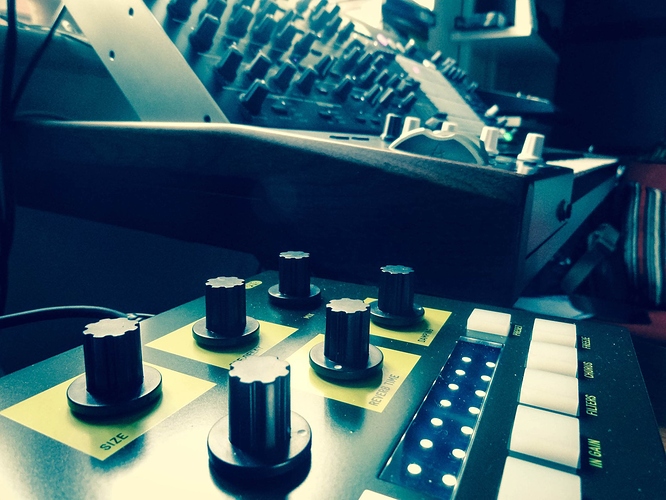 I was really considering buying Modal’s Argon8 when Wavestate happened.

Last time I owned a hardware synth was many moons ago… I’ve been using VST + controller for over a decade now, mostly for practical reasons.

Both look fun (and affordable!). While Argon8 seem to have more “personality” (by that I mean it’s got a somewhat unique sound), it looks more limited than the Wavestate (I really do like the sequencer “stacking” thingy).

Which one would you get and why…?

If I had to pick one I would get the Argon8 because they’re going to make a version of it with a 5 octave kb. A three octave polysynth seems kind of silly to me.

Which one would you get and why…?

The Wavestate. Mainly I like the sound more and the fact it’s multi-timbrel.

Yup, seen it on the website, it looks neat. I do agree with you. Not super-stoked that the Wavestate is only 3 octaves either… On the bright side it would be taking less desk space and I guess I could always link it to a full-size controller if I really needed to.

Right. It does feel way more versatile than Argon8, if only because of Korg’s “lane” system and vector synthesis.

Im not even sure why your comparing a Argon8 to a Wavestate.

Argon8 v Hydrasynth would be a better comparison as they both use wavetable synthesis.

Because they are at the same price point I guess. The Hydrasynth is an extra 500 greens.