I think very well, there’s not many drum synths out there that are able to cover as much territory as the Volca. An Electribe with the Volca Drum engine would be great

Speaking of Korg and Volcas, I wonder how well a full size Drum in the $300 range would sell?

I’m still quite a bit partial to the Tascam 688 though.

Apparently having an amp that more accurately matches your PA speakers power requirements makes a big difference. I wouldn’t even turn this amp half way up if I were having a house party (this is also lamer 37 y/o me talking, instead of E’d out raver me from 15 years ago).

Posted a pic of the porta setup a while back but have a couple small additions and some new plans. So I added the NTS-1 and a second briefcase. The new idea is to house my laptop, power strip and interface in the new briefcase. I will cut a whole in the front so my Interface knobs and headphone connections are accessible and mount the interface with velcro tape. I will drill out hole in the sides and run cable extenders which will mount to those holes. My laptop will partially sit on top and the power strip will have the male three prong running out another hole. My laptop will mount partially on top. The plan in to eventually get it to connecting a couple of cables and popping open the two briefcases and being ready to get busy. No fussing about with setting everything up every time. Still have the Td-3 on order and have plans to buy one more small synth like a preenfm2. We will see if it works out. 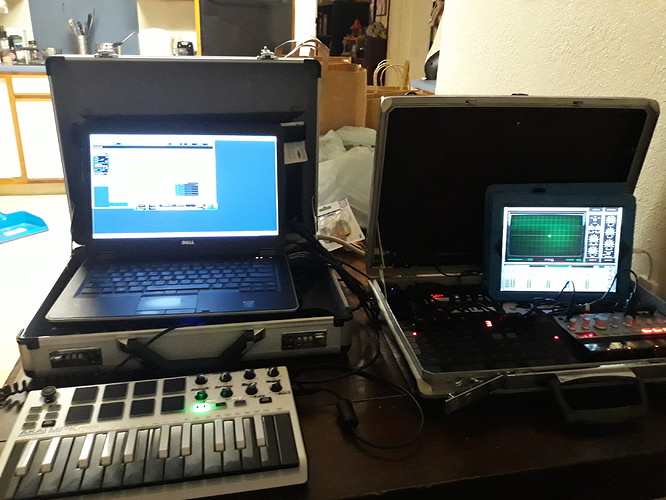 I bought a sub woofer.

FACT: when you buy a subwoofer, your neighbors will shower you with appreciation. They Love subwoofers.

FACT: when you buy a subwoofer, your neighbors will shower you with appreciation. They Love subwoofers.

Everyone will love my Sunday Funday BBQs. If we throw in some Lynard Skynard now and then I think our neighbors will approve…lmao

@chasedobson so you are saying come up with a better story for my partner than ops?

I’m in a second floor apartment. My 10" Polk sub is in storage. I really want it in there with me but the temptation to play old Techmaster PEB or Bass 305 stuff would be too great.

I had a sub in an apartment once. But the design of the place meant the walls of my living room were exterior, I had a demo apartment on the side where my bedroom was, and parking was beneath me. No one above. I could be as loud as I wanted and it was glorious >_>

from what i gather (feel free to kick the $hit out of me if you want) that sub-woofers are great for listening to music but not to good for producing music, i was just listening to a producer the other day saying he got rid of his sub-woofer because there was that much bass it encouraged him to turn the bass down but when he herd his music outside the studio on other systems the bass was too quiet.

then theres that space what I’ve talked about before where the sub and speaker frequencies meet it could possibly be hyped where they meet/merge, so again you’ll end up EQing this area when it doesn’t really require it.

Opps. This is for my PA that I use for a few dance music parties every year or lend out to friends for parties.

But solid advice! I cant use a sub in my studio w/o treatment. Five inch monitors are plenty + headphones.

Or you could get really fancy and get Genelec point ones with matching bass unit. Or go for broke and do Kii Threes with their bass units.

Can you tell I was reading speaker reviews yesterday?

the idea keeps crossing my mind of not buying anymore gear and just save up for a Buchla music easel, after I’ve payed for the osmose of course

Lithium battery needs replacing… and 3 of the pots are in BAD shape.

It’ll set me back 30 dollars in parts and an hour of my time, so its not THAT big of a deal but… I payed too much for it, in the condition its in.

That’s kinda a bummer man. +1 for being able to do your own work. Hope you get it up and running soon.

it’s about balance and tuning but it’s really easy to fix it. If you check your mixes and you have too little bass, turn the volume down on the sub and keep going lower until your mixes sound right. I’ve had to do it in the past, but I used an RTA. Now I can do it pretty well by ear.

pots are in BAD shape.

Pots being the knobs?

have ya’ll fuckin been keepin up with gamechanger audio? motor synth is releasing this year (hard synth with 8 actual servos serving as it’s oscs) and they’ve just unveiled their light reverb, which is a spring verb but also an optical verb. not even sure hw it works but it sounds dope af and looks beautiful to boot. also the rack mount plasma unit adds a shit ton of features, i think over the next few years you may end up seeing those become standard in any top pro level studio with a strong budget cuz it is such a unique flavor of distortion.