I have a K5000S in the closet (no space atm) and love additive synthesis. A guy made a patch for Bitwig’s The Grid that sounds really lovely, too.

This was posted a week ago, showcasing the Odessa in a small modular jam with a Jomox MBase 11:

I know this is hardware, but if you’re into additive synthesis you should check out IL harmor. One of the best things about FL studio IMO, but also available as a win VST. I like it because you CAN treat it a lot like subtractive synthesis, but everything under the hood is additive and you can do some very unique things to the partials. I’ve made some sounds I’m still proud of with it.

Thank you. I mainly use a MacBook Pro when I go to a DAW. I did snag an additive patch someone put together for Bitwig’s The Grid that sounds lovely and ethereal, with a very clever patching so it doesn’t obliterate the CPU with a ton of sine oscillators. The guy used a bunch of Chebyshev waveshapers instead, and just sent the one output of a sine oscillator to a bank of those with some attenuators, EGs, etc to create and then control each partial.

I do own NI’s Razor but it isn’t installed at the moment.

Does anyone here have one of these things? I really love the idea to use this with my baby boy and my wife even thinks it’s an awesome idea, but it’s kinda expensive for the functionality when I think of it as a synth, especially for someone coming exclusively form softsynth world… So any experiences with it? Or fun alternatives?
Koldunya 2019-12-16 14:16:22 UTC #1297

Other than playing a note chromatically, I’d have a lot of partials to work with. I could resample into a Keygroup Program to play whatever I come up with chromatically, though obviously it wouldn’t be quite the same.

I imagine the polyphony of typical hardware samplers makes this very prohibitive/costly to do, but the modern MPCs can handle 64 notes at once (which is unfortunate since it can have 128 samples loaded to the pad banks in a Drum Program). I think it’s 64, but I can’t find the number anywhere other than some getsatisfaction post that was pre-released, even in the manual. Maybe it’s only limited by CPU and that’s why it isn’t really mentioned.

I think I’ll play with this tonight when I get home and see what I can come up with >_> if anything it’ll be fun to try and see how far I can get, at least.

I can’t link to it because I’m at work, but I think BoBeats took a look at that and he actually has kids, so he might have some insight. He also plays with a lot of hardware, so he might have other recommendations too, IDK.

My guess is that modulation is going to be the problem. A few dozen sinewave oscs isn’t that hard to do. I mean, I’d rather not, but OK I can do that if I have to. What gets challenging is trying to do a few dozen envelopes and keep them in time relative to each other. I’d probably give up somewhere in that process. Best of luck to you, I’m curious how it turns out.

I’ve tried to do almost the opposite in the past, using Harmor, by having really crazy modulation and then using the custom “filter” shape to draw in the harmonics of a square wave. The thinking was all that crazy modulation would be filtered out and I’d be left with a square with constantly modulating levels of the harmonics, but always harmonic in nature no matter what I did before the filter. Unfortunately, something was off and it was always not really harmonically ordered after the first 3-5 tones, and I couldn’t keep it in tune, and I was using all my modulation up before the filter so it was a very static sound when I did get something resembling what I expected. So I don’t try and get too fancy with my additive synthesis anymore.

you know, I bet Bitwig could make that work. I will give it a try over the break.

I’m thinking in the end it will take way too long to be worth it, but I might get away with some Q Link tomfoolery on control, not 100% sure on that one. In the end it’d probably just be better to use a software additive and autosample the patches I make. This is all just a thought process in my head atm, because my MPC isn’t in front of me and I can’t visualize what I’m thinking of right this minute.

That said, I also just saw that Monome released a Pi hat for doing a DIY Norns on a Pi 3b+

I could also play around with one of my Axoloti boards, but those things run out of steam pretty fast. I made a drum synth once and just the kick and snare took a good amount of CPU.

edit Forgot I have a webinar tonight >_> might have to wait until tomorrow.

The best thing about the Mpc Live?
I just packed a backpack with the Live and headphones and I’m ready to survive 9 days at the inlaws.

Still dicking with tape when I have time. Undervolted/slowed walkman with a loose belt for off-the-chart w&f makes for great sound source action. 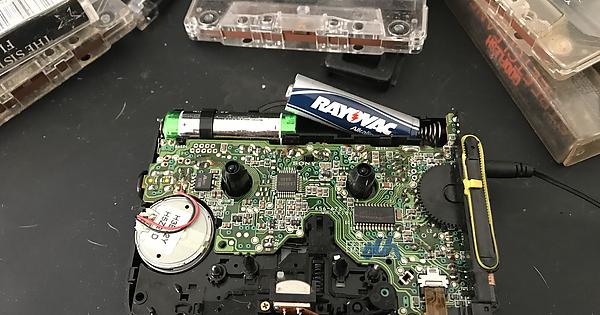 Here’s Bob with some Valhalla on top:

Think I’m going to dig out my old Marantz 201 and see if I can get it working. That half speed playback is dirty magical.

man, I picked up a walkman this summer with the same thing in mind…got any tips? I also grabbed a cd player with the same idea. will see if I can get some glitch out of it.

Most of my work came from fixing shit that was wrong from sitting in a box for 20 years (sometimes with batteries still in them - yuck). Out of the three I had, only one would still get power. If it tries to spin, you’re mostly home free.

After that, it’s just a matter of getting it out of the case. There’s usually a plastic Philips head pot on the backside of the PCB (often right by the battery lead) where you can adjust the speed. All the way down was where I went, but you could conceivably wire an external control to it so you could ‘play’ the speed. It doesn’t have a massive range, but enough for interesting effects.

For undervolting, you can either use old batteries or put a pot in-line with the power. I found 500-1k was the most effective for mine, but it probably depends on model, etc. It’s a pretty tight balancing act; at 5V, it doesn’t take much to stop the motor completely. You can also do stuff like just put your finger on the drive spindle to slow it down momentarily.

As I mentioned, a lot of the crazy warble came from throwing a worn out belt on - I stole one from one of the non-functioning walkmans. Different belt tensions and shapes lead to different effects: warble, slippage, flutter, etc. Probably best to just buy a cheap set of belts off amazon or ebay and play around, depending on the effect you’re looking for. There’s also all the usual tape tricks - short loops, mechanical degradation, splicing, etc, that don’t really need tooling to do.

All that’s a big reason I’m looking to rehab the Marantz. It’s got a half-speed and a pitch control built in, and changing belts and disassembling to adjust the playback on the walkman is finicky. I’ll probably leave it as-is or try adding some external controls, as I really don’t fancy drilling holes in my nicer players.

I’m pretty sure that I mentioned in this thread (or maybe it was in another) that I love my wonky/broken/in need of TLC Tascam 414mkII. I doubt it was ever serviced by the guy I bought it from ($20 score before the $150-$200 (and $450 even) madness took over. It plays back recorded cassettes at double speed so I have to pitch it down an octave in a sampler (which I liked the idea of in the first place), but it’s like lofi magic dust. It has a pitch control good for a +/- 10% speed change in either direction from its base 9.5cm/s

I also do RCA line out into the RCA phono in on my MPC Live. I have female RCA to male 1/4"/6.3mm adapters to use the normal line ins, but the RIAA EQ on the phonos adds a filtering/EQing effect to it, so I’m just really careful about levels (nor not).

I feel for my Wife, she bought me a Korg Volca Drum as a surprise for christmas off Amazon,

However i answered the Door and Amazon just sent it in its original box.

ill be banging out some beatz crimbo morning.

I’m not surprised i thought it was only a matter of time after the Karp Odyssey.

Always thought if Korg do a clone id buy one, but now i’m wondering with all the gear i have if id get any use out of a 2600 or am I’m just romancing.

You’re the one with the biggest gear lust at the moment and trying to bring everyone down with you.
I respect that.
Might have to give you a custom tag.

Speaking of gear lust, I’ll start working for a huge game company soon so my own games will take a step back.
Which means I’ll be making more music and 2020 is the year I’ll get back to try and play live.
Which totally justifies the fact that I might get an Akai Force or Roland MC-707.