yeah, as much as I like modules, with the MicroFreak that keyboard has uses from my understanding.

I consider myself pretty savvy but for the life of me i cannot sort out the Access Virus multimode.

I spent this AM creating HW versions of my Serum patches for this liveset i am building and that part went ok, passable, but not 100%. I’ve put the virus in multimode - ch2 is playing back my arp just fine, but on any other channels it just outputs horrible noise.

im going to say that this thing is likely buggy, cause… WTF??? This isnt rocket surgery I’m attempting…

edit: anyone got an access virus B/Classic and have a few minutes to discuss?

Can you post a video of your working with the Virus? I’ve always wanted one and simple routine stuff with them is fascinating.

not if i smash it first.

i need to get this very ROUTINE thing going before I post up any video. something just isn’t right here.

OK sorted out the issue.

When i got this unit used it needed a new lithium battery. Apparently when it died (the battery) it fuqed the multimode settings. each channel has a key range so one can do performance stuff, bass on left hand pad on right… you get it.

when the battery died (im guessing) the key ranges got flip flopped so the low range was C8 and the high range was C-2 so no midi was triggering the instruments in range. this is either a battery thing or the prior owner didnt know what the fuq they were doing and was just mashing buttons hoping to get it to work.

this thing is still a bit screwwy but i can get what i want out of it currently.

I hear you. I owned a Korg MS2000BR that stopped working, so I sold it for $100. Turned out it was a broken solder joint that it’s new owner simply re-soldered… dammit. Here’s the one I sold:

sweet, the USPS is delivering my crusty old mixer a day early. Godless Fedex basically never does that (tbh they are my least favorite shipping company), because they are not god-fearing and righteous like the godly USPS who regularly delivers early (I’m being facetious here… sorry in advance if I offend anyone). Fedex is late sometimes.

I can’t wait to tear into it tomorrow

Here we have a few couriers that are synonyms with shit services. I always end up paying a little extra for the ones I know won’t let me down or force me to chase my parcel somewhere in my neighbourhood

sweet, the USPS is delivering my crusty old mixer a day early. Godless Fedex basically never does that (tbh they are my least favorite shipping company), because they are not god-fearing and righteous like the godly USPS who regularly delivers early (I’m being facetious here… sorry in advance if I offend anyone). Fedex is late sometimes.

I can’t wait to tear into it tomorrow

I don’t mind FedEx. They are the most expensive but they’ve never lost anything of mine or had it sitting at a sorting center for months meanwhile everyone just shrugs their shoulders and acts dumb when I call around for help (looking at you US Postal Service). In the USPS defense though, we have a notoriously bad, regional sorting center somewhere just on the other side of our border with Pennsylvania. I think it has a 2 star rating on Google. Claims of workers just straight up stealing packages and such lol.

I could be wrong, but I think they are slow/late with home delivery because they prioritize businesses. When I worked at the motorcycle leather shop we had to fight with the local FedEx depot because they would try to deliver things 3-4 hours before we opened and then we’d have to cancel the delivery, wait a day and send someone down to the depot to pick it up. They were just trying to do their job and get us stuff fast but we were a small business and didn’t have a 3rd shift person for taking deliveries and stocking.

UPS is the only one I’ve not had any unusual experiences with.

Well, this old BX-60 works fine. It does have one oddity which is unfortunate, I don’t know if it’s a defect/malfunction or just a quirk of how it is. If I push the S2400 into it too much, it acts like an automagical sidechain on the other signals coming into it

Notes/sounds on the kick get silenced out, so like, a droning oscillator sounds like it’s playing quarter notes on the beat. It does do nice things to the drums, though, so I might just run 6 of the S2400s outputs into it and the stereo out to the H4 and call it done for now. I plan to get a little rack shelf to put assorted smol pieces of gear on, so the BX-60 will probably live on that with some guitar pedals, so eventually plumb it into the patch bay or something.

It does ensure the kick isn’t drowned out by that thicc MiniBrute 2S bass, though, which is nice to have.

As I play with this setup, some things just get wonky. Sometimes the 2S and S2400 are just not happy communicating with each other. I’ve had weird sequencer oddities with both machines and had to restart either one of them to clear it up. Not sure yet which machine to blame; I need to take one and then the other out of the picture and see if problems come back; I’m leaning to the S2400 as it’s a less mature product, and I’ve had both the Pulse 2 and Wasp freak out after getting MIDI notes from it (stuck on notes, I guess I figured out how to get the Pulse 2 to drone lol.) The Wasp doesn’t have a panic button and so I have to power the entire RackBrute off to sort it out.

I think I’ll give the Maschine+ a go at it and if it works, post issues on the Isla forum. I think most people there use the S2400 by itself, though. Maybe I’m asking too much of a modernized SP-1200 recreation

I think for $8 I made out like a bandit on this mixer, though. It’s definitely worth cleaning up, now. I noticed most of the “knobs” are trimpots like those used on densely packed eurorack modules and some smaller gear like the Volcas and MFB 522, but nothing is scratchy atm. I think this thing got used for a while and then sat for a very long time.

I wonder if there is some kind of internal limiter (ie; passive, you have no control over it) in the BX-60?

Kinda what I’m thinking. If I turn the drums down it stops happening, and I can see some little lights that remind me of the limiter light on an old bass amp with that built into it. And also, lol, I forgot to mention it came packed in some old dirty furniture foam

I mean, I’m all for recycling/reusing but that’s a new one…lol 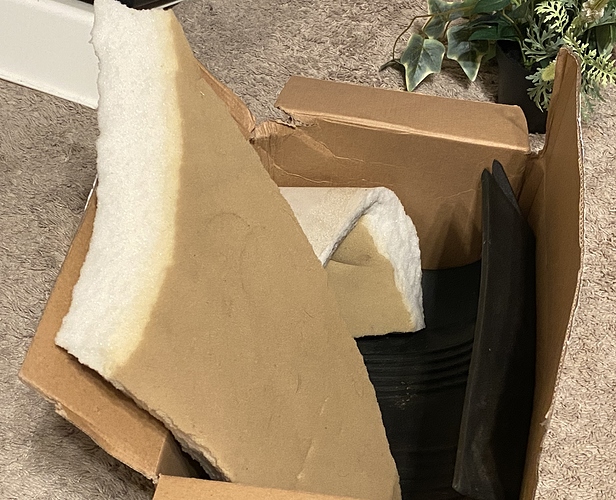 One of the lesser perks of California is that I live within half an hour of 3 airports and 2 ginormalous ports, so I get pretty much everything I order ahead of schedule. It basically comes off the boat/plane and they drop it on a truck and get it to me often that same day. I also live like 35 minutes from the City of Industry, which is a huge warehouse city that has a population of about 50 or something. It’s ALL warehouses. So a lot of the stuff I order is already just sitting there somewhere.

That is hilarious. I guess who cares as long as the the thing shows up and nothing is gross or smells lol

I can lay down drums with a quickness with the S2400, but the Maschine kills it in controlling everything else. I think I may just use the S2400 by itself which tends to be how most people use it anyway. Keep things simple with it, since that’s essentially what it’s meant for and how it seems to perform best.

That is hilarious. I guess who cares as long as the the thing shows up and nothing is gross or smells lol

This might interest some of you. A Maschine+ for $900

In other news, this BX-60 cleaned up very well. There is… something that slides around inside the case, and I don’t feel like opening it to find out what XD

Edit 2 Damn it, the laptop stands I like to use for gear are “currently unavailable” and Amazon suggests a product whose picture looks identical but is twice the cost

I put the stock knobs back on my Maschine+ and put the big one on the Proteus 2000. That looks fucking fantastic

Edit The Morpheus, on the other hand, has a 6mm volume pot, and the data encoder is 6.35mm/0.25" which is a lot harder to find these days. I have some knobs that fit, but their height just doesn’t look right, like on the Maschine…

Saw a monkey on a synthesizer