and NI has a new subscription service… Komplete Now, which they seem to be adding to with Melted Vibes to be added to it next

weren’t we briefly discussing that here after NI was acquired by iZotope?

edit 1 I forgot to mention, the screw holes on the Wasp do not line up properly

On the K-2, all 8 lined up with my eurorack rails. On the Wasp, when I screwed in the outer 4, the inner 4 don’t line up lol. Dat Behringer kwality…

it was an $8 Boss BX-60 which I read on a Reverb listing was claimed to have “good saturation” and “makes drums sound great.” Usually these are like $80 or something. 6 channels, basic controls, actually has an FX send/return but no EQ and I don’t care. I don’t even care if it actually works for the price I paid. It looked pretty dirty in the pics lol, but it does power on. I think this qualifies as my first piece of clapped the fuck out (potentially) shitty gear

it costs more to ship it XD but it looks reasonably small/compact. I imagine after cleaning the outside and testing it I will need to open it up and clean up the inside, hit the pots with deoxit or something like that. Will give me something to do. It’ll fit sideways where the Zoom H4 is right now, possibly with room for the Zoom on top.

Edit1 Another option I was looking at were some $50 Realistic 6 channel mixers with VU meters on them, but then I saw $8…

I’ve got the BX600, and yes you can drive the inputs quite nicely. Also having the FX send/return is really handy. They are both basically the same I think on the inside, but the 600’s knobes are all the same size and colour coded. Need to take mine apart and clean it. It’s been sitting in a bag for the past year. Pots were getting scratchy and I wasn’t getting good stereo from the outputs, and I bought a Behringer QX 1204usb, so I can have the com’s audio coming through the mixer to drive my DT880 pro’s.

For what it’s worth, apparently VCO analog synths are really stable at 10 degrees F.

I only know this because I froze my ass off on an outdoor show in Vail Colorado last night and was “praying” nothing went sideways.

At 98 degrees F a MS20 full size completely shits the bed and a Prophet 6 refuses to calibrate to 100%.

Everyone, build an ice cave. 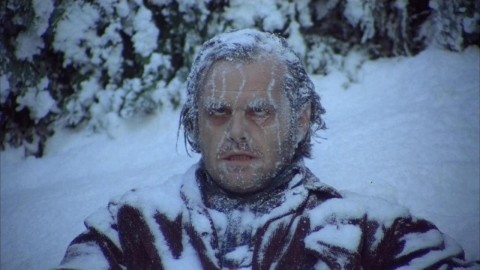 Well I’m glad I haven’t had time to even go look at my studio recently. The weather has been jumping between 30 F and 55 F day to day and we had tornadoes touch down in Kentucky and Ohio in DECEMBER. Suuuuuuure climate change isn’t a thing…

Last night I pre-ordered a Twisted Electrons Blast Beats, its a new FM Drum Machine made with a 1988 Yamaha FM chip YMF-262 that you used to find in Soundblaster sound cards.
They are doing a limited first run with the intension of shipping by Feb’22, £533 I couldn’t resist as it sounds like 90’s IDM out of the box.

Damn. We’ve been doing the 40s-50s to 80s jump here in Texas. Had some bad storms but no tornados that I know of.

In other news, Behringer finally got back to me and told me the Wasp manual is a typo and it draws 12W, not 2, and that I should refer to the back of the unit and the power supplies; about what I expected them to say. It’s a pretty generic/CYA sort of answer.

Meanwhile, my Wasp and K-2 seem to happily exist on a +12V rail that’s rated for 2.2A. According to ModularGrid my rack should be drawing 2.3A on the +12V rail if the Wasp is indeed 1A

I don’t know anymore. I’ve literally had the K-2 and Wasp singing on all oscillators at once with the volume up pretty high and everything just keeps going. I can’t help but think back to the Mother-32 and its 1A power supply wall wart, while only drawing 230mA from a eurorack +12V supply. Even Behringer’s own Neutron is rated at 750mA and has a similar architecture.

I don’t want to run my power supply at maximum firepower, either, and overheat it. I also have a hard time believing these things designed to be eurorack mountable draw 1A. There are some “big VCOs” that draw more than an entire Mother 32, though, too. Have I mentioned I worry a lot and often talk myself out of things for no reason? XD

Last night I pre-ordered a Twisted Electrons Blast Beats, its a new FM Drum Machine made with a 1988 Yamaha FM chip YMF-262 that you used to find in Soundblaster sound cards.

That sounds great. And a section of their YouTube trailer is literally called “90s IDM”

But I have no monies for something like this atm. Alas… I also wanted a Deton8 and HapiNES, too. And a MegaFM…

Joranalogue makes a DIY kit to plug inline with a eurorack power supply, and you can power modules off it to get a read on their current draw. My solution to this power conundrum has become clear…

Edit1 I also found a tutorial on DIYing a cable that converts v-trig to godless s-trig, it’s just a resistor and a capacitor soldered in with the jacks. That should be easy enough to make work.

The weather was so insane here in Ohio, they were telling some people to sleep in a sheltered area of their homes.

I have a really old BBE Sonic Maximizer 262 laying around. I might have to try it on drums or a synth or two…

I’ve been watching the news of the terrible devastation in Kentucky, my thoughts are with those people.

I’ve been watching the news of the terrible devastation in Kentucky, my thoughts are with those people.

I didn’t realize how bad it was until seeing your comment and taking a peek at the news. Same from me, that’s such a terrible thing to happen, and so bizarre for December even in the MW and south.

Climate change is obviously an issue, with the main problem being carbon monoxide emissions poisoning our atmosphere. If an oxygen breathing life form is exposed to CO in an enclosed space for more than a few minutes, death is inevitable. That’s why I don’t own a gas powered machine, and walk everywhere. The oil indu$try makes too much money to allow the media to announce what’s really causing these worldwide calamities. 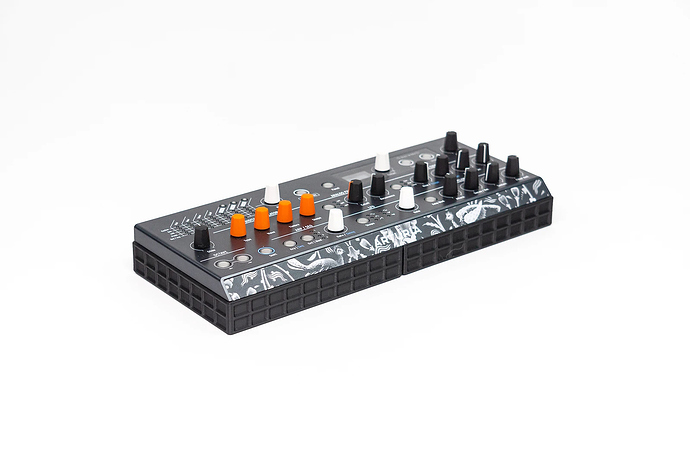 A synth demo I did awhile ago:

I opened my ailing Yamaha TX16W that says “Memory Failure” when I power it on (and the RAM has been replaced twice). I bought it for cheap off Reverb hoping it was as simple as replacing the RAM for a nice score… Nope, that didn’t happen lol (and the guy packed it like absolute garbage and then ghosted me

). Still under the price of them selling currently if I can get it to work, but I have no idea what I’m looking at either

I was told it’s probably something between the RAM and the CPU which is potentially the YM2409 chip that reads waveforms from RAM, it generates the voices. So I guess I need to learn how to check digital chips for function (somehow), as I can buy the chip itself still. There’s a few boards inside this thing, and as a whole it looks really great; the only dust internally is on the power supply board (which I cleaned up with some air). There’s two large electrolytic capacitors on the power supply board that either leaked or were glued down somehow; there’s no space between them and the board itself so it’s hard to tell, and the possible leak didn’t go far at all which is why I thought it might be some sort of glue. The sampler powers up and seems okay. I guess I could replace those caps just to be on the safe side; it’s from 1987/88 after-all…

Edit 1 All the really big caps on the power board have this brown stuff there and are solidly on the board like they’ve been glued in place.

Edit2 The insides of someone else’s TX16W had the same brown stuff and didn’t recap, everything measured properly… 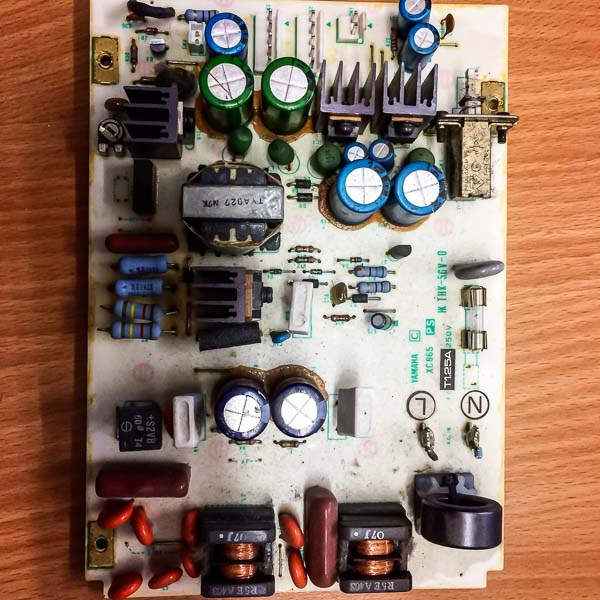 Another synth demo of my Moog Voyager:

Looks good, but I really like having that keyboard