It seems cool but I’m kinda sorted on the sampling side.

It seems cool but I’m kinda sorted on the sampling side.

Absolutely same! Literally half my sound making gear are samplers LOL. I was watching a review on just the FX and it sounds good but I’m not buying it for that.

Much of this will probably be repetitive to some things I’ve posted here and is x posted to Elektronauts…but I’m really trying to figure out whether or not the Digitakt is worth keeping. I love it. I have no complaints. Just compared to the SP-16 more and more I think about all the cross over and lack of features on the DT the SP-16 has that are very important to what I want to achieve.

Much of this will probably be repetitive to some things I’ve posted here and is x posted to Elektronauts…but I’m really trying to figure out whether or not the Digitakt is worth keeping. I love it. I have no complaints. Just compared to the SP-16 more and more I think about all the cross over and lack of features on the DT the SP-16 has that are very important to what I want to achieve.

So, my goal for a long time has been able to improvise versions of my own studio tracks (tracks I begin on hardware and finish in my daw) during DJ sets. I make dance/disco/house/techno…whatever…tunes you dance to : )

I recently got an Pioneer/DSI Toriaz SP-16. It syncs directly with my CDJs via DJ Link and the time stretch/pitch adjust is excellent between the 3 devices over an Ethernet switch. So, basically tempo/pitch correction is taken care of automatically between the SP-16 and whatever the CDJs are playing. Additionally the SP-16 will turn that data into MIDI and send the correct tempo to any of my other hardware making anything easy to beatmatch with CDJs and SP-16.

My basic setup would be 2xCDJs and 1xSP-16 routed to a 4 channel DJ mixer. I have the aux send going into the SP-16 inputs if I want to live loop.

Having had the SP-16 for a few weeks I’m absolutely in love with the work flow. It works great with the CDJs. It has a proper song mode. It exports .wav of all sixteen tracks separately either per pattern or per the entire arrangement so it is super easy to finish things in my DAW. And the variety of FX is larger and they are usable.

I’ve not yet tried to deconstruct a DAW-finished track back onto the SP-16 for a more polished performance. I but I feel like that won’t be an issue as it handles loops as well as one-shots. Even if this ends up being problematic, the SP-16 offers way more in terms of performing “raw” versions of tracks alongside my CDJs than the DT does (unless you all can tell me otherwise)

The DT has “nudge tempo” and no proper time stretch nor song mode. Less FX. The only thing it has is the probability sequencer stuff. With a proper song mode, 16 audio/midi tracks per pattern and 16 patterns per project I don’t really need or want it (random things happening isn’t my bag when I’m DJing). Using a DJ mixer switching to new projects isn’t a problem, there won’t be a gap in the music; I can also preview over headphones what I’m setting up before the audience hears it.

I love the DT but I’m hard pressed to think of a reason to keep it. For building tracks it doesn’t offer much the SP-16 doesn’t. I do like the DT workflow, so I’m going to try Overbridge again and see if I can get it to work with FL Studio. Its MUCH smaller than the SP-16 so I could easily take it out of studio with my laptop to use as a studio tool.

Other than that I’m at a loss. I’ve got a free channel on my DJ mixer I could use the DT on, but I also have a RD-8, TD-3 and M:S which all much more immediate for improvisation during a performance and because of the way the SP-16 can translate tempo from DJ Link into MIDI the fact that the DT has tempo nudge doesn’t matter, everything else is easy to beatmatch with the CDJs and SP-16.

Also, my brain can’t handle much more than 2xCDJs and the SP-16. Anything on that forth channel would be like drum fills and ear candy done on the fly.

I also really don’t even want to buy anything else if I sold it.

I’d say if money and space aren’t a concern, hang onto it for a bit and see if you ever want to use it. When I got the Super6 this year, I was sure I was going to sell my Rev2 when I needed more space. But after having them both here for about 6 months, I realized I really enjoy using them for different things. Sometimes I want to play one, sometimes the other. So I need to make a bit more space, which thankfully is possible for me, and the money isn’t an issue so I decided over the summer I’ll just hang onto them both until such time I’m not inspired by one of them. Both are included in my future plans for what I want to do with my setup until then.

EDIT: I meant to say give it 6 months to year and if you don’t have any desire to play with it, I’d sell it along.

Thank you. I’m honestly very confused on this on as I’m at a point where I really don’t need or want stuff around just to have it. It ain’t even a money thing at all. I mean…I’ve got one of my new pieces on payment plan but I can easily afford it. But honestly part of it is my work space (physically and mentally) feels a bit crowded. I’ve got three got’dang samplers and I’m trying to figure how anyone (specifically me) would possibly need that.

Sell the Digitakt, prices are quite stable so you shouldn’t make a loss and you might be able to get another one later for more or less the same. Focus on what’s working for you and keep riding the creative wave while it lasts

in other news I said the “wrong” thing and instead of being referred to an outpatient program like I wanted, I spent 10 involuntary days inpatient in a mental hospital. what a shitshow lol (I’m fine). AMA XD

SP404 MK2 caught my eye but not as a sampler, I’m looking at the DJ function and thinking I could fill it with my tracks and use it to DJ at parties etc but I need to know more about the DJ function as all of the reviews I’ve seen just brush over it quickly.

Oh wow. I didn’t catch the DJ mode. That is something I did not need to know lol. It is a curious notion as the SP series has always been pretty live use friendly (at least from videos and such I’ve seen). Makes me curious what it could possibly be.

What is the DJ mode? It somehow simulates a digital deck or something?

I’ve not had a chance to dig into what it is at all personally. 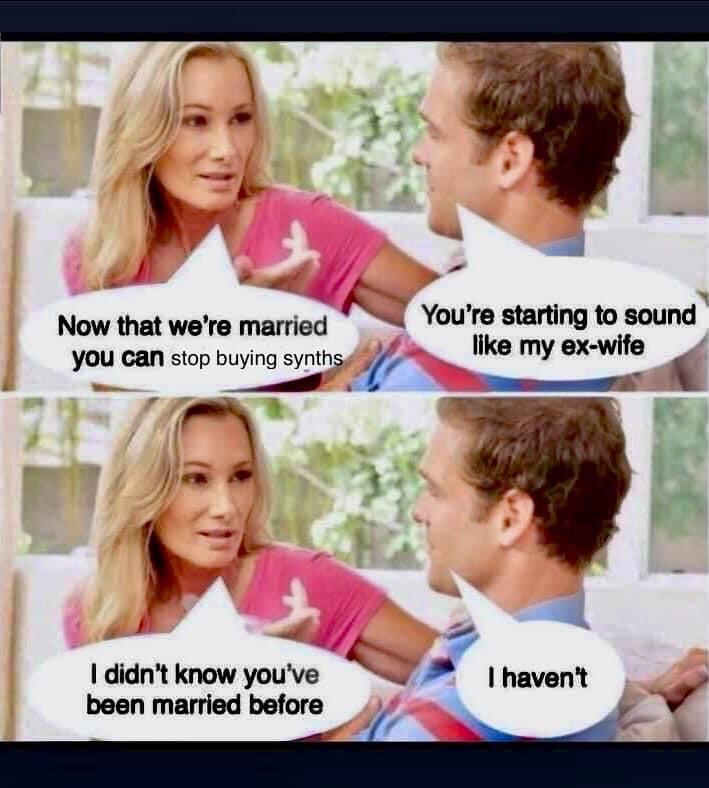 I got some praise for getting rid of two mixers the other day. Wife points!