If Arturia would just release a module. though yeah it’s smol. The uFreak is another of those lovely digitals on my radar I just never got.

In other news, I regret buying a Prophet controller to an extent, as the Keylab mkII handles the main parameters nicely (cutoff and resonance on the first two knobs, both ADSRs on the faders, haven’t explored too deeply and haven’t made any user stuff.

I’ve spent the past half hour playing a pad through Delay: ETERNITY and Reverb: INTENSITY and it hardly feels like I’m using software once the FX are set and forget. That said, I wouldn’t mind hanging a Nightsky off one of these 18i20’s outputs and inputs… And Bitwig made the Keylab mkII integrate really well (which Arturia seemed to take a little cheeky credit for when they said it works with Bitwig in DAW mode but made no mention of magnetic templates or how… kinda how they did Emilie with the uFreak lol

Nice having keys again. I’m not a big key player, but I like having different types of inputs. Keys, Pads, Grid, EWI, outright programming; I do things a little differently with each method and tend to get different results. And the Chord Memory mode on the pads has me playing housey piano chords immediately lol…

…I want to McSlap Soundforce for giving me a dinky 3 foot/1m USB cable with the Prophet controller.

As a whole, feels like a nice solid controller. I can’t wait to see it in action with Prophet V compared to the Keylab mkII

The perfect recipe of bottleneck city

I don’t think you’d see a bottleneck unless you’re trying to record a whole mess of tracks at once. USB 2.0 can realistically record about 40 48kHz/24bit inputs at once without issue.

Yeah, if you’re using a card from the mid-90s. PCIe 3.0 x1 (which is likely the slowest thing you would put in a modern PC) is 8GB/s, so 20x faster than USB 2.0. If you’re using a card more than 10 years old, the gap starts to narrow, but not enough to actually make a difference.

What PCIe also gets you is direct bus addressing, which basically means it a straight pipe into the CPU, whereas USB has to hit a bunch of chips along the way. PCI always gets you better latency, usually to the tune of about twice as good. Also, PCI cards will let you set ridiculously low buffer sizes - like 4 or 8, without dropout.

In most reasonable cases, PC audio is limited by the CPU’s ability to handle the incoming audio and the hard drive’s speed to read/write it, not the transfer process itself.

Assuming 48kHz is an acceptable sample rate as it’s above the range of human hearing, there’s no reason a home user would ever need anything more than USB 2.0 for audio devices (assuming reasonably good device drivers, which is obviously hit or miss).

Got a Bose Soundlink Revolve bluetooth speaker. Doesn’t get super loud but the fidelity is pretty damn good. Good enough bass response to play fun music. Plenty of power to put on while people socialize or play a party game. Battery life is pretty good. I’m sure it isn’t at 12 hours at full volume but oh well. As a pretty good water resistance rating as well. Also, they wanted me to pay for a charging device so it’ll play and charge at the same time which I thought was a pretty big “fuck you” by Bose but I got them to throw it in for free.

For the money I don’t think I’d have done much better and at this point I’d rather have something that sounds good versus something that is just loud.

much like the Analog Keys I was able to try, this SFC-5 does fuck all on MIDI input… sigh. Well it’s built nice, I guess. Or it’s Bitwig being a pitfa about MIDI.

edit got it “working” but their Arturia mapped presets are trash and the Prophet V3 is some bullshit from 2014 and the cutoff and resonance knobs change presets. Le sigh, again. I sigh too much when dealing with other people’s shit…

edit 2 yeah I think I’m returning this piece of shit. Randomly changes presets on some knobs, cutoff and res guaranteed, oscillator levels sometimes… what a shitshow from a company that calls itself “boutique” lol… (maybe I got a bad one, I don’t know… not a good first impression…)

edit 3 Same behavior in Studio One, and when I open the mapping website (hate those…) I have no idea why it is changing presets, cutoff is set to CC 29 on the hardware and software. Mistakes were made… returns are a pain…

Thought id share this incase it happens to you.

A friend got in contact with me yesterday said he bought his son a Big Muff pedal for his guitar and he’s snapped the audio jack inside the socket, his son was gutted as he loves the pedal and playing the guitar.

My first thought was to replace the socket, however it was soldered by six legs and i explained id probably damage the board as me and desoldering don’t mix.

I scratched my head for a while and then came up with an idea of putting superglue on the end tip of an old broken screw driver and pushing it inside. The second i pushed the screw driver in i moved it slow around in a circle motion like you’d move a joystick to ensure the glue hadn’t bonded anywhere else, then left it over night as the instructions stated 24hr for full bond.

This morning I had to yank it with quite some force, a pair of tweezers or the like was never going to remove it.

The moral of the story “Don’t buy cheap leads” 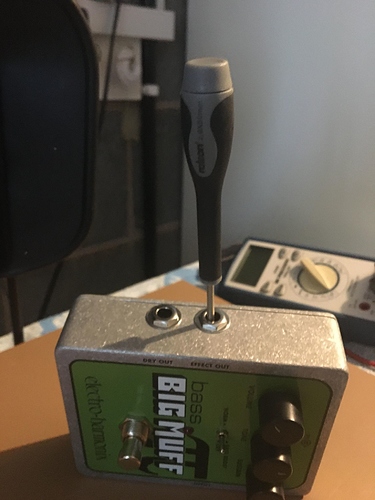 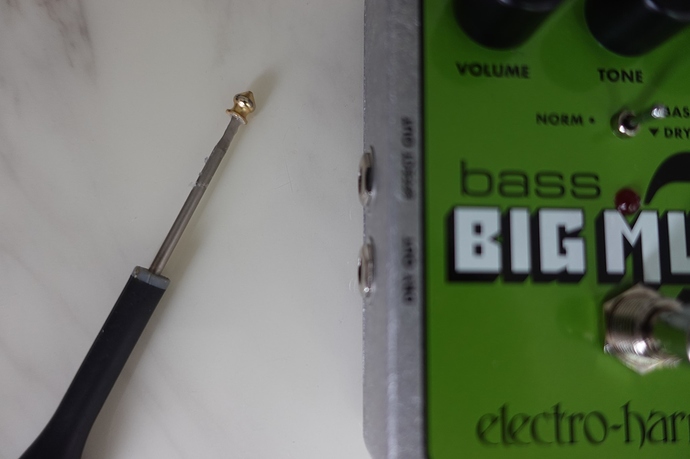 Naturally this SFC-5 thing is working fine on a Mac. Because of fucking course it is…

I swear if he tells me to take it off a hub and use a direct connected USB port I am mailing it back to him with a middle finger taped to it -_- (it’s on an internal hub on the MacBook and plugged into an external dock/hub thing.

All this troubleshooting nonsense is just not worth it sometimes.

edit remapped the controller and Arturia to a different CC and it all works. FFS

I feel a lot of negativity, remember hardware is your happy place, breath.

true, I’ve been up for 6 hours on a few of sleep, and it was a few hours before my morning med

Venting I guess, I need to stop that at times. I emailed the developer just now and asked them what I should do, and will go build my Sidecar finally.

On the other hand, the Hydrasynth and I are getting along better. On this track I programmed all the sounds myself, apart from the drums.
The reverb is from the HS, only some eq and sidechain from the Force.
I really like the sense of space it creates.

Don’t miss the riser leading to …

nothing, this is just a draft…

as soon as he asked me if I tried manually mapping, I realized I hadn’t saved anything in the Arturia MIDI config when changing things to manually map it. So it kept reverting

All is well, now. Except for this massive desk putting the SFC-5 at an awkward reach with the keyboard tray at full extension…

Watching the assembly video for the Sidecar is giving me anxiety in a bad way, just like it did last week…

edit or I can turn it sideways next to the keyboard

so if I tuck the Keylab up under the desk so only the keys are exposed, the SFC-5 is in easy reach and normally oriented, and it feels like that scene in The Matrix where Cypher is betraying the group and eating that steak, commenting that he knows it’s not real, but his mind is telling him it’s juicy and delicious XD

I think I’m halfway to a real Prophet 5 module at this point, though lol…

The post withdrawn was just more of me bitching, so I removed the temptation, put on my big girl panties, and got to work. And the Sidecar doesn’t fit so well, but it’s built. After a night’s sleep I have a new plan to put it someplace near but out of the way. It’ll have the Minibrute 2S on top, 2400 on its shelf. I’ll have full access to my closet again, a cute little beanbag sanctum beneath my bed where I can drag the Maschine+ and some headphones, and my new cat seems to like it under there, too

I might use my old single monitor mount to hang a 24" 1080p display I have laying around beneath the bed and hook up my Commodore there. I have options with every new idea; they should hire me for one of those tiny home shows lol…

Don’t mind me, just chilling on the floor… 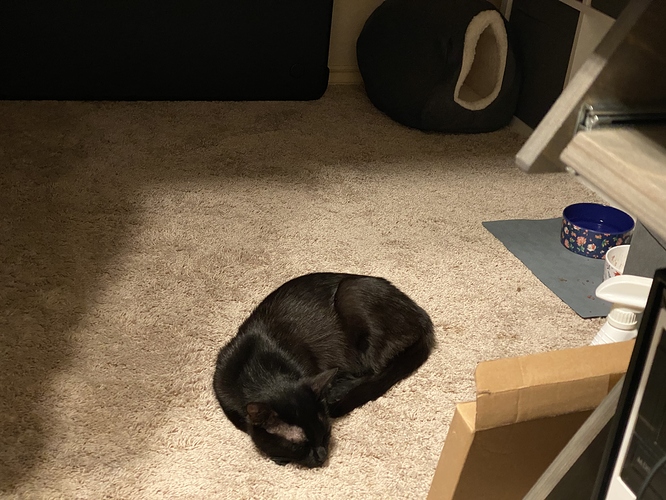 It’s a sunny spot after all…

lol that’s just the lights overhead. They do have that wavelength going pretty well. I usually don’t have them that bright. I wonder if she thinks its sunlight despite not soaking up heat…

I had this one around me all morning. 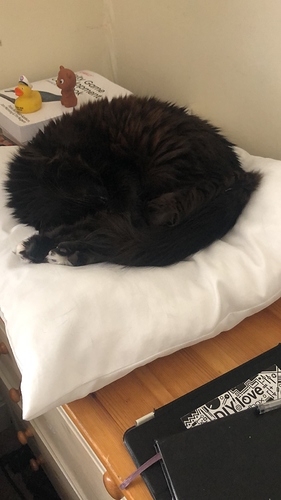 We’re making an offer for a new flat, in general we’ll get more space for less money but my workroom/home office will feel smaller due the slanted ceiling which also means no posters and not being able to raise my desk to a standing position, which is a bummer…

But this will give me the chance to add:

and Sweetwater just emailed me that Behinger K2’s are in stock… but I don’t want to spend $300 right now.

I’m sure there’s a module to handle that, but that’s why I don’t have a 0-Coast. I want one, but I also want a scale quantizer. For that, I need a module, and that means getting a case, no matter how small, that is going to have some empty space. And at that point, may as well get some of the other modules that have always interested me. Next thing I know, my shopping cart is at $1500 for a $500 synth. No, thank you.

I have a watch box with some empty spaces, and that has cost me almost $1k this year, I don’t need anything that will lead me to eurocrack in my life.

Moral of the story, just use MIDI.