Considering I don’t make music professionally so a groovebox over the other is just a curiosity thing, your reply made me look for the Maschine price…
Let’s see the progress of the Force first, tbh my only complaint is with the step sequencer…

it was a bit of a decision. It wasn’t really on my radar until I realized I could make Reaktor ensembles and load Kontakt libraries. It had my curiosity but then it got my attention at that point. The Akais do a lot of things better for sure, the Maschine does a few things better, too, imo.

At the end of the day, as long as people are happy (or happy enough) with their gear, I’m happy for them.

I’ve considered a Tascam mixer like that, but I like those prices better… and there’s a rack version that takes up 3U, and I just so happen to have an empty 3U on my new desk. This almost seems like providence…

To be honest, if I sorted my space I could just add a Maschine MKiii, standalone is not 100% required as my laptop is 20cm away and my screens are by the gear anyway. And a Mark iii is cheap as dirt 2nd hand

Much cheaper than decksavers (who have been booped to make a S2400 cover but as yet they don’t have enough interest). 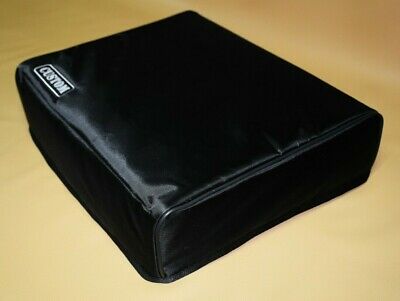 , that doesn't fully enclose the device and is open from the bottom ! You just landed to the heaven of custom amp, cab, keyboards, speakers and gear covers! Yes - they trust us because we can! - Padded 10mm layer for impact protection;.

fitment has been reported as excellent on the S2400 forum.

Another option might be the 1010 Music Blue Box. I have one and like it a lot. Very easy to do multi track recordings and the price is decent. A real space saver as well.

lol I was literally just looking at that

I tend to have really, really bad luck using TRS and Y cables to get two signals into/out one single jack, though

lol I was literally just looking at that

I tend to have really, really bad luck using TRS and Y cables to get two signals into/out one single jack, though

Hahaha. I totally blew $50 figuring that shit out. But mostly because I insisted on trying adapters so I could use the instrument cables I already have. If I would have just bought brand new cables Id have beem fine.

I thought I had cables for it. One was literally a TRS on one end and two TS and I only ever got sound out of once side. Several times. I think I’m managing to buy cables meant for inserts/returns or something…

that’s what that sounds like to me? I’ve not usually had problems with y cords in the past but for some reason the Blue Box threw me for a loop

I’m going to try some that specifically say “stereo breakout” because I know that should be possible. Or just say to hell with it and buy what I need to make my own cables; I know how to solder.

As I want to slim down, something like the Bluebox would be a good way to do it; I actually used to limit myself to what an Octatrack could handle on its inputs.

Really I’m thinking about pulling an auto meh geddon and just getting the Hydrasynth I’ve wanted for ages and calling it a day. Or just one $2000 uber synth like a TI2, Iridium, etc and use it for everything vs a bunch of cheaper, more specialized synths. I’m comfortable with DAWs and enjoy using them. The most productive I’ve been with hardware was when I just used an Octatrack, or just an OP-1, just an MPC, etc.

I think the Bluebox would be a good step in that direction, and it looks like I can integrate external FX via the outputs and keep some inputs open, but I’d have to research into that.

I also want to use my Axolotl boards. I got four from Indiegogo a few years back, and actually started making a drum synth with one using a Quneo I had laying around for a controller and it was working pretty well other than the kick and snare taking something like 35-45% of the available DSP power lol. But that’s still okay since I’d just need some hats at that point, and was working on trying to design an 808-like circuit for that when I stopped. I can design and 3D print enclosures, and a friend of mine has a laser cutter for acrylic even; I have options for making my own synths and effects, too, which is why I wanted the Maschine+ with Reaktor in the first place.

In other news, Juno.co.uk sells decksaver covers for prices that are much more sane…

If memory serves I believe there is a path an aux send path possible in the Bluebox. I’ve only used it as simple multi track recorder so far myself. But it is way deeper.

Or just one $2000 uber synth like a TI2, Iridium, etc and use it for everything vs a bunch of cheaper, more specialized synths.

My setup has typically been in constant flux searching for the perfect combination of pieces. I’ve come to realize that doesn’t exist. There is always going to be give and take and sacrifices I’m going to have to make in a smaller hardware setup. That said I’ve had several “uber synths” over the years. Most recently I borrowed a TI2 rack from a friend of mine who had some studio gear he is trying to sell. I was considering buying it for its versatility and multitimbral capabilities. I had a Blofeld just before, on the other end of the spectrum price wise, but for the same reason. Multi mode.

I realized, while great on paper, I have no desire to actually play a synth like that. The TI2 sounds great, I’ve had several virus’ before lol, but for me the point of a hardware setup is in quick access to the most commonly used parameters. A multitimbral synth just doesn’t provide that given the fact that the patches are buried underneath one another. The most satisfaction I’ve had recently has been with my two, knob per function mono synths. So much so I’m considering adding a third , calling it a day, and ending my search fir the one jack if all trades device.

For me the benefit in simplicity and immediate access to all parameters is outweighing feature set here by leaps and bounds.

@relic; there is indeed an aux send path on the Bluebox using either the cue or headphone out routed back into and of the main input channels. The send can be pre or post fader so it works really well.

I’m still in the learning phase of the Hydrasynth so maybe that is the reason but I noticed that when I just whip out the Microfreak and the Force I get something going in no time at all.
At the moment I’m focusing on making patches for the Hydrasynth and learning it more. It takes no time to get a sound as it has a great interface but it is also easy to create a patch that has too much and will never play nice with anything else.

After the next Force update I’ll decide if I want to try a trade it for Maschine Plus, maybe, don’t know, keep changing my mind.

PSA: all Moog apps are currently free on the iOS App Store, including Model D and Model 15

Good catch! I already owned a couple but now have the rest.

I think you’re definitely right about that. There’s also no way I’m giving up my MB2S. I have a small space and while a DAW is much more space efficient, controls to act on are just so much fun. Heck, I used to just sit down and play a MicroBrute through a delay and reverb for hours on end. I tend to hyperfocus and right now that focus is on my music gear and paring it down; so I try to talk about it and get input from others, because selling my Monomachine is something I still regret years later lol, and sold it for some of the same reasons. I told myself I didn’t “use it enough” but at the same time… so what? I don’t play every single guitar or bass I own on everything. The fretless isn’t appropriate on everything, neither is a Strat.

Maschine+ and the Proteus can handle all my VA/digital poly synth needs, so focusing a bit on knobby monosynths is not a bad idea and I have a couple good ones. Plug a few things into a Bluebox and leave two inputs to work with external effects, and I’d have a small, concise hardware setup that could do just about anything I want.

My biggest problem with gear collecting is that I simply like sounds, and selling is hard due to the anxiety of dealing with people to do so. Sounds settle me. Sounds ground me. I don’t make a lot of music, but I sound design and play with sounds a ton, sometimes just to calm down and enter a peaceful state of mind.

The two things I’m most passionate about are making music/sounds and stock trading (lol… options really, but do not get me going). People notice it when I talk about them, tell me I inspire them to do something, etc. So this reorg right now to get a hardware setup in play again is pretty important to me, so thanks to everyone for all the ideas and idea bouncing, and listening to the rambling as I go on and on and on XD

Remember you don’t have to get rid of what you don’t use, unless you need to unlock the money. You can put them in a drawer/on a shelf and focus on a desktop pair, Maschine/MPC plus a synth. This will give you the sound explorations opportunities and the focus

that was a bit of my point. Not everything has to be used at once, and my new plans include a storage area for just those sort of specialized things that won’t get used every track. Like a purple 303 clone