Yeah, that one has been on my wishlist for a long time, and I had forgotten why exactly, so I revisited some reviews and YT vids…what a great sounding pedal. the Mercury7 seemed “too limited” at first, what with only two reverb types…but then I listened to it and really started to understand all the options it has. I am super excited to try especially those two out on my guitars. the Ottobit just sounds amazing too, and so many nice features built into one pedal. I hope they ship soon!

Yea. I feel like I was reading praise about the Polymoon and Ottobit recently.

@Creepr your mention, I think, was the first I heard about it the Ottobit…maybe Polymoon too.

All 3 sound outstanding, judging from the interwebs. I will post some noodling wirh them next week.

Also, I am gassing for a bigger reverb pedal. bigger as in longer decay and such for more ambient stuffs. the Bluesky is on my radar, I like the big knobs…any other secret ambient weapons you guys could recommend, that come in under say 350?

I have an Eventide Space fantastic pedal, however for months now the Oto Bam has been my go to reverb, its input gain is an analog diode clipper circuit that sounds great when you drive it. Take a listen to this clip where i’ve got a simple sequence running in the Matrixbrute which is hooked up to the Bam then i slowly increase the gain of the Bam, it takes the sequence into David Carpenter territory “Harmonic city”, because its added gradually its only at 01:53 when i pull Bams gain off do you realise how much it was adding.

I had the poly moon / mercy 7 combo once for about 4 months. Great pedals. I liked the mercy better than the poly but I think that’s just because it was one of the first high quality verb pedals I played with. I think you made a great choice here. I’d love to hear what you think of the bit after you’ve had time with it. I love glitch pedals.

Man Cane, that is a nice sounding pedal.

pretty gritty, but huge sounding. I looked at the Oto stuff when they were released, and everything about them seemed pretty cool. at least the Bim and the Bam. I have not checked out the Boum yet. The Eventide was also very high on my list…in fact it was at the top and the Mercury 7 was not on it at all for a long time. I decided against it mostly because I just fell in love with the sound and functionality of the Meris pedals when used together. That seems a weird concept in this day and age of mix and match, especially on effects. Who cares if your distortion is from RAT , fuzz on top from Digitech and your delay from BOSS going into a Earthquaker verb right?

I think there is some high value though, especially when it comes to “playing” with pedals, which we do a bit more on synths than is usual for guitar work, to have a more consistent interface and strategy. Oto gets it, with their three nice desktop pedals, Meris has a similar thing going too. Anyway, that was my reasoning for pulling the trigger on the Meris pedals, but an Eventide would definitely be welcome on my desk one day. I have the Blackhole VST and use it quite a bit too. Love that thing.

The Meris Polymoon was on my to buy list for a longtime and I just never got around to it.
It my birthday in June so I’m thinking of treating myself to a Oto Boum simply because it’s 100% analog and I think would work well as a end of the DAW mastering chain warming box now that I’m finally integrating the patch bay my wife got me for Christmas into my set up it will make mixing my hardware with software seem a little less hassle therefore more likely that I’d use.

I bet that will work out well. The “easy to use/less hassle, so I will use it more” thing was definitely part of my decision process for all my recent purchases.

That is part of my reduced setup and part of the decision of only keeping 1 item on my desk apart from the Force, the workflow is now easier and I get more done

Started a new track today… using an interesting acapella sampled from YT into the DT. Then using the TD3 > Rat 2 pedal > Tone Beast and the RD8.

The tone shaping with that TD3 signal path is very nice, there are a lot of sweet spots.

I feel like I am finally getting that more minimal vibe Ive been after w/o the mix feeling empty or arrangement feeling boring. Just drums, acid lines and vocals manipulated on the DT. I tried adding in something from the Monostation and it just didn’t fit.

Also like playing with the RD8 toms to fill out the low mids. Always liked that vibe. I don’t know what a real 808 sounds like in the studio. I like how the RD8 sounds.

came across a weird thing last night after hooking up the OTO Bam to the patchbay, baring in mind i’m a patchbay virgin

I basically had the master channel of Ableton leaving the computer and into Bam then out of Bam back into Ableton all was well except i noticed when i pressed freeze on Bam it would work as normal freezing the sound but if i played any notes over the freeze the notes would be dry, yet when i turned off freeze and played the notes they’d then be wet, how very odd.

i need to get this working perfect if i’m to buy a Boum to put on the master which is why i was experimenting with Bam.

did you ensure you are not routing the audio twice? I had an issue where I was using my hw synths with vst effects and my audio interface was sending the dry signal directly to my speakers as well as the daw. I did not notice at first because the dry was blending into the wet signal so well. I had to mute the direct output to fix it. 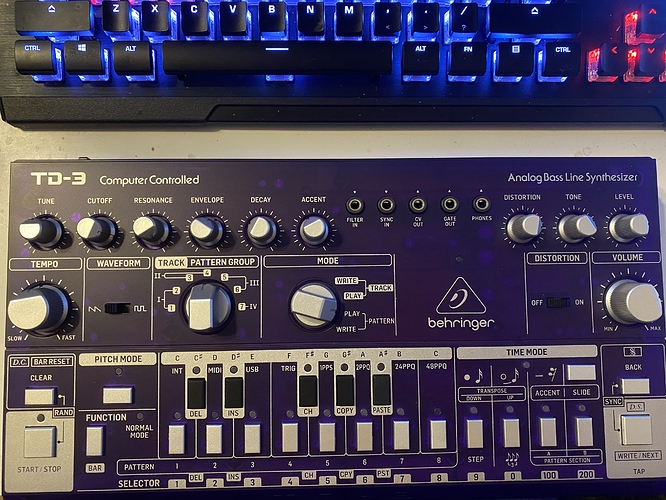 I don’t have my interface and such setup atm. It arrived three days before they said it would, pleasant surprise all the same. It’s obviously plastics and cheap, but the knobs have a surprising amount of resistance to them. Almost too much! But well, using headphones it sounds (and acts like as far as I can tell) a 303, of course. The distortion is nice enough, simple circuit like a Boss DS-1 or something. I’ll have to try my Darkglass B7K with it eventually 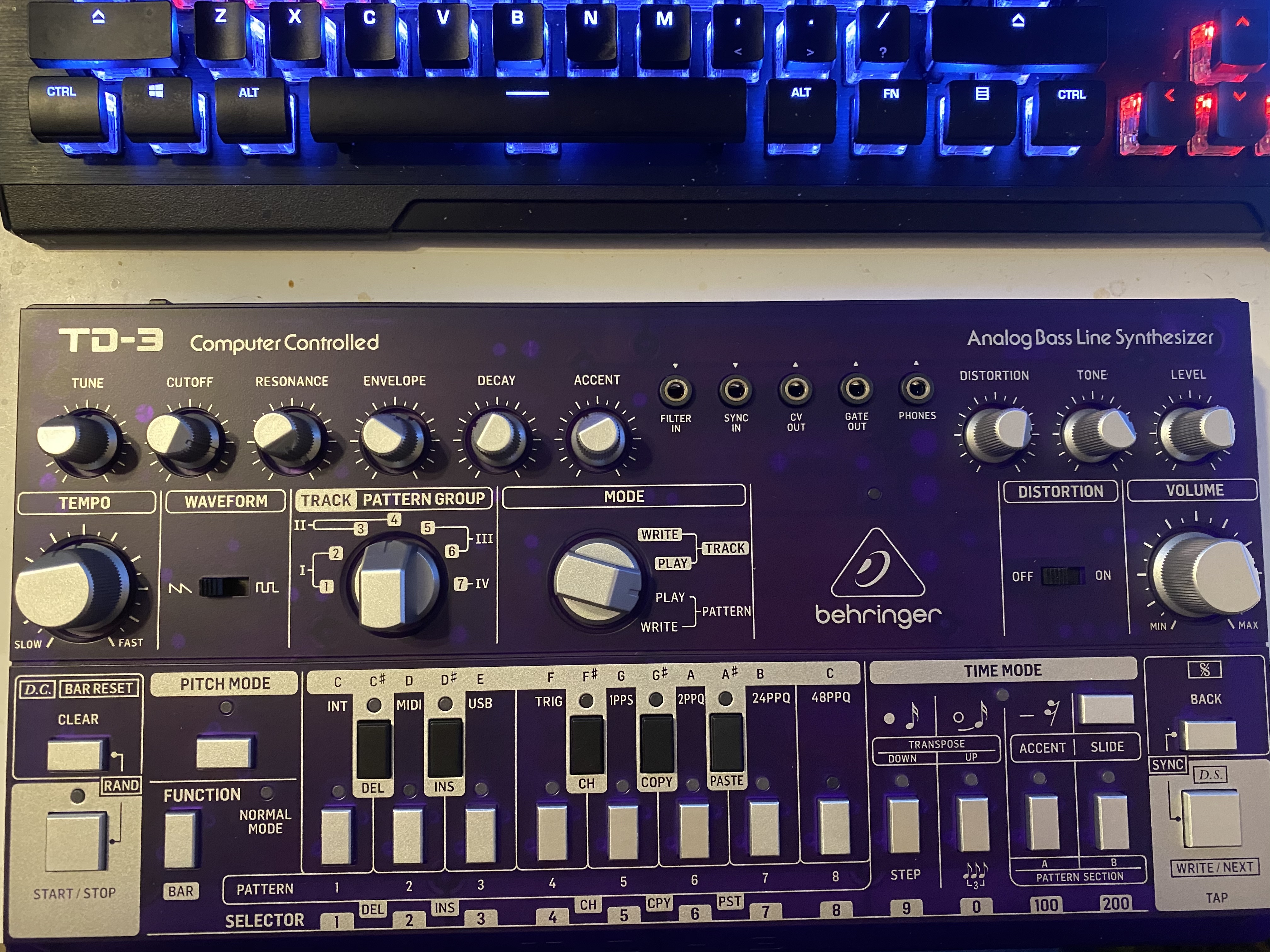 I don’t have my interface and such setup atm. It arrived three days before they said it would, pleasant surprise all the same. It’s obviously plastics and cheap, but the knobs have a surprising amount of resistance to them. Almost too much! But well, using headphones it sounds (and acts like as far as I can tell) a 303, of course. The distortion is nice enough, simple circuit like a Boss DS-1 or something. I’ll have to try my Darkglass B7K with it eventually

First…can I ask where you got your purple one LOL

And second, I agree with your review of the build quality. It weighs absolutely nothing, but the knobs are solid! Almost too much. I didn’t care for the distortion by itself but at some point last night I flipped it on with the TD3 running through the Rat 2 and the Tone Beast and got some almost chorus-y tones with all the extra harmonics going on.

Do experiment with lots of different kinds of distortion. I never knew you could squeeze so much tone from a simple 303 style synth.

My soundcard has 8ins/8outs, now i’ve hooked them and mixers etc up to the Patchbay God only knows

once upon a time, someone posted on a forum about “the best 303 distortion” (with clips) and it was some cheap knock off guitar pedal Aldi of Australia sells once a year in… February I think. I missed it on a trip by one week lol. Not sure who makes the pedals for them but probably simple enough to find out.

I got it off Amazon. For a long time it showed “out of stock” and then they had it for $117 or something, and I placed an order. Using my reward points I think I paid $70 for it? XD It didn’t go through and then went to “will ship when available, you won’t be charged until it ships, etc”. At one point they had them down to $109, but nothing was shipping anyway. At some time in… January or early February they emailed me and asked if I wanted to keep the order, I had been waiting and was content to wait longer, so I said sure. on 303 day I got the shipping notification and it was on my porch today.

Now third party people on Amazon are selling them for $288, or trying to o.O

LOL wow. So, you basically got lucky. I’ll just be happy I paid a reduced price for my silver one.

lol yup. blind ass luck. I always wanted a purple synth, except it was a FIZMO…

Had to google that one though I’d heard of it. Love that color : )