@Auto-meh-geddon I found that pretty interesting and enjoyed the jam part at the end. Has me wanting to look at more MicroFreak videos lol.

@canecreek rather enjoyed that : ) I really need to get my ass to the UK for some camping.

The Microfreak is super fun and playable, with many sweets spots. It does shine once you slap some effects on it and in the video the Korg NTS was adding distortion and reverb

My bitch with both the Drumbrute and their little monosynth was not enough sweet spot/they kind did just one sound. Good to know there is more going on with the Freak.

Been curious about the NTS too…how are the FX on it? My concern with the Volca type stuff is always the size how easy it is to tweak live.

With a selection of digital engines, there’s stuff for everyone, plus to my ears the filter sounds really good.
I still can’t get anything good out of the fm engine and a few others, but I might not have really looked too much into them.
On the other hand, the noise oscillator is pure gold.

On thing I truly miss from the Digitakt is the Elektron Stepsequencer. The Force is good but nudging notes left and right can be a pita.
Might get a 2nd hand cycles for the FM and the sequencer.

I really don’t see a reason to sell my samples. Ot does a lot for the money. For $300 you would get FM engines and an Elektron six track sequencer!

Fucking mix job has got me out of “creative mode” I need to finish this project and dive into eurorack stat. Additions happened, and i need a couple of other things… it’s FUCKING ENDLESS

I don’t even know where else I could post this so I’ll just leave it here:

I modded my friends TR626 today. posted on FB about it and Relic suggested i post here as well. Pics and explaination. 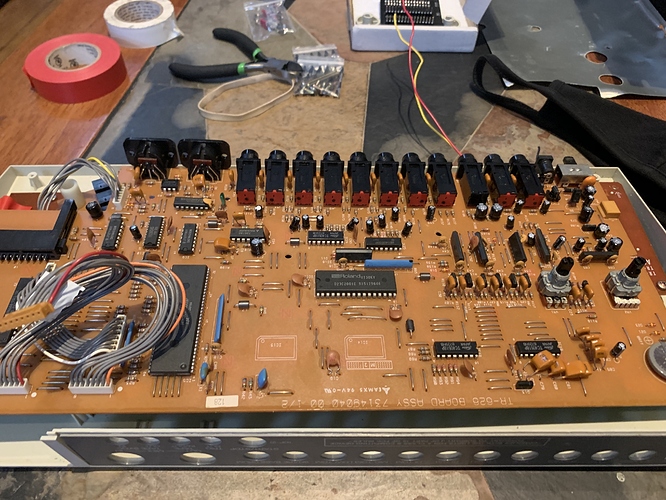 IMG_9903.jpg3952x2964 2.02 MB
Stock Roland TR626. That IC in the center is the sample content EPROM. Its soldered in and has to go! Its a delicate process as i need to keep it in order to allow for the box to operate in “standard mode” 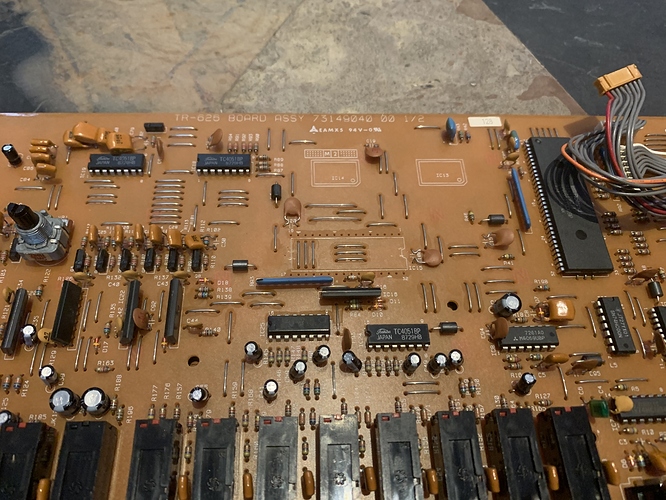 IMG_9911.jpg4032x3024 1.76 MB
Some time with an iron and a solder sucker (and a few choice four letter words) BADA BING - EPROM removed with no damage to the board, the EPROM or my mental health. (fingers and toes intact as well!) 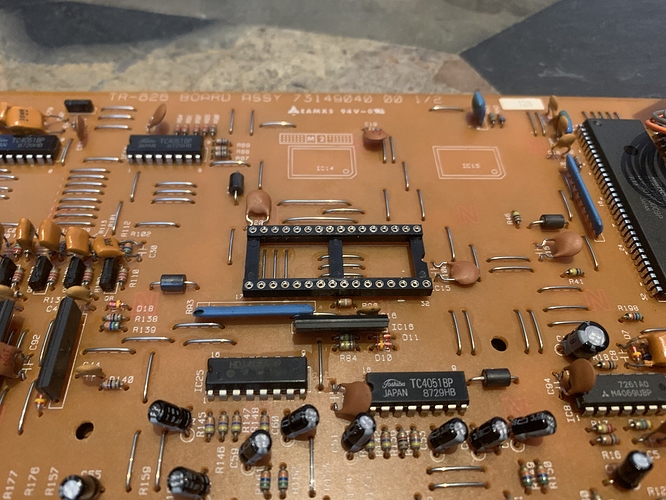 IMG_9913.jpg4032x3024 2.05 MB
To save hassles and for future proofing, an IC socket is added, this also makes the IC sit higher, which is clutch in this mod, as the new IC/EPROM is far larger than the old one. 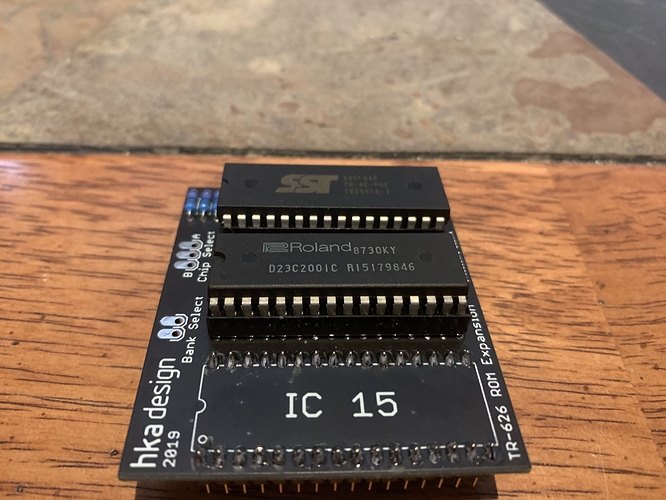 IMG_9912.jpg4032x3024 1.88 MB
Roland EPROM loaded up into the mod board. The IC behind it is the new sounds, and the pads to the left are for switches that allow for realtime “hot swapping” of the Linn and DMX kits. 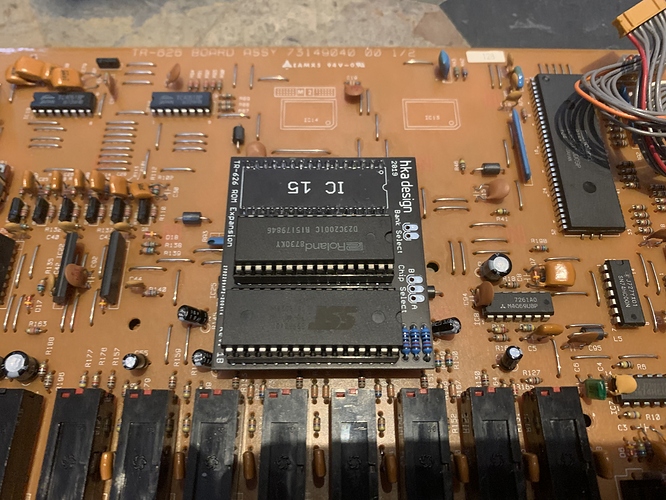 IMG_9914.jpg4032x3024 1.9 MB
as you can see the mod is significantly larger than the original, that socket supplied the additional space so it doesnt rest on any components nor short the board. i originally thought it didnt come with the socket and considered mounting this to the other side of the board to be safe, but it didnt fit well in the case that way and i realized there was a socket (it was underneath some packing material and there was no documentation of its existence) 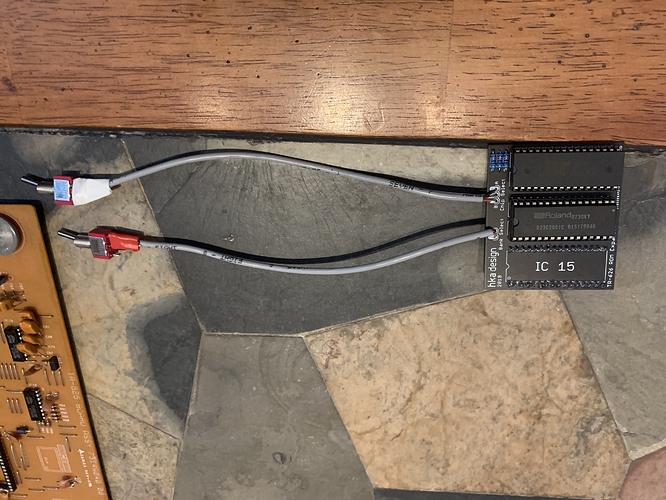 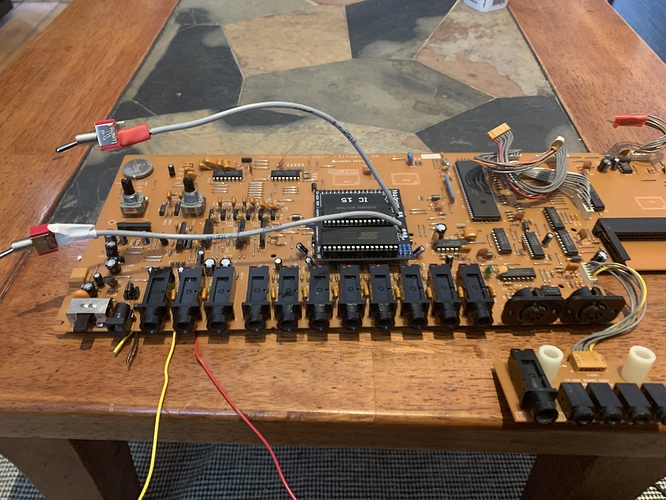 IMG_9916.jpg4032x3024 2.01 MB
mod installed with switches in place. i used some old 3 conductor mic cable thinking that it would be more tidy than 5 individuals but the shielding made those leads a bit more bulky than i would have liked, caused a bit of bulge on the 626 case. it was cosmetic only, so i kept it. 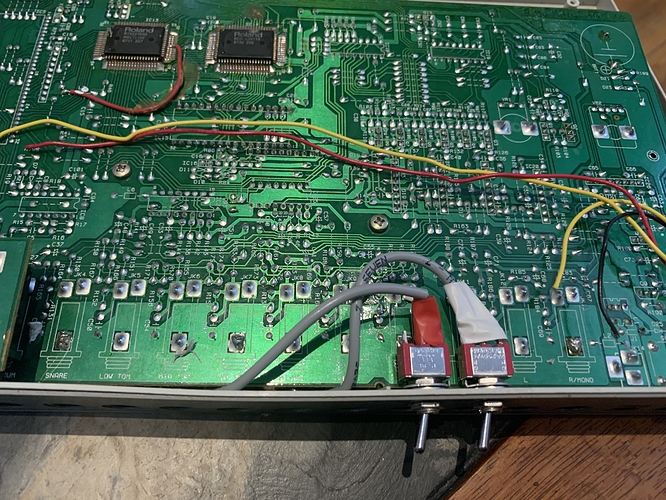 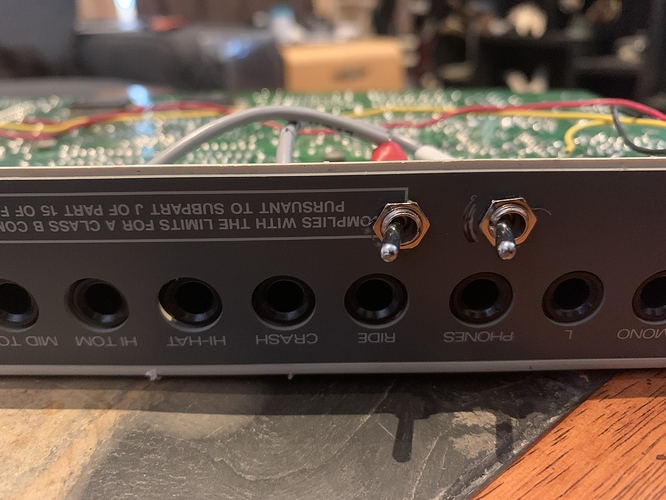 I’ve got a video of the thing in action, but i cant post here and i couldnt be bothered to post to youtube but the damn thing works and my client is happy. not a bad friday afternoon.

I don’t know why but this project has struck me as just really fucking cool.

Like… I’ve seen lots of common TR X0X mods and this is creative and interesting. Maybe its more common than I think? Usually on gear slutz people are adding midi or extra outs or something.

To come up with this idea an do it is super impressive to me.

Yeah dude, me too, super impressed you could do that and what an awesome idea. I bet you tripled the value of that machine at least. Great work there!

Sadly, it’s not the best camera angle because the mixer on the right is cut off where I’m bringing certain parts in and out.

The main thing I love about a system like this though is I didn’t have to program a single midi note or progression. I can just turn it on and dial something in while experimenting with various clocking methods, logic, and arps. It’s also a very plyable system as you will see. Sure, I’m not going to get a DAW based level of composition but I’m not really interested in that these days. Mainly interested in having a system I can play.

The Basimilus can get way more agressive than I’m having it here but this first jam is a bit tame because I’m just getting my feet wet with the system. Next video I’ll do a Patch From Scratch with a much better viewing angle and a system walkthrough at the same time.

So apparently NI are finally releasing a standlaone Maschine called wait for it… “Mascine+” but for some reason it has no CV out and only one pair of audio outs… Its like they want to compete with AKAI MPC/Force but don’t really get the standalone market?

It's a standalone Maschine! At last! Native Instruments' Maschine + does so muhc out ofthe box without (and with if you choose) a computer. Here's the basics on

At that price point they can do better…
Will stick to the Force, I’m super happy with the current beta and the direction it has finally taken…

I’m interested big time.
I’ve been thinking of getting a mk3 for a while since I already have komplete and an old mk2 komplete kontrol. And the “lack” of output isn’t a big issue for me since I don’t have much in’s and outs left on my interface.
As a matter of fact, I might not even be interested… I have a laptop that’s already portable.
Might just get a mk3 after all.
Close rant.
Edit, kidding aside I am not sure I see a benefit to a standalone maschine since the draw of maschine for me is all the software that ni make.

Whats new with Force? Are they adding the drum synths soon?

Fuck this thread.
I just sent a pm to one of you and ended up buying their Model: Cycles.
Unsubscribing.