What interface is it? Most I’ve seen have the option for a dedicated power connector, in which case it’d be designed to accept mains power or USB.

This one. Focusrite Saffire 6 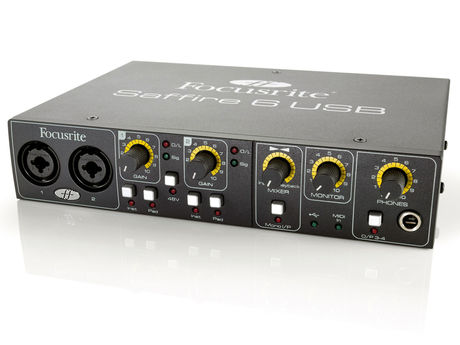 I don’t see an external power connector on that, just USB, so I don’t think there’s a way to power it independently. You could attach a USB cable to an external adapter (the kind you’d use to charge a phone over USB, like this) if you wanted it to carry MIDI or something, but you’d have no way to control the unit itself. It doesn’t seem set up to attach it to anything but your computer, but it’s class-compliant, so it should carry power over the USB from the PC.

That was just what I was about to do, I just wasn’t sure if it’s a thing people do

That was just what I was about to do, I just wasn’t sure if it’s a thing people do

I have a extension lead that has 2 built in usb outs which I use to power my Korg SQ1, but a usb adapter will do the job.

Careful of power bricks with USB sockets unless they have power smoothing etc. They can cause problems because they don’t provide proper steady output. Apple devices are susceptible which is where I found out about this but the principle applies to anything.

I have been having a bit of fun with my moogeses64.however syncing seems to be dodgy.
However it could also be me.i did follow the instructions.and they do not really sync(moog-moog)
is anyone familiar enough to throw some advice my way?i followed the pdf carefully.and i did install the 2.o update.it sounds fantastic,and i have learned some cool new tricks.but …maybe i am trying to hard.
i cant seem to find relevant videos.i mean there are some but not very helpful to me.
anyway still plugging and i will share something soon!
cheers

The Matrix 6 got back home today. There was a ticker-tape parade and everything. Now to hope it doesn’t die again in three days

Hey guys, so anyone using the Squarp Pyramid at the moment? I am curious as to what you all think about it. I have a budding OOTB setup and am interested in it as a central management of all my patches and ideas for my various synths. F.E. it would be great to send program changes to my other equipment from it to handle song changes quickly. Currently I have to go into each synth and manually change the patches to match each other for composing an idea and this in particular sort of kills the momentum for me. Any experience you can share would be much appreciated. Any good midi based alternatives for song-based HW patch management and composition besides the Digitakt (or other, more expensive Elektron gear…not really interested for various reasons)?

yeah, I have had my eye on an MPC 1000 for years , and now the One is out…I dunno. seems pretty cool, just not sure it would have as much generative capability aside from banging pads for cool rhythms. I should check it out more I suppose. Similar price and all…

Yeah, I think the squarp has more midi effects type stuff. Don’t know, don’t have one, but the MPCs definitely are all bout playing the pads.

One great thing about the current Mpc range is the Step sequencer, not the note grid.
In there you can edit automations per step, similar to the Elektron p-lock but not as intuitive.
You select the parameter from a drop down, draw the value with your finger (or turn a knob but a finger is faster).
On the other hand, based on my experience with the Force, I do not recommend supporting Akai buying a new product. Wait and get second hand.

I also think the force is behind software-wise right now. Supposedly, they were supposed to merge force and MPC, but I’ve seen one beta software update for the force so far since I bought it in February. They did a really good midi update for the MPC range though.

If the force ever gets that Midi capability and it’s arranger, then it’ll be an awesome sequencer with some software instruments and effects to back it up. If.

Have you looked at the Launchpad Pro mk3? It does only have four tracks of 32 steps each, but you get mutations per step, independent track lengths, a chance parameter per step, plus all the note/scale and chord modes, 8 custom modes which could give you Program changes at the press of a button, etc. I don’t know if it’s too limited for your needs but they’re $350 new (I don’t know the used market for them). I have an X that I use with Bitwig and sometimes my MPC Live via USB ports/Custom Modes, and have been thinking about upgrading to a Pro mk3 for the extras. But I don’t have a large amount of outboard stuff I’d need to sequence, and I don’t know how many synths you’re looking to work with.

That said I do own a Pyramid and have used it on generative songs ITB. I didn’t mess with program changes so I can’t speak to that side of it other than saying they aren’t hard to set up. But as a generative brain/hub it has a lot of potential. I haven’t used it for a while, but funnily enough just yesterday I got it out again to play with it once more since I was interested in the Torso T-1 currently on Kickstarter.

Mine is the OG version, but it’s pretty minor changes to the hardware between the revisions. Iirc mk2 got a slightly better trackpad, I don’t know about mk3 at all. My biggest gripe, if you can call it that, is that it ships with a hard-wired AC adapter instead of an adapter you plug a USB mini cable into. Not a huge deal getting a data-only cable, obviously, and it can be bus-powered.

It’s a good and powerful hardware sequencer if you need it, though, and does have some performance capabilities if you want to roll that way, too.

thanks for the FB so far guys. I have a Launchpad (not pro) and just do not get on with it in Bitwig. I mean, on the other hand I freaking love my new Monostation, but the LP seems like a memorization nightmare for all the params…i want some lables, and some knobs. I don’t have the scratch for the Pyramid atm but, and I don’t want to jinx it, I have an interview tomorrow for a job that if I get it, would increase my synth budget exponentially, so I am still dreaming about owning one this year. We shall see.

Oh, when I say Launchpad X in Bitwig I mean with the Driven by Moss extension that completely changes it and does its best to make it work like a Push. A completely different experience than the default Bitwig one. Forgot that little detail…

I use that as well, my LP just does wierd things now with it, I am not sure if it is me of BW…I will unpack it later when I have more time, like maybe winter.

My birthday is coming up this month and as far as I’m aware the wife has got me a Behringer PX3000 patch bay.
So i’m looking around at all my gear and thinking this is going to take some careful thought and planning, its already clear to me that 1 PX3000 aint going to be enough and i’m going to have to order a massive amount of new cables.

I recently signed up to Distrokid and I’ve decided i’m going to start releasing tracks, so I’ve been looking at mastering hardware to run my final mixes through, mostly the SSL Fusion and Tegeler creme, and yes these hardware devices do make a micro difference but i’m starting to get sensible and think £1750 difference? i don’t think so, so thats a hot and cold area at the moment.
If the creme EQ would cut then id of bought it already.

Moog Subharmonicon is tempting me, however in my mind i look at it and see a £500 synth which is roughly what i payed for the mother-32, but shops/Moog want £739, so thats another principle thing leaving me hot/cold.

Got my eye on a ACL Sin­fonion, i think theres a good chance ill end up with one of these, i’m waiting for Juno to get them back in stock because i can phone juno and haggle a much better price.

and i also want a new camera, one that is good in low light that does wide screen for studio videos, looking for the perfect camera is another massive universe with masses of plus and negatives where the percent camera doesn’t exist (yet)…I was looking at the Black Magic cinema 4k but thats another rabbit hole i shouldn’t really be opening.

i can only have one of the all above mentioned

oh and I’ve been using Ableton live which is fine but i’m really missing logic, i jumped ship to Ableton because LogicX is no longer supported on my 2008 3.1 Mac Pro.

So I’ve been looking at secondhand 12 core 5.1 Mac Pros on eBay (the last cheese grater before the horrible dustbin) to get me back in Logic land where I’m far more comfortable, but £1400/£1700 for a secondhand 11 year old machine is scary territory.

thinking i could simply switch over the hardrives in my current Mac pro and away i go.

and again has to go in my “can only have one of them” list.