@canecreek do you happen to know if the Polyend Tracker converts files to mono as it imports from the SD card? Or do you need to preconvert to mono with swith or whatever?

Oh man. I saw that and thought it would be damn cool to pick up that and an 0-coast. But then I realized I’d want to quantize the pitch, so I’d pick up a disting. Then I’d need a case for the disting, and I’d probably want to fill that case with some of the other cool modules I’ve wanted for years. Then I’d be broke. So, cool as it is, I’m gonna pass on this one.

Oh sorry guys, I wasn’t trying to sell it to you. More of just like, “hey look”

Fair enough, just someting my brain popped up when looking at reviews.

I’ve been dodging that bullet for years. Owned a couple of simple setups, build a couple of modules, but always managed to get out from under it before it took over my rooms and wallet.

These days, I scratch that itch by mapping a shit ton of stuff in Reaktor and VCV to the relatively cheap BCR2000 to get my knob twisting in. Not as cool as the real thing, but it prevents my wife from leaving me because I’ve dedicated yet another room to a hobby.

Does anyone here run a OG circuit?
I know a few peeps have the mono synth one, but the first one?
I might pull the plug on a decent deal on a second hand one to compliment my MPC.
will the 2 be a good pair? How is the digital synth? And how would it be as a “keyboard” for the mpc?
I think this, the MPC and guitar would be a cool setup, hopefully.
Thx.

That’s 90% of this thread, you’re doing it right. I’m the one who has to get another credit card so I can add another case to my rack.

The thing that I have to remind myself of constantly is that I love to save patches. I love saving patches. Saving patches is good. Modular and semi-modular can’t save patches. Except the Matrixbrute. Which is why I have that one (and chose it over putting a deposit on the Matriarch with last year’s June funny munny). Not a patch cable in my studio though. No sir. I like to save MY patches. My patches are all saved multiple places.

Yep. All my patches are saved with nary a patch sheet in sight. No scribbled dream journals of patch notes from 1AM 3 years ago that I need to decipher, my patches are SAVED. Digitally. Perfectly recreated at my whimsy. Who needs the mess that would come from being unable to do that?

I just got the mono, do not have the original circuit, but check out Ricky Martinez on YT, he uses both MPCs and Circuit quite a bit if you go back in his posts…he may have a vid using both together.

How is playing the pads in scales on the mono? I assume the original would be similar.

I’m happy I’ve got my metal ivy under control

once your Euro-crack get to a hefty size, you’ve gotta start looking for space to store cables 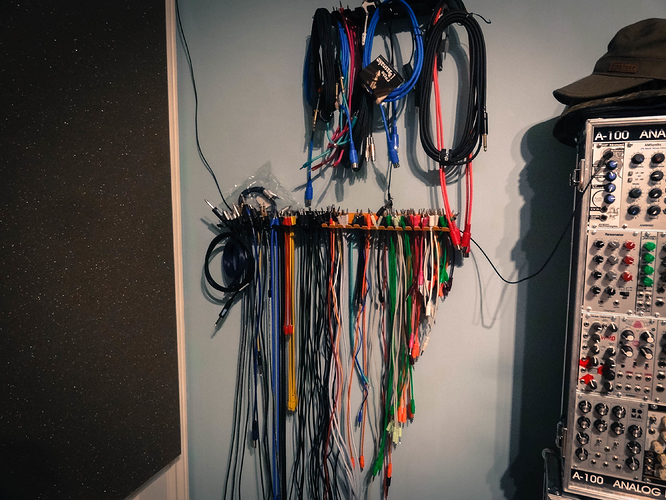 Last time i seen him he was pratting about with a little eurorack live techno case, i thought that novelty won’t last him long

oh no it was that zen delay too, he claimed it was the best thing since sliced bread, so good I’ve never seen him with it since

Oh well, I went for it and ordered the circuit.
I just hope I can play the scales on it as a mini push type thing to complement my MPC, and add some one shot samples with the new firmware.
It might be a pretty decent pair, only downside is now I am going to have to figure out how to reconnect the stuff! First world problems.

Does anyone here run a OG circuit?
I know a few peeps have the mono synth one, but the first one?
I might pull the plug on a decent deal on a second hand one to compliment my MPC.
will the 2 be a good pair? How is the digital synth? And how would it be as a “keyboard” for the mpc?
I think this, the MPC and guitar would be a cool setup, hopefully.
Thx.

If I’m not mistaken the synth voices are from the Ultra/Mini Nova. I liked the Ultra Nova a lot. Like, I’d consider buying one again.

I’ve not actually used a Circuit though. I was interested in it but there was something about the way the workflow of the synth voices worked I didn’t like on paper. Personally, I don’t like step sequencers as keyboards because it is hard for me to visualize it as a piano keyboard which is how i know the little theory I know.

i was a bit shortsighted ordering the two moog mother 32s,but i figured it out.
had to rerout a couple cables,and lack of power was easily solved.
but i do have to wait for some longer patch cables.
the idea being syncing my korg minilogue with the moogs.
which can be done.the korg has cv in and out as well as sync in and out.
i may be a little nutty.but this is exactly what i had in mind!
there is a method to my madness.despite my insanity.
more to come soon.cheers biatches!

I have not figured everything out yet, it has been a busy week.

I was able to change scales but something was not quite right with recording those notes into the sequencer. I will have more time tonight to break open the manual. FWIW it is a fantastic beast so far, lots of great sounds in there.