also the pandemic is over, when’re we gonna get another season of Black Mirror?

The pandemic IS an episode of Black Mirror

I just started watching The Sopranos.

Yeah. It’s been like 22 years so now’s a great time to watch it.

Watched first ep of Solos. Its turd. Will watch other eps since its an anthology and it might be better.

Watched first 2 eps of Intergalactic. Its awful. I found myself wondering why there is swearing on this children’s show

Neither Star Trek nor Stargate may have had the best of writing, but despite that fact, those shows will always have a fond and favourable standing in my heart!

Can’t wait for this:

update: I finished Breaking Bad a while ago and I have to say that damn, the hype was actually real.

I’m a pretty big series snob and I consider BB to be by far the best series I’ve ever seen.

Finished it. It was such a great idea and execution.

Fringe – such a good sci-fi. I think it is in my all time favourite shows. Mad scientist, drugs, crazy science, deep story; it’s a must watch for any lover of sci-fi

Loved it at first but they kind of lost me after season 3 or so - I watched that years ago so I don’t really remember it… just that it became convoluted and it seemed they had lost the plot a bit. I didn’t finish it.

Fantastic show. So say we all!

Star Trek – sometimes cheesier than Stargate, but so too do I still love it (TNG, DS9, Voyager too)

Watched the original series decades ago, and the movies as well. I loved those when I was a kid. Spock’s death was heartbreaking… and the one when they go back in time to earth was just great. Haven’t watched any of the follow-up series though.

Black Mirror – absolutely loved how deep and shocking it was

Pretty uneven. Some great episodes and others… meh.

Funny how tastes can be. I thought it was terrible, full of clichés and that the main actor was even worse than Schwarzenegger. Lasted 2 episodes. Wifey hated it too.

If you haven’t watched them, do watch all seasons of The Expanse. It’s the best sci-fi show since Battlestar Galactica.

Just finished Black Summer season 2. Should have re-watched season 1 before that because I didn’t really remember the characters… Still tons of fun anyway. And quite brutal at times!

update: I finished Breaking Bad a while ago and I have to say that damn, the hype was actually real.

I’m a pretty big series snob and I consider BB to be by far the best series I’ve ever seen.

We’ve started up Dominion. I had no idea they made a sequel series to that Legion movie all this time. It’s a little cheesy but that’s just SyFy for you. 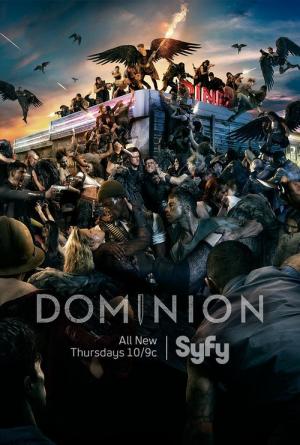 Legion was very cheesy too. Didn’t know it had come to a TV series. I’ll nosey. Cheers for the heads-up

Finished it. It was such a great idea and execution.

Agreed. Such a shame that it got cut short.

Ah, see, I loved how deep the story was. Not sure how far you got, but pretty much all of the loose ends get sewn together in the final season in the most spectacularly unexpected way.

Fantastic show. So say we all!

So say we all!

Haven’t watched any of the follow-up series though.

They’re not great writing, really – perhaps its the cheap use of drama and “shields down to 80%” to build tension, rather than subverting it and building it up in other ways – and much of the acting is abysmal except some of the main characters.

But, I loved them as a kid, and the atmosphere was always a calming one that helped me in down times – same with Stargate. 'tis why I love them so much despite their shortcomings.

I also just love sci-fi, and pretty much anything with spaceships, alien civilisations and cool technology in.

Funny how tastes can be. I thought it was terrible, full of clichés and that the main actor was even worse than Schwarzenegger. Lasted 2 episodes. Wifey hated it too.

Perhaps, but then again all of story writing is the recycling of human cliches.

I think at some point we tend to define the objective quality of things based on our personal tastes.

Re: Altered Carbon - From what I saw, it was nicely made. No doubt about the production values. The problem with clichés is that more often than not it’s writing laziness more than anything else. When you see something coming from a mile away and yes, it happens, you wonder “Really?”.

That said, people react differently to different things, for sure.

Nobody can define the objective quality of things… because everyone’s opinion is subjective in itself. So the idea is to remove feelings/emotions as much as possible and see the value in the work, even if it doesn’t speak to you

Perhaps it is a good indicator, generally speaking. However, there was nothing in Altered Carbon that seems lazy.

If you’ve only watched two episodes, as you say, then that in itself is a cliché and a frankly a lazy assessment of the quality.

Nobody can define the objective quality of things… because everyone’s opinion is subjective in itself.

That I agree with – you’ll get no argument from me there.

However, what I mean by my comment is not to question the limits of objective truth, but rather to point out that, even when we think we are being objective, and subtracting emotion from the picture, most of the time we actually aren’t doing it as much as we think we are.

That would be because only 0.4% of information that counts into a decision by the brain is actually conscious, hence, we are not aware of 99.6% of the information that forms a particular intuition.

And, generally, given the ratings for the show are actually generally very good, and only about 5% behind the ratings of Battlestar Galactica, I’d say that would be a good indicator that Altered Carbon is not as full of cliches as perhaps you might think it is, from the first two episodes.

I read the Altered Carbon books years ago. Proper pot boilers but here and there some great sci-fi ideas. First book was great then after that a bit so-so. So I wasn’t surprised how both seasons of AC went. I was a bit surprised how good Poe was in the first season.

Its fun, well done and definitely better than most offerings even if not quite classic.

If you’ve only watched two episodes, as you say, then that in itself is a cliché and a frankly a lazy assessment of the quality.

It’s not laziness - it’s a question of scarce available time & how you spend it. Unfortunately, with the job I have and being married, I don’t have that much time for myself that I can and/or want to spend watching TV… That’s why I won’t spend more than 2-3 episodes on a show and if it doesn’t speak to me, I just drop it.

In 2021 we do have a “first world problem” in that a couple subscriptions bring you tons of hours of entertainment. I remember the time long ago before the internet when I would listen to the same album over a hundred times or reading the same book twice, rewatch movies 10+ times on VHS or DVD, play and replay a video game all night even if I didn’t think it was all that great but I was broke and paid for it so I had to… etc. etc.

Nowadays there’s just so much content available everywhere vs so little of my time available that I’m nowhere near as ready or simply capable to give something a chance as I was before.

And, generally, given the ratings for the show are actually generally very good, and only about 5% behind the ratings of Battlestar Galactica, I’d say that would be a good indicator that Altered Carbon is not as full of cliches as perhaps you might think it is, from the first two episodes.

Sorry if I did go hard on AC. Mostly, I remember being disappointed that it had evident amazing production values but the writing wasn’t all that. Ultimately, I’m glad you & many people had a good time with it and who knows, maybe one day I’ll give it a second chance then!

Lazy was a poor choice of word! I was trying to use your own language against you.

Though, that did come out sounding very rude.

All I mean is that looking at the total ratings, generally people feel AC is a good show that doesn’t embody lazy values, and so perhaps not liking it is attributed more to a stylistic preference than an objective quality of it.

The brain point is about how, when we analyse what we really feel through careful reverse engineering of the self, we tend to find logical fallacies deep within, because naturally we don’t resolve our views to that high a resolution unless there is a necessity to do so.

Sorry if I did go hard on AC.

Haha, I’m not that upset about AC, really.

I get funny when I perceive something being unfairly judged.

I think on some level I still get a bit reactive because of my time as a kid being bullied and mischaracterised!

I tried watching Resident Evil: Infinite Darkness a few days ago. Terrible. Japanese writers making scripts depicting Americans are usually a bit weird and stilted, and also derivative of cheesier American action movies and this is no different. It has the oddest story beats and some of the plot points make little sense even for a zombie show. The CGI of the world looks great but the characters look odd and are animated very cartoonishly. It’s only 4 episodes so you wont lose much time watching it but it doesn’t expand on or add to the RE story much in any way.