Started Lawrence of Arabia today. These desert shots are something else, wish I was watching it on a bigger screen. Started to knock me out an hour in, so I’ll call it here for tonight and pick it back up tomorrow (I hope).

lawrence of arabia is an epic movie i tried watching it, it was very long but it was very good.

Yeah, I finished it last night. Very good indeed. Well worth the watch. I’m sure some of it went over my head, but what I understood, I enjoyed very much. And it managed to make me think in a way that most movies do not (about humanity and how they act in war and such). And there was even subtle symbolism - you just don’t get that in movies anymore (not the mainstream ones I see the ads for anyways).

Also the film OG with Jeffrey Wright was sorta interesting

Rise of Skywalker. As usual, no spoilers.

Eep. 35 minutes of adverts before the film actually started, most of it for Disney shit. Holy fuck, way to kill a cinema experience. Cinema is already dying and shit like this is speeding it on its way.

Taken on its own, way too long. Taken as a bunch of people desperately trying to un-fuck the disaster that was The Last Jedi, its amazing its even this good. There’s some bad things, some good things and some great things. Much of the dialogue is less than great but hats off to the writers for threading their way through the mess that Ruin Johnson made and inventing reasons for some of the sheer stupidity he left them to deal with.

The film itself could have pretty much started at the planet Jumanji or Kijimi or whatever it was called. Sooooo much preamble before then (some due to what I wrote above). A lot of the quips fall flat because everything that is happening around them is so deadly dull, but once the film gets past the Shadow of Johnson, it moves along at a great pace.

A couple of very noticable things: In TLJ, The First Order were turned into the comedy relief bad guys and thats a great way to destroy any tension at all. Here, they might not be amazing but they’re at least a threat again. Its nicely highlighted by Domhnal Gleeson as Hux. I like him, I think he’s a pretty good actor. In TLJ his role was turd. Here he was great but sadly relegated to a very small role. Similarly, Richard E Grant gave a masterclass ham bad guy performance. Absolutely wonderful to watch and explains where most of the scenery budget went because he must have chewed through most of it.

One of the problems a many have complained about - lots of new characters, not a lot done with them. Yep, can confirm that. Can’t shake the suspicion the House of Mouse wanted them in there for options in spinoffs.

Unexpectedly, Kylo Ren was very good in this. Adam Driver has gone from playing him as whiny/emo bad guy to something more and the whole thing benefited from it. Don’t get me wrong, not a classic bad guy but good enough.

Very little Rose Tico. Thank fuck. The actress that plays her may be ok but fuck that pain-in-the-arse twat character. A few lines, then get to the back of the crowd. Some have whined about this. Its a good thing she didn’t have much to do here.

Rey’s story was good enough that they could have cut out everything else, focused on this and still got where they were going. It would have been a more streamlined and satisfying experience. The climax with the Sith was great.

And to finish off… too much coda. Dear fluffy lord even for me there was too much of this.

There’s some good nerd service in here. Ghost shows up (at least 3 times from what I could see), and there’s other stuff in the background along the way too. Its always lovely to see B-Wings join a battle, amongst others. Some of the nerdiness would be spoiler-ish, so… nope.

I’ve never heard such blasphemy in my entire life !

At least it wasn’t a remake and added to the story/universe. I ended up buying more so because I liked the original so much and had to watch it. Worth watching but nothing like the original, definitely.

I’m biased though because I love fan service and dark sci-fi disaster flicks.

2019 Hellboy. Liked the first two movies and didn’t expect it to suck that bad even with all the negative reviews… I was like “yeah, it’s Hellboy, can’t be that bad”, but it was really just completely horrible, maybe apart from a handfull of scenes that were okish if you don’t expect too much. Mostly disappointing garbage in terms of directing, predictable and boring story and dialogues, effects just so-so… and over and over and over again an excessive amount of people just being ripped apart. I never read the comics, so maybe those were just like that and this movie was closer to the comics than the first two? No idea, really. For me, it was just disappointing since I liked the first two movies (although I noticed I’m even doubting that now a bit after that complete trainwreck lol). Not even my wife liked it that much and I have to watch all kinds of zombie movies with her, she fell asleep during one of those “action” scenes ffs…

I watched 20 min of Hellboy.

Yeah, that really was the smarter decision. I somehow had the thought it might get better and then I kinda wanted to see just how bad it can get…

The best thing in Hellboy (2019) is the coda after the main stuff is all finished. If they’d made the rest of the film like that it would have been great. But they didn’t. Oh well. 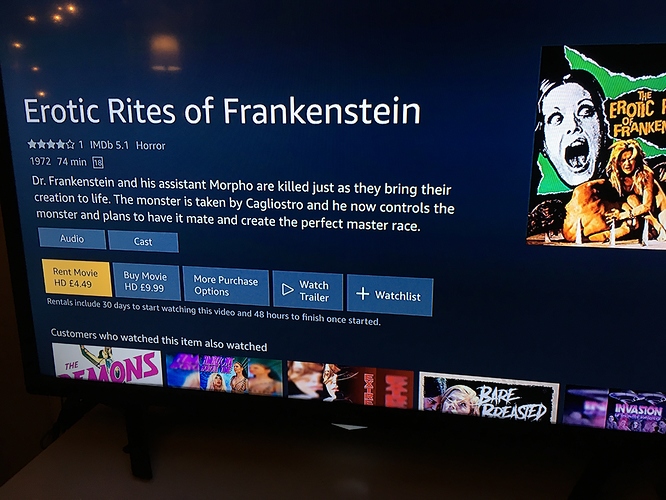 The movie is fucking shit, and a disgrace to black metal.

have you seen that movie Mandy with nicolas cage? That was legit metal

One of my top 5 movies of all time!

Can’t wait to see what Panos does next. Beyond the black rainbow is also one of my favs

Yeah the scene in sibiria was not that bad!

I just watched “Parasite” By Bong Joon Ho, it was very, very good. 9/10 for me personally. I think he’s probably the best director I’ve discovered in a very long time. He’s among the best directors making movies right now.

Really its a worth watch or not?