In fairness I don’t have anything below 120 other than the bassline and bass drum usually and even then the side chain takes care of competition. Very occasionally I’ll have a part that plays up and down the frequency range but while a bastard to EQ and needs automation, doesn’t happen too often.

I think there’s a ‘noob trap’ of sounding good during the design/solo playing phase and what happens in the mix. Lets face it, it’s shitty and boring to play a big synth pad with no lows by itself, and most presets revolve around sounding good on their own, not sitting in a mix. It takes some experience to know that you’re not doing yourself any favors down the road by leaving all that clutter in.

There’s also the fact that a synth isn’t really a limited instrument in timbre and range the way an acoustic one is - like a double bass isn’t going to generate a bunch of 10k+ no matter what you do to it because of it’s physical properties, and most people have an intuitive idea of where that double bass lives in the frequency spectrum. Synths aren’t limited like that, so you end up with these crazy full-spectrum patches just because you can.

It’s similar to inexperienced metal guitarists dialing in a fuckton of distortion with scooped mids because it sounds bitchin’ in the bedroom and then stepping all over all the other instruments because they don’t understand that guitar is a mid-range instrument. There’s a disconnect between solo and mix for a lot of people.

Lets face it, it’s shitty and boring to play a big synth pad with no lows by itself, and most presets revolve around sounding good on their own, not sitting in a mix.

That is why my Microfreak is the synth that stayed with me the longest, being limited it means it sits in mixed quite well, without too much of an effort

Replying to myself because I’m cool.

Said that, the only thing on my desk at the moment is the Mpc, I’m trying to see how far I can go with 1 box only.

Edit: turns out I can do a decent job on on box only and maybe one of my most decent recent songs, I don’t even have too many mix complaints.

That FMish low end is amazing man. In my headphones it has a nice stereo-ish top end but doesn’t muddy the mix at all. I like that there is some top end click to the kick drum, I’m not sure I love how it “chirps” though (that is a pretty minor critique).

I really love that besides the drums everything else is just this one giant evolving texture. The extra sub that comes in later is a great touch…dat bassweight bruv ;p I seriously need to listen to this on my PA.

:edit: I tend to use my hardware effects for tracking through and then rely on plugs for mix effects so that they can be automated and easily recalled.

yea, ITB I pretty much only use Vintage Verb, his presets are really great starting places for tweaking as well, which I like, he has a lot of utilitarian ones instead of just wild and crazy things no one can actually use.

I love Valhalladelay, I’ve never even used a preset, I simply use it to make my vsts sound vintage analog by simply opening an instance and tweaking the age, colour, feedback and mix until I hit that sweet spot of vintage nuances.

Seems plug-ins have cropped up korneffaudio.com have released a great reverb that models those old cheap 80s alesis type boxes.

It’s on offer at the moment for $19, we’ll worth a try before it goes full price on the 3rd of October.

So just realized if ya get this
http://www.dynamictonality.com/relayer.htm
http://www.tobias-erichsen.de/software/loopmidi.html
and this

Ya got a poor man’s axis 49
I just ordered that, I’m stoked 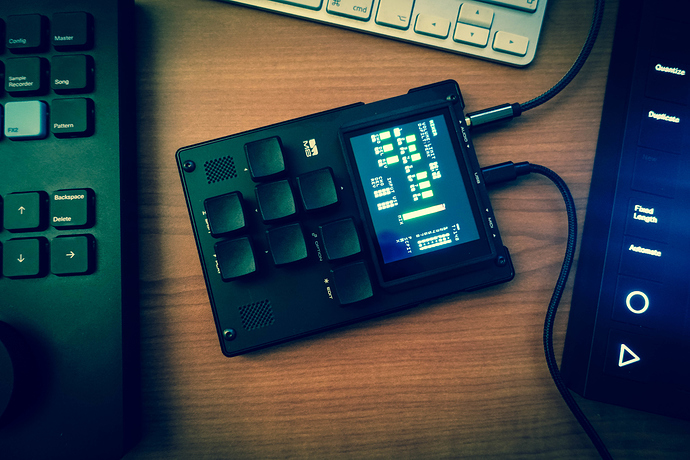 I’ve seen this and find it both cute and interesting.

I have no idea how Denon, Vestax et. al. digital, computerless DJ equipment works with time stretch/pitch/sync…but I have to hand it to Pioneer. People complain about how they rule the DJ/club industry but their shit works and its tight (in the literal sense, though it is also tight in the metaphor/slang sense). Besides I really don’t see having an “industry standard” as a bad thing. Again, some people don’t like it, but I love the idea that I can walk into 90% of clubs or events with a USB stick in my pocket and play a DJ set.

Just got my new mixer, CDJs and and Toraiz SP-16 hooked up and they talk to each other over a $29 passive ethernet switch. And I think it goes w/o saying that the Allen and Heath mixer sounds amazing.

Their next trick to finally impress me and have me doing a Wayne’s World “we’re not worthy” bow will be if I can use MIDI out from the SP-16 to sync my other gear to the DJ setup.

Pictures forth coming when I clean up some packaging and tidy up the cable spaghetti.

The SP-16 takes the BPM from the CDJs over DJ Link and turns that into MIDI and will send it to external gear. You can also send start stop from the SP-16 while using DJ Link. So, if the SP-16 is synced up and starts the sequence on other gear, just need to mute the other gear and its ready to go once you need it. I’ve currently just go the 808 clone hooked up and it outputs to the fourth/last channel on the DJ mixer so I can cue it in my headphones, EQ etc.

edit 2: I’m fucking giddy. Having a blast just messing around with the new setup. I’ll record some improve noodling soon. Some live recorded tracks do drift a bit which is to be expected, I just have to get back into the groove of using tempo nudge/riding the pitch fader/using other tricks to stay in sync–though I suspect my primary audience for the outcome won’t mind a tad of drift here and there. Modern on the dot DAW stuff is so easy to play with it feels like cheating. I’ve also got the Aux Send of the DJ mixer going to the sampling inputs of the SP-16 for even more live looping fun and games.

Also, I’ve got two USB sticks with the same playlists, one for each CDJ–this is essentially like having two copies of the same record on two turntables. Should have done that forever ago…

edit 3: this is the setup I’ve been waiting to get lost in and release self indulgent long ass dubby disco/house/acid/breaks/jungle improv live remixing mixes no one wants to listen to. Yea, that’s a bunch of stoner DJ ass crap I just said. Big up!

I’ve seen this and find it both cute and interesting.

I have absolutely no need for this but the MMT8 is so iconic it would be fun to try this (or an original).

I’m almost ashamed by how adult I’m being about gear. I’m actually happy and super productive with only one box on my desk.
Even though I’m eyeing a 2nd hand Virus TI or Argon8M as I’m really really into wavetable basses…

Yeah I seen it on a superbooth video and got all sentimental about the calculator design.