I promised you guys some Super 6 sounds. These are all mine. First time I’ve tried recording a synth in like a year. And you know what, it wasn’t half bad. Made a recording template while I was doing this so hopefully I start to actually use my synths in my music more. We’ll see, I have to get midi figured out (and this thing doesn’t have USB midi yet).

Polyend tracker is worth a mention it samples, i like it more than my Elektrons (Takt/Tone/A4/Cycles)

So, since @moodorf’s question about older gear, and thinking again about the missed opportunity I had to buy a MS2000r back in high school, I’ve since become determined to track down a unit.

Now, there are units out there, but I’m not looking to just get one to get one. I only want to get one if I can get a good price on one, and I’m thinking I may be able to find one under $300, cuz there have been others sold around that price. I may even be willing to go up to mayybe $400, but much more preferably less than that.

So, as I was scoping around different sites on the internet to track down what’s out there, I came across a guy selling one for $250 (who’s willing to let it go for $200 if you also buy the Slim Phatty he also has, but I’m not looking to buy two synths). The only catch is he says it’s “janky”, and thinks it has a grounding issue. He says it cuts out at times, until you hit it, then it comes back on. I’m thinking I’m relatively comfortable enough with opening things up and checking out electronics to at least entertain the idea of fixing it, but I am kinda hoping to talk him down closer to $200 for it.

Otherwise, he says it works fine. I don’t know how often it cuts out or whatever, but I’m wondering what kind of issue I might be looking at. I imagine it could just be a short somewhere, but I would like the unit ultimately to be working, and I’m probably gonna avoid having it repaired because then I’d be back up to paying $400 or whatever, which there ARE ms2000r’s out there for that price.

It’s more than likely a loose solder joint somewhere. Electronic components themselves don’t generally respond to whacks unless you beat them with a hammer, so something is coming apart and back together and it’s probably not on the PCB itself. Probably vibration from actually playing it is enough to do it. Could even be the jack itself.

There’s a slight chance that a SMD component has a bad connection, but those are almost never loose because of how they’re attached. If it is an SMD part, it’s a huge pain in the ass to track down and fix.

If you have a soldering iron and a spare cable to make an audio probe, this is likely a great deal and a piece of cake. Might be a bit time consuming, but I’m seeing MS2000rs all over Reverb for like $450-500, so if you could snag it and fix it for $200 I’d say it’s a hell of a deal.

I just had a bit of a funny night last night while making music, I’m lucky to have a few bits of nice / expensive hardware but it all started with a Volca Sample (I went OTB some years back after my laptop was stolen when I got burgled)

I installed Pajens’ Firmware onto the Volca Sample a while back and yesterday I was experimenting with sending CCs to it in novel ways from Architect and some of the techniques I discovered using the new CCs added in that firmware were a proper AHA! moment in regards to music making in general and serves as a reminder to myself that even the cheapest / simplest bit of gear can lead to groundbreaking results if you truly learn it in and out and get creative with its’ particular set of features.

So yeah, I really recommend grabbing one of the V1 VS’s mentioned above with the custom firmware, they’re actually ridiculously good.

Something she said really resonated with me, that she started electronic musicing because she liked synths.
Same here.

One does not exclude the other, we can still talk about hardware and techniques that go with it.

But mostly it’s about praising/dissing gear…

Yeah I meant nothing by it other than poking fun at myself of making a point of it when I joined and then only to go on and chat about as my first ‘contribution’ hah, I don’t mean to put anyone down which is what I realised my first post could’ve come across as. This place seems great and I have no complaints

As another contribution to this thread - Along with the Volca sample mentioned above being one of my favorite pieces of gear that’s heavily shaped my sound / methods, The Motas-6 has been another one, playing around with all the possibilities with all those LFO’s has lead to discovering a lot of interesting ways to create patterns within pads / textures / bass / whatever that can groove along to the rhythm of your track. I thought I’d mention as not many people even know it exists and if anyone’s in the market for a high end monosynth, I don’t think it gets much better than the above.

I can’t diss hardware at all as the circuitry of it all is a huge inspiration to me!

man if only i weren’t poverty stricken since i was born i could contribute to this thread. Oh well. nothing like spending all of your cash on basic essentials and trying to keep your gf from leaving you.

I know how it be, I had nothing at all when I left home and still had a nothing many years later after having to move suddenly several times and leave everything behind.

I’ve had a few years where I’ve pretty much not lived life outside of working and scrimping on spending everywhere I can, so very sick of that now though!

If you do ever get into hardware, I recommend keeping an eye out for good deals on 2nd hand stuff, I managed to slowly buy and flip things for better things over the years because anything I bought was always at a below average price.

Anyway… I hear people making amazing music with software, and you have a lot more possibilities with it, I’d be using it too but my £150 laptop can’t really handle anything other than running Architect (which even it can run flawlessly!)

Neutron arrived. It’s a lot of fun. Some initial impressions…

The Bad: Lots going on under the hood, and there’s a bunch of key combos that are in the manual that aren’t anywhere on the interface (there are apparently overlays you can get that list them). Apparently a lot of it is configurable/editable through the app (see below).

There’s a hiss/hum thing I need to figure out that’s persistent even with the volume down. Analog bits may need calibration.

The USB class compliance is a fucking joke, apparently fairly common with Behringer hardware. This is what you get at bargain basement prices - the software side and little things suffer. Neither the firmware updater nor the Neutron app will recognize it because Windows loads the wrong driver for it. A bit of googling and some device manager massaging let me get it updated, still can’t get the app to work. I’ll figure it out eventually.

The Good: The thing sounds awesome - rich, textured, and deep. Can get some overwhelming bass going. Really solidly built and the knobs are the right size and have a good weight to them.

The Osc blend option is a lot of fun, so much interesting variety. The patch points are even more fun.

I haven’t played with any of the deeper features or MIDI (haven’t even hooked the Keystep up to it) because I can’t stop twiddling knobs. It’s easy to get lost in, and there’s always one more “I wonder what it sounds like if I do this…” thing to try.

Volca drum. STILL FUN! I modulated everything w max and it’s a chaos machine and also ran it through a rat pedal today and jammed on the internal capabilities. Sounded like MSTRKRFT

if i were going to go that route i would get another guitar. i had to leave mine the last time i moved because it wouldn’t fit in my car and i had to pack up everything i could fit into my car and leave half my shit on the side of the road. but honestly that was so discouraging i don’t even care about music all that much anymore. 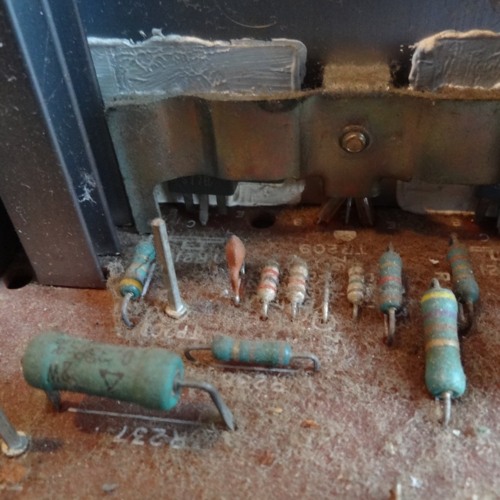 I can’t praise the Polyend Tracker enough, I’ve just spent most of the day sprawled over the settee making music, something I’ve never done with any of my elektron devices without having to resort to manuals every 5 minutes. At the moment it’s great how it is but excited to see what other features appear with polyends frequent updates.