I’ve been listening to a lot of Stooges, Ramones, and Misfits lately. Those early albums were fucking great and even though they were often recorded in a matter of days on low budget, they still hold up all these years later. By modern standards they don’t sound great, yet at the same time they somehow do. Why is this aesthetic not present in electronic music? It seems like there’s this expectation that most electronic genres be shiny and perfect and any artist that fails to produce such a product is looked at as if they aren’t a real musician. I know there’s been a lot of comments in various threads on here about how a lot of you don’t like how overproduced electronic music can be, but not a lot of talk about purposeful underproduction in an attempt to capture that aesthetic and put the spotlight on the energy and passion and raw emotion rather than the musicianship or production skill. Is it something that just doesn’t cross over to this area of music, something lost to time, or maybe the electronic musician has a different set of tools that don’t lend themselves to that vibe? Could an artist put out a record today with the quality of say, Misfits’ Static Age and if so would anyone appreciate it or would said artist be dismissed for sounding like shit? Or are there artists out there that do make something like this and I just haven’t heard them? The early eras of acts like Death Grips or SMP probably come closest to what I’m thinking but even with them there’s a level of studio sheen and artistic competence not present on early punk/proto-punk records. Also, there’s the possibility that I’m an idiot who doesn’t know what he’s talking about…so there is that.

Go listen to old Chicago house or Detroit techno…much of it is equally as lo fi. Its an overall aesthetic change with music based largely the availability of inexpensive but good sounding gear and the advent of software. Lo fi is literally now an aesthetic choice. In the 80s and 90s many bands and dance music producers could only afford a certain level of quality.

I think the tools themselves lead people naturally to better sounding music.

I think there’s a bit more to it than just that.
Its funny this popped up here as I’ve just read an article on CDM and there’s also a Rick Beato video that talk about this.
I will link them later when I can.
The CDM article was cool cuz the guy made a whole techno set with basically just the new elektron box. He then (and this was my favorite part) called out all the people on gearslutz that hoard gear and argue but never make anything.
His point was like the OP, that great stuff was made on the cheap in the past. 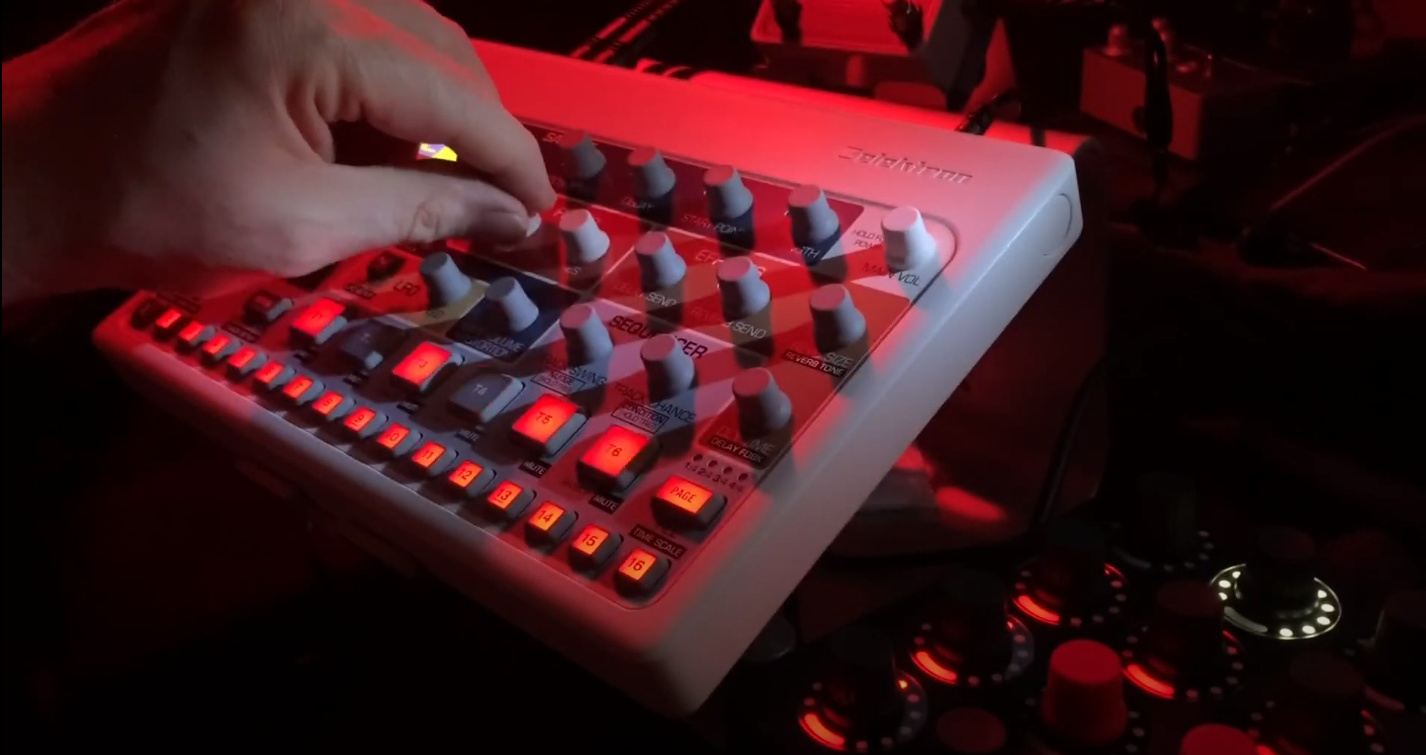 Adam Jay on building live techno sets on Elektron gear - and why you should stay...

The system has failed us, but not Adam Jay. He's here to show us how he rigs up his latest live techno sets. And he can make 3 tiny waveforms on a $300 Elektron make you want to dance.

Yeah, man. That’s my era. Cut my teeth on that stuff when it came out and it still sounds as great and nasty today. I’m a fan.

I think the reason music is so polished these days is “because we can”. And honestly, I’m not sure that some of those old Ramones albums wouldn’t have been recorded at a higher quality if they had the means. Of course, in retrospect, it’s part of what we love about them, but I know a lot of the punk albums from the 80s were done with what they had and where they could afford.

Part of the issue is you have to try to get that sound now. It’s not a natural byproduct of just having a 10 watt amp/pawn shop guitar/4-track/untreated basement. Even a marginal setup in the hands of a decent bedroom producer will be cleaner than pro studio tracks from that era. You either need to replicate those old setups (bad mics/placement, no sound dampening, iffy musical equipment) which can be a hassle, or you have to post-produce things to sound like that. It’s literally the opposite of what they were doing back then, which was plugging in and hitting record.

Also, electronic music never really had that era, because most everything was straight DI. You might get a little hiss and hum from the instruments and mixing board, and of course the analog stage of whatever you were recording into, but for the most part things were pretty clean unless they went out of their way to produce them dirty, like what Relic mentioned. So I don’t think there’s a widespread line drawn in people’s heads between electronic music and the dirty DIY punk aesthetic the same way there is in other music. It’s more of a “I’m going to do this thing AND this thing together and it’ll be cool” than something people come by naturally.

I don’t think I’m disagreeing with you or @SickGrayson.

Gearslutz can kind of be a cesspool in regards to arguing over minutia, gear hoarding and not making music. And I’ve got some great memories of some sweaty basement techno made on those first plastic Electribes. Like literally going to a “rave” in a flop house and the only gear was a shitty PA and like two dudes with a few Electribes (very specifically those) and they kept us going all night.

And yea, electronic music was never as dirty/grimy as punk because it was 99% DI recorded, but a lot of that stuff was really wonky. A lot of it was still recorded to 4 and 8 tracks off small Mackie mixers. In “Pump Up the Volume” I think it was maybe 808 State or The Orb were talking about getting their first big single out and the record label asked them for a DAT. They were so embarrassed that they didn’t have access to a DAT recorder they took their cassette to someone had a DAT made from the recording to give to the label.

Also, Trax Records from Chicago basically printed all the House music in the world for some years. The dude that owned Trax would run his machines until the parts could be fixed anymore. He bought unsold records from record stores, chopped up the vinyl, melted it down and repressed it. Their brand new records sometimes sounded like a record with 100+ plays on it.

Although I tend to agree with @Artificer that most people don’t draw a direct line between punk and electronic music (I think Moby is the best direct example of someone who went straight from punk to electronic, kinda also Genesis P. Orridge too) rave culture (putting on parties, recording the music, putting together sound systems) was very DIY and we will get it done with what we have.

Watch Better Living Through Circuitry or even Pump Up the Volume (the documentary about Chicago house, not the vapid movie by the same name).

Look into the Beat scene and people who work mostly with samples recorded to vinyl, that is were you will get a lot of lo fi electronic. Possibly also from 80s inspired folks who try to capture the sound of that early, now crappy sounding digital equipment.

I actually hate that kind of shiny perfect music. I can’t stand it. I grew up in east germany during the techno explosion that happened there…


People are still doing stuff like that… you just need to search for it and ignore the rest of that bullshit… when i listen to stuff like that right now i feel like i’m going to burst, there is so much energy locked inside of me. The first post crisis raves are going to be absolutely brutal.

Those are the kinds of parties I went to for a short time. Like 2-3 years at the end of high school beginning of Uni

I think Moby is the best direct example of someone who went straight from punk to electronic, kinda also Genesis P. Orridge too

This has already all been said, but I apparently had a half-finished reply sitting here.

I think that was the spirit of punk, so if you were looking for the electronic equivalent there’s plenty of noise out there

Also, I’ve seen a lot of talk on here about dirtying up one’s sound, and since the modern studio does tend to strip away a lot of the nasty stuff that made music so compelling in the past, it’s more essential than ever to try to saturate, overdrive and warm up signals that are otherwise extremely sterile.

Clark does a really good job of this IMO. I’ve always found that his stuff is super gritty, especially on Totems Flare

that old stuff is dirty because they had no choice. it wasnt a style preference, it was just the result of their tools.
these days people go out of their way to get that same sound with emulations and VA.
electronic music has almost no live input, so no noise and no reason to have any dirt. a lot of people try very hard to apply that dirt to their clean electronic music.

personally i love the crispy clean electronic sounds. VA and emulations are a waste of time for me unless i am going for that particular sound for a specific reason.
some people go for that sound in their style though, which is fine for them, but i dont like it myself unless a part is trying to get that point across.

I believe the spirit of ‘punk’ was captured in the Industrial music movement (and a some of its spin offs). My 2 cents.