The art becomes more about what you do and integrate and change the sounds as they move around each other. 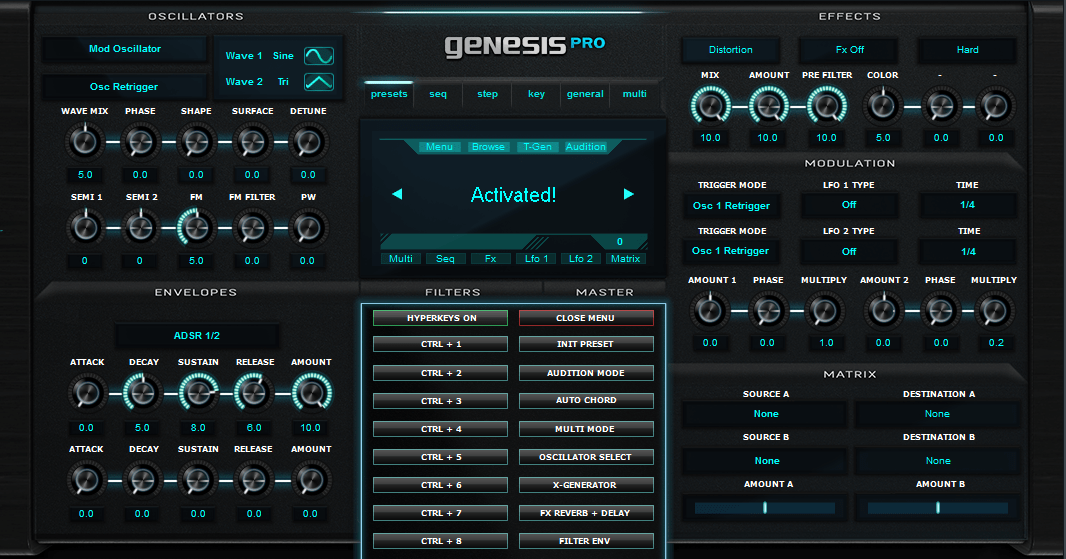 Ummet Ozcan has announced the forthcoming release of Genesis Pro, a powerful synthesizer VST plugin that will only cost one euro. February just became an exciting month to be an aspiring music producer – especially if you don’t have any money....

Has anyone seen this?

It was shared on our Discord the other day. Hadn’t seen it before. Chuckled at the masterstroke of the business model. It looks fun and for that price pretty much zero effort for anyone who wants it. So it will be on tracks in the charts soon and getting good promo.

I remain, as ever, sceptical until I play with it myself. The pitch for it is great though.

Hehe, yea. But for 1 euro an easy pill to swallow.

I’ll probably grab it simply because they adverted it like that, lol

Oh hell yes, me too

If anybody’s interested, I just got a 80% off coupon via email, which I believe is valid until end of February for anything at wusik dot com (sorry, still not allowed to post any link…)

Just let me now and I’ll send it to you.

same. Have the tab open on my phone browser so I don’t forget about it by the 12th.

PSP is having an anniversary sale with 24hr deals on their plugs. today Nexcellence is $20. Just bought it myself because one cannot have too many reverbs. fwiw the 2445 emt is also amazing, not sure if it will be put up for 20 though.

Eventide Physion is on sale, seems pretty neat-o, especially for some of you IDM types. Imagine just granulating the hell out of the transient of a kick…

Anyways, I’ve been thinking about picking this up and I prefer pluginboutique as my vendor of choice, so that’s the link you get. Also available direct from Eventide if for some reason you don’t like free stuff.

I know some people just like to nerd out on softsynths. I’m curious though how many you actually need in your stable. I’ve got Serum for sound design/digital/modern and RePro for vintage/simple. Do you all regularly NEED more than a few? I’ve not really heard many soft synths that sound all that vastly different.

I have more synths than I would need for sure, partly because older ones don’t get so much use anymore when something new does similar things better. Or does it the same way, but fasteror with a better UI ot whatever. But I use quite a few synths regularly, mostly for workflow reasons, synthesis options or for specific jobs. So from my current perspective, I def need:

But imho it’s mostly a question of wokflow, UI, and how fast you want to do specific things. With all the effects available nowadays you can just play all your synth lines with the same preset of one freeware synth and just mangle everything into its place without problems…

I’m not a sound designer so much. So my needs are more basic. I also tend to like to work with audio on the timeline of my DAW. What you say at the end of your message about mangling out side the synth is more what I do. I also didn’t account for all the kinds of synthesis. I only use subtractive and samplers.

It is kinda the same in the hardware world too, spoiled for choice these days. Needs and wants get blurred easily.

Yeah, I have a few that I have paid for, and a good set of free ones like arp or Minimoog emulators for kicks/learning how they worked. FullBucket stuff mostly. I have and can recommend the following:

others I own but could maybe live without: Hybrid3, VacuumPro, some pianos from other companies.

If someone is looking for a pay to play synth, I can highly recommend U-He. In fact, I’ve never not-liked anything I bought from them. A major part of my stable for synth and fx.

Absolutely agree. u-he is the bomb. I probably own 85% of all they’ve released. Still need to buy Bazille (but I have ACE, so no rush).

I don’t know what other synth I’d want from them since I have Serum for when the mood strikes me to get fancy with sound design inside a synth.

I really want their BBD Delay <3

And Diva is a no-brainer. Its sound is beautiful.

I think I remember a YouTube video where a guy had the original vintage synths and he played the same melodies on them and u-he’s Repro 1 and Repro-5. You couldn’t tell the difference. Amazing.

Yea RePro is amazing. I have it and use it constantly.

I think it really cant be overstated enough how good RePro sounds. I dont really care how close it is to the Prophets but it oozes vintage goodness w no effort.

iPad or phone fun - free for a limited time.