Should i break up with FL studio and get bitwig?

Or can I just use bitwig demo…indefinitely.

Fl studio I know how to use…

Is bit wig better than ableton…???

I’m too dumb to learn max4live.

They’re just tools. You’re asking if a roofing hammer is better than a ball peen hammer. It depends on what you’re doing with them, but they’re both still hammers…

Get a demo of Bitwig and see if you like it. The workflow is considerably different from FL Studio.

Is bit wig better than ableton…???

Complicated. Short answer is no, probably not - Ableton just does more stuff, and often better (especially considering it’s stock effects). Longer answer is The Grid/modulation is Bitwig’s big selling point - if you want it, you get it because there’s no easy alternative in Live, and for some people that’s enough to drown out any other benefits of Ableton.

You say you don’t want to learn M4L, which is fine, but you don’t have to learn it to use any of the thousands of M4L devices someone else has made. They’re literally drag-n-drop and they get loaded.

Live 11 (which is like 2 weeks old) has some crazy generative music capabilities - basically everything MIDI now has a Chance parameter. Nothing modular built in, though, so Bitwig still comes way out ahead if you want that workflow.

Bitwig are ex-Ableton developers. Both can do what you want, it just depends on your approach. In such case Bitwig is bit more budget-friendly compared to fullest Live version which is Suite. Both DAWs have a very similar workflow so it’s easy to switch around between these two especially when you’re an experienced Live user. So, I use both, Live 11 Suite and Bitwig 8-track version. I rewire it using JACK.

Some pros of Bitwig Studio (stuff that comes to my mind right now):

Some pros of Live Suite

Just run a demo. Bitwig gives a full unlimited access but you can’t bounce/save. And you can get Live 11 Suite trial for 90 days which is plenty to start liking/hating it.

Also a long time FL user and I demoed Ableton last year when I had an Akai Force as well. I can see the appeal, but I couldn’t get past Ableton’s piano roll after coming from FL. It was just so basic in comparison, things I’m used to doing all the time just weren’t possible. So I found that I could make stuff and make it sound pretty good with the stock plugins, but it all felt really basic. I’m sure I could do more with it if I put in the effort and learned, but I forgot how much I hated that early on in music production.

Bitwig is a different story if you were going to use that mostly for generative music, well then you largely get to avoid the piano roll. And I assume you could grasp the grid system pretty quickly coming from FL Studio’s patcher. But I haven’t used it yet, so I couldn’t say for certain. Of the two, my pick would be Bitwig just because I haven’t used it yet and Ableton was pretty much nothing but frustrating for me.

Just learn some modular fundamentals and you’ll be good to go in no time. It might seem really confusing and overly complicated at first, but it’s a really fun journey if you’re open to it! 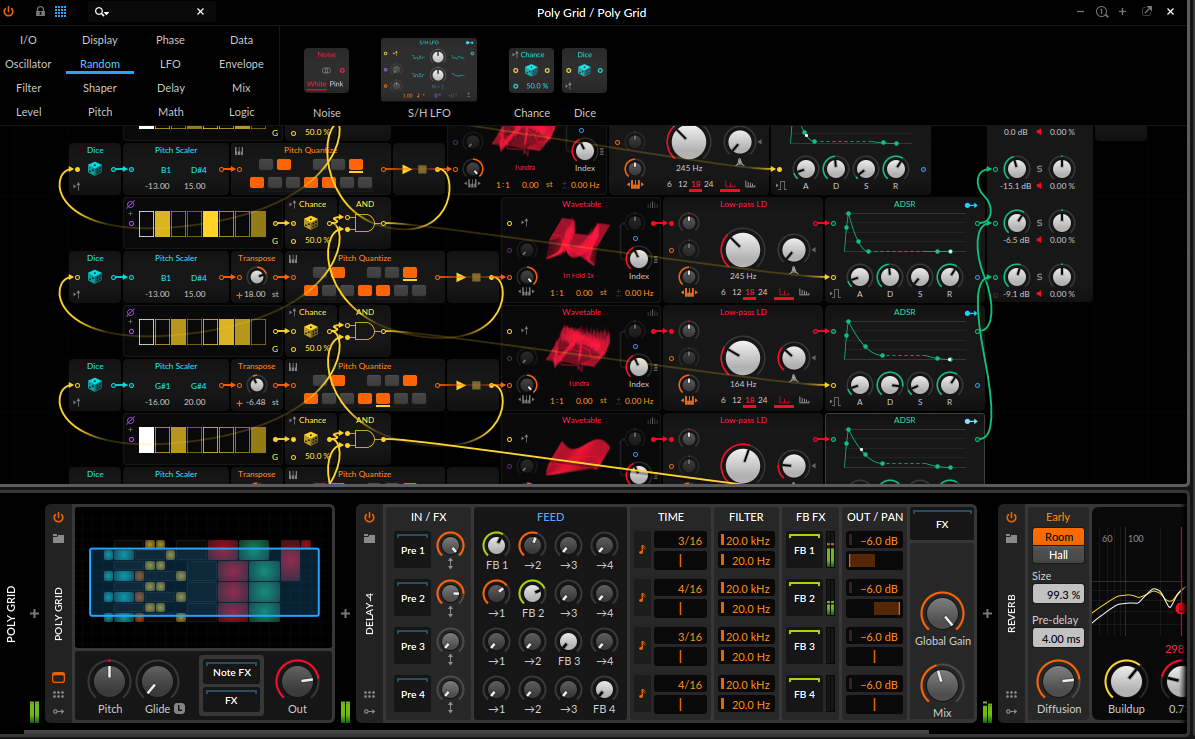 Here’s a simple generative patch I did earlier today, if you want to follow along I can hand over some patches and stuff

. Also if you get lost, just use chance and dice or s&h wherever you want because that’s also a guaranteed way to fuck shit up

Also more on topic to the OP, I like all of those daws for different reasons. There’s no reason not to just use whatever you want and drift in and out of different workflows. Why be rigid and exclusive about it?

Bitwig is awesome imho. Yeah, Ableton still has some tricks Bitwig can’t do (Capture function and some audio workflow things mostly imho), but if you are into modular stuff and creating your own instruments, hard to beat BW with the Grid imho.

Also, Ableton wants 200 bucks (or 140 to downgrade to a smaller version…) to update my Live version, basically just to give me MPE (and a few things I don’t need or want), so it’s not hard for me rn to NOT update Live and wait and see if they maybe want to do some awesome “75% off updates” deals at some point or if they prefer to push me to Bitwig completely.

Point 3 is a big thing for me, I loved Renoise, still do, but somehow it pushes me in a direction which is not how I want my stuff to sound. Of course it’s not the tool but the user, but Renoise made some tools easier to reach…

There’s no reason not to just use whatever you want and drift in and out of different workflows. Why be rigid and exclusive about it?

Really good point, there’s no reason to limit yourself if you find different workflows in different DAWs that work for you. Live is my daily driver, but I generally like to do my final mix in Reaper because I prefer a ‘traditional’ kind of layout for that. Lots of different, useful combinations out there, but it takes learning and experimentation to figure out what works for you.

My brain doesn’t work that way.
As I have limited music time available I need a focussed setup or I won’t finish a single song.

Not sure if this question is for me but I’ll answer any way…
1.I like it kinda easy seems less daunting then ableton
2. The only thing I might difficultly learning is the generative stuff with the grid…and maybe routing effect. But it is intuitive I feel like I could learn it and use it effectively in a few weeks.
3. Once I learn the generative side and the grid I can make more complex music in less time. Also there are some phase fuckery effects and oscillators in version 3.3. Which seems to function like a built in stock version of serum based up what I’ve heard about serum and my light dabbling in bitwig…but I’m not a power user only did one few hour session

It’s definitely not a bad idea to try something different.

1.I like it kinda easy seems less daunting then ableton

They’re both super similar tbh, bitwig just has a lot integrated which makes it the best ‘all in one’ package by far

You could probably get it down in a few days. I’m not sure if I mentioned it or not but Polarity and Taches Teaches on YT are great resources for all of this

Their WT oscillator is a little more like Phase Plant’s imho, but if you want a completely free Serum clone just use Vital

I’m just chiming in for anyone else who’s on the fence about BW because it’s seriously good stuff. Even if you just run it in demo mode it’s an awesome learning tool and wonderful gateway into modular!