Right so I’mma tater…I dont hate because hate drains life energy…and im not famous because I was never the popular one, it is what it is…

Why the thread because famous people have haters…

And fame can corrupt people…or they cant handle it.

So…Kanye please stop…
Taylor hire a pr person to deal with it so you dont have to and so that you have time to get a worthwhile hobby…
Mr.nugent just retire…

Although I like it here under my little rock, I’m curious. Is it important?

Funny, you mentioning how beef is basically the new marketing reminds me of the last band I saw a commercial for on TV, maybe 10 years ago now. Even then, it felt like “this isn’t the way bands advertise anymore is it?”, and I wasn’t even making music yet, let alone trying to market it. I, apparently a target member of their audience, who saw this add for this band’s album available at Best Buy over and over and still remember it to this day, was questioning it back then. The band was Chickenfoot, and I need to look them up later.

I’ll tell you an add I saw recently that is a hell of a good idea though: youtube music. It’s the wild west on there, so what I’ve seen a few times now is people take out an ad, and then just put their song in as the add, as in the whole thing. Youtube music occasionally has a long add that’s like 5 minutes, so musicians have bought up that space to put their songs in. Very slick, if you’re listening to any kind of hip hop, it slips right into your playlist, you would think it was a song you already knew and liked. Doesn’t work as well when it’s going between a couple of jazz songs, but youtube music doesn’t really know how to advertise to me yet. 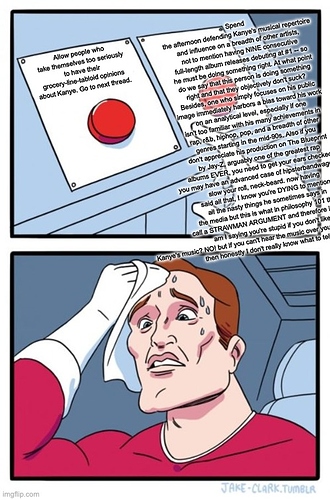 His shoes are pretty cool, if a little overhyped. Yeezys, I mean. And he genuinely does push materials use and design with them. Apparently trying to make shoes out of algae now, which is bold even by Adidas standards. I only know all this because I work for a company that sells shoes, so you pick this stuff (and some preferences in styles) up over time.

He is one of the greatest confidence men ever. Isn’t he selling people religion now basically? He is supposedly all Christian now?

All the hate kanye gets is kinda unneccessary…I’ll even go as far to say the same for deadmau5…lol and skrillex too lol.

Frankly for myself none of these people are even on my radar. Kayne is kind of like…academically fascinating? If I hear he has done something crazy I’ll go read about it for sure.

to be honest I think he’s incredibly insecure and he’s dealt with some shitty situations over his life and career (like we all have) that have strengthened his confidence in sharpening his message… even if right now it is leaning toward the shallow end of the Evangelical pool. I respect that he’s able to pour himself all in like that. For real, “Jesus is King” is a pretty solid record. Not his best but… So many great parts. as a studio producer I think he’s crazy talented and innovative. he has a good ear. the whole Yeezus “I am a God” thing is part of the performance art, part of the show, and I think that goes with this whole newly devout Christian thing too.

I’ve watched him and his musical output grow over two and a half decades in really interesting ways.

Does he say stupid fucking things sometimes? Yes. But his twitter also has some pretty profound and psychedelic head-trip blurbs too, same with his rhymes, even if they’re often criticized as “bad rap”. Meh.

People forget to shut out the noise and listen to the music. That’s my point.

Totally understand why he’d not be on your radar, the problem is all these philistines who diss him without a shred of beef to back it up other than drive-by radio gossip. it’s not just him that it happens with… so many other spotlighted artists whose music gets shit on because of some dumb tweet or they shaved their head then drove a car with their baby on their lap. there’s so much noise everywhere all the time people sometimes forget to put the USA Today down and actually listen to the music.

Yea, when I say academically fascinating that’s me thinking about like if his behavior is performance art. I mean that is kind of being any kind of celebrity these days. Always assume a camera is watching and act accordingly–perform for it.

As far as being a philistine hater with nothing to back up their hating, I am a reformed one. What a waste of emotional energy. And I think as a musician you can always look at a song or an artist that has some kind of following and ask what are they doing right? What can I take away from what they are doing? And that might not always be the music directly.

Exactly almost verbatim how I’ve heard myself express that too. Right on man.

Everything shouldn’t be about the p word…

Everyone has said stupid shit…I mean look at the stupid shit on the net…ye who is without sin cast the first stone…yeezus.

what the fuck is the P word?

and yeah, I say stupid shit all the time. if I had as big of a platform as him, I can only imagine the fuckin trouble I’d get into for opening my loud fucking mouth.

what the fuck is the P word?

and yeah, I say stupid shit all the time. if I had as big of a platform as him, I can only imagine the fuckin trouble I’d get into for opening my loud fucking mouth.

yea maybe kanye just has enemies, maybe its because some ppl cant stand that someone like him is successful in life…either that or the stupid shit that he says miffs people…which causes them to join the hate party…me personally I don’t care…to me its seems like that either way its a kinda ridiculous behavior that both sides engage in …