The free plugins thread is great, but I think we should have one dedicated to cheap plugins for those of us producing on a budget (but still willing to pay) or trying to find some bang for your buck plugins.

I’ll add some more as I find em. Kinda realizing I didn’t have as many cheap ones as I thought lol…

I mean, everything at Valhalla DSP is worth way more than the $50USD he asks per plug in. Valhalla Vintage Verb is the only reverb I’ll ever need.

I’ve heard good things about Valhalla, definitely will check it out!

Make a pluginboutique account. Keep an eye on their sales, get the free thing they give away every month with a paid purchase, and you’ll have a baller collection in no time. I got into it about 6 months ago, got Izotope Iris 2 and Mastering the Mix Expose free since then. Both are great plugins that I now use all the time.

Oh, and also, you get reward points you can use towards cash off future purchases, coupons on specific VSTs, or free sample packs. It’s actually a really generous system. Just maintain self-control and make sure you only buy what you need.

I mean, everything at Valhalla DSP is worth way more than the $50USD he asks per plug in. Valhalla Vintage Verb is the only reverb I’ll ever need.

I do not quite agree with you. I saw it at that price.

I’ve bought some cool M4L devices for under $5, but this isn’t that thread. I’ve also seen some groovy kontakt libraries that go on sale for practically nothing.

Some of the best free plugins have a ‘cheap’ tier which unlocks better functionality than their free counterparts, such as:

With that said, I’ve spent like $20 on VSTs like The Mangle and Carbon Electra and regretted my decision almost immediately. Somehow there are even free plugins that work better than these glitchy piles of shit, however it’s worth it to consider that these guys probably have no incentive to actually release stable updates at $20 a pop. I wouldn’t do it, either.

In conclusion, I’d rather go with the free stuff that works than the $15 underdeveloped pieces of trash that crash your DAW every 10 seconds, but then again I’m also the type to manually cut the white noise blasts out of my trialware that desparately wants my credit card. Don’t judge me.

Fair enough. I haven’t had any problems with The Mangle since buying the full version, for some reason my computer didn’t like the demo though, it’d crash Ableton a lot. Strange.

Edit: I’ve also upgraded processors within that time though so that may have made a difference.

Drop that code into the voucher spot today and tomorrow only at plugin alliance and you get the Shadow Hills compressor for 50 bones. I’m gonna give it a shot at that price, probably won’t even have time to install it before the deal ends, so no review by then.

If you want to buy PA stuff, consider bying a voucher code from someone who doesn’t need it. I got a 250$ voucher code for cheap a few days ago - used it to get Knifonium (yeah, I listened to some demos again and got weak for all those tubes

), SPL Iron, DearVR Pro and I updated DSM-V2 to V3. And it even reduced the VAT to zero. I thought I had everything from PA that I needed but that was a pretty nice deal

Hey guys, check this Humble Bundle out. I can wholeheartedly recommend the AAS plugins. Even the “preset player” is really nice, and the Objeq Delay is really cool. 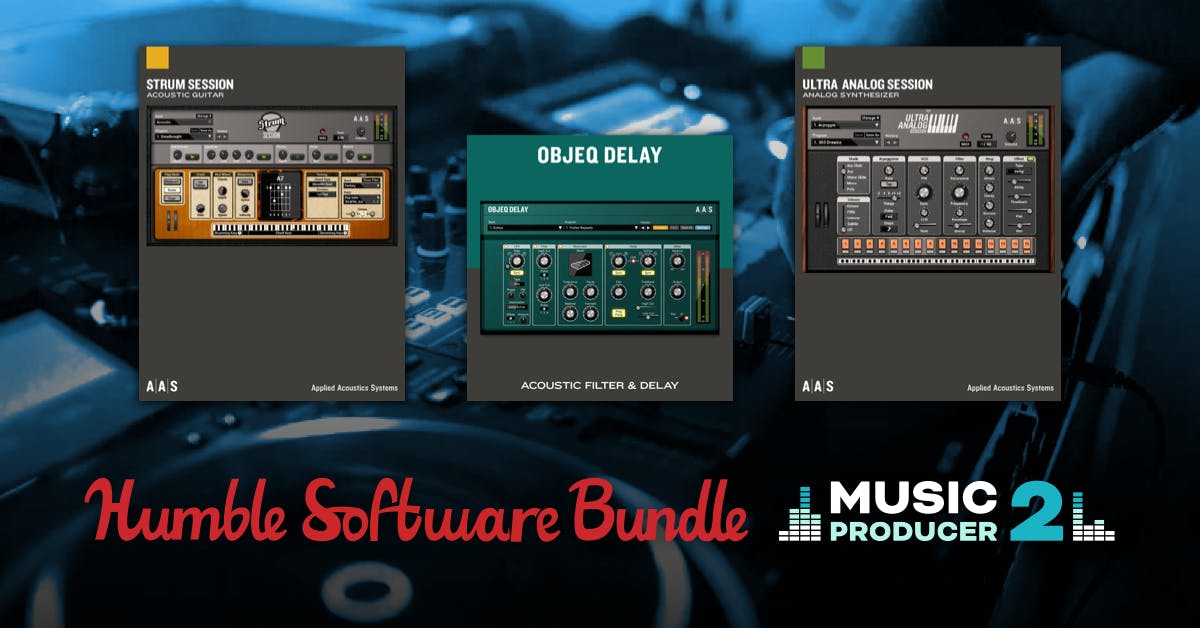 Together with Applied Acoustics Systems, get music production sounds like a vintage electric piano & more. Pay what you want & support charity!

Nice! Didn’t realize Humble Bundle sold anything other than games

They have so much stuff. I have spent a shameful amount of money on that site since it was created. All for a good cause, of course.

I bought at least 6 bundles over the last 1 or 2 years - 2 related to graphic design stuff (Corel and EscapeMotions bundles), 1 was about video stuff (including Hitfilm, the bundle with everything in it was much cheaper than updating Hitfilm from the previous version…), 1 with books and 2 with Game development stuff - did I need all that stuff? Probably not, considering for instance that I’m mainly on Unreal Engine and all the game development stuff was for Unity and has to be converted at least, which I of course did not do so far… but as Creepr said, it’s all for a good cause. And cheap

I just bought a comic bundle and some frontend developer books…once you start you cannot stop.

this thread is due for a resurrection:

Super good price(10 clams) on TDR Limiter 6 over at AudioDeluxe:
https://www.audiodeluxe.com/products/audio-plugins/tokyo-dawn-labs-tdr-limiter-6-ge
Appears to end on the 30th/1st.

It’s technically not a plugin in itself, but modules for environments like VCV and Voltage can be as low as $1, and some really decent ones are under $5 on a good day. I’m only mentioning this here because most people don’t even know they exist, or that you can just use them as FX instances. Both environments have a ‘free’ tier, too.

I’m “this close” to getting VCV rack2. Having it in perfect sync w my DAW and also the ability to talk to my physical eurorack system is pretty huge.

. There’s also a potentially cheaper way to sync it to hardware yep, it’s on sale for $50 right now

Cardinal is really cool, it’s more limited but there are so many modules included, it’s more than enough for me to play around with when I want to use a modular in my DAW.