I’ve seen a lot of scattered talk about soft modular but I figured we could maybe aggregate some of these under one roof, and share some insight across platforms such as VCV Rack, Voltage Modular, Reaktor, Audiomulch, Oscillot and possibly even others like Modulat and Max.

There’s quite a lot of these, and even though they can be quite different I thought it would be cool to eventually see some patches / demonstrations of projects dealing with all things virtual-wire. You never know who you might inspire by showing off a little

What are you currently using, and for what purpose mainly?

I’m a regular ‘soft modular’ user - I love the wacky and unexpected interactions you can get out of blindly routing things together, and the joy of building up sounds from scratch is pretty visceral for me. Here’s what I’ve got:

VCV - it was free, of course I tried it. Big attraction was free access to things like the Mutable Instruments modules. I can get it to work with Ableton sometimes. It’s fun on it’s own, but I wish it had better DAW integration.

Softube - everything VCV wishes it was, but it costs money. Real deal Doepfer modules is awesome, and they mostly sound as good as the real ones I’ve used. Softube makes some nice effects (I’m fond of Tape and their compressors) and having them as modules is great. Downside is it’s a kinda pricy ecosystem, but still a lot cheaper than the hardware.

u-he Bazille - lots of fun, great filters. I’ve gotten some amazing out-there sounds out of it and I use it a lot.

Arturia collection - the Buchla is the obvious standout, but there’s lots of patchable/modular goodness in there. 2600 and Moog are both solid and fun.

Reaktor - been a user since around '00-'01. It’s awesome. Blocks makes it more awesome for fast sound generation, but takes away some of the free form experimentation I get when building up my own modules. Reaktor’s just limitless if you dig in and get comfortable, and there’s enough free user modules (and entire setups) that you’ll never get bored. I have an embarrassing amount of money tied up in audio crap, and I will say hands down that Reaktor is the best money I’ve ever spent on an audio thing. It’s just does so much.

Not familiar with Voltage Modular, what’s the elevator pitch?

Oh and ModulAir is a cool and especially free modular VSTi - not as flexible as VCV of course, but you can just drop it on a MIDI track in your DAW.

Reaktor - been a user since around '00-'01. It’s awesome. Blocks makes it more awesome for fast sound generation, but takes away some of the free form experimentation I get when building up my own modules. Reaktor’s just limitless if you dig in and get comfortable, and there’s enough free user modules (and entire setups) that you’ll never get bored. I have an embarrassing amount of money tied up in audio crap, and I will say hands down that Reaktor is the best money I’ve ever spent on an audio thing. It’s just does so much.

Have you tried the Toybox stuff for Reaktor? The piano roll block in the Synth Bundle is amazing! Definately worth checking out and they have a sale on at the moment, too! 30% off. 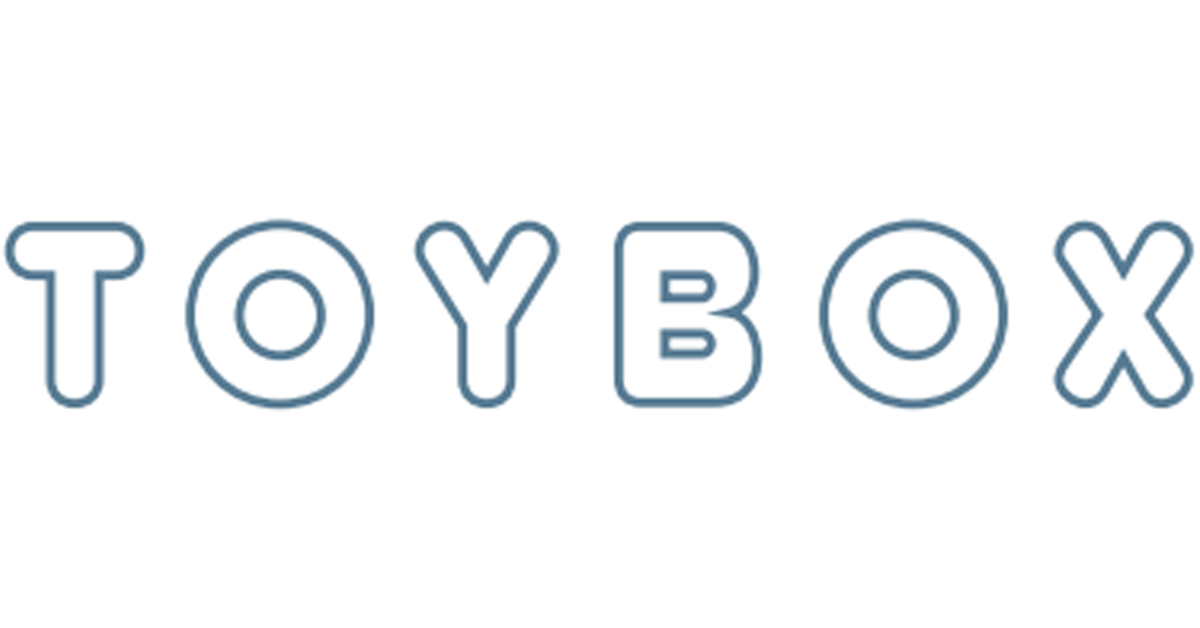 Toy Box is a collection of over 200 modular software synthesis blocks for Native Instruments Reaktor that can be wired together in limitless combinations using virtual patch cables on the front panel. The blocks combine sequencing, sampling, digital...

Even more Toybox stuff today! There is new pack which is free.

I posted this in the Discord (and the video doesn’t really do it justice anyway since it’s considerably complex), but this is really worth checking out for anyone who wants to build their own MIDI sequencer patches with loads of modules and functionality packed in. I had been looking for something like this for a long time and Sugar Bytes of all companies made it; go figure.

Also, this guy is pretty cool (the synth, that is). I picked it up on the intro sale, it keeps getting updates, and despite its shortcomings it kind of kicks ass for certain types of sounds. AAS are kind of the masters of physical modelling (personal opinion), and their filters are strangely the centerpiece of the synth, but for that it’s pretty awesome to fuck around with.

Side note: that guy (the man this time) teaches a lot of modular fundamentals on his channel. Not an affiliate, just a messenger.

Last but not least, I’m running a demo of this and it’s basic as hell for their asking price ($99) but it’s definitely worth demoing instead! I’m sure the fun is going to burn out before the 30 days are up, but it can be fun to try some patching in an extremely limited, semimodular environment just for the hell of it. Sometimes the challenge can lead to pushing a little harder, learning a little more, and making do with less (modules).

This last one doesn’t really count, but due to the semimodular matrix I’m kind of giving it a shout-out because it’s a lot of fun to play with. At its heart, Algoritm is an FM synth but instead of having fixed operators and carrier banks you get to basically plot your own modules on said matrix and route them wherever you want, including feedback loops and all sorts of other shenanigans if you so wish. Honestly, they should market this as a split FM / modular synth because it doesn’t look as cool on the surface as it actually is.

I hope I’m not the only one still playing with wires!

I’m probably going to keep adding to this thread periodically until someone tells me to shut up or put a hotdog in my chocolate starfish, so to speak. 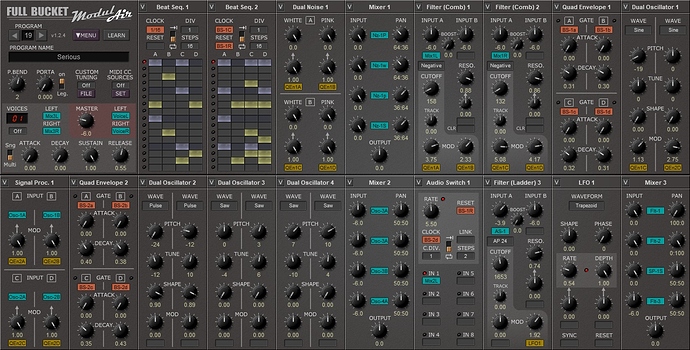 This one is actually freeware, and I don’t know where the hell I was when it came out because it’s jampacked with features including sequencers (linkable, too), insane amounts of filters and filterbanks, amps, EGs, LFOs, and pretty much everything to help newbs learn the ropes without overwhelming them (cough, vcv rack).

Also, it loads wavetables and samples. I forgot to mention those important details.

I wish I had started with this because it has just the right amount of features, such as a master amp to bus everything through and not a whole hell of a lot of CV mixing or anything to really confuse the hell out of newcomers to modular plugins. It’s like a semimodular, but not; more like a modular without wires.

(Also, you can’t confuse audio with CV in this which makes it the perfect level of ‘training wheels’, but still powerful enough to go full-speed if you understand the metaphor I’m going for here)

I’ve been playing with it for days and I still haven’t discovered all of its beautiful quirks and abilities, but I’ve discovered a lot of the crazy shit that’s packed under the hood and it’s all pretty insane, especially for freeware.

As a cool bonus, you can modulate pretty much every parameter from the ‘outside’ (that’s your daw, or possibly another modular VST host if you’re as sadistic as me) so if something isn’t covered as a mod source or destination, you can just go ahead and make that happen anyway.

ModulAir is awesome! The only modular system I’m still using apart from Bitwig The Grid and Unreal Metasounds. 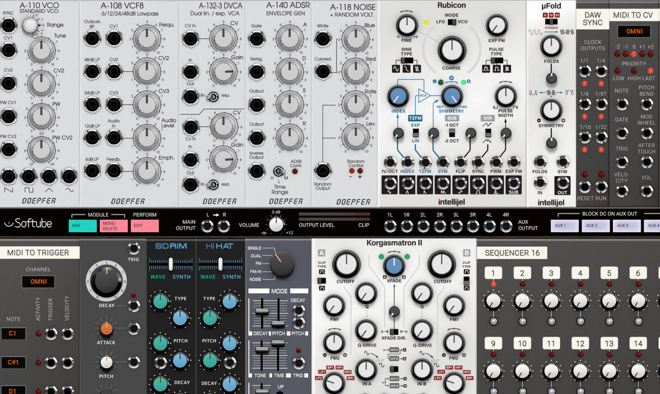 Softube Modular (finally I get around to this one)

Dear diary, I bit the bullet and bought this thing on sale even though it had close to 30 days left on the demo period. Please forgive me of my sins, father (also, hail satan, while we’re at it). In my defense, the lack of fancy modules kind of forced me into a cool little headspace that I don’t really have with some of my decked-out environments (VCV and VM, among others) and got me to actually use my brain again to create things like probability, dice, chance, and linked sequencer lines without just pulling “The Probability Gen 2000” off of the fake shelf. Having to make do with less modules, oddly enough, can bring out the part of you that uses both the left side and right side of your brain and therefore I can justify spending more money on modular.

Yeah, this is how I sleep at night. My wife is going to kill me. See you guys in hell. 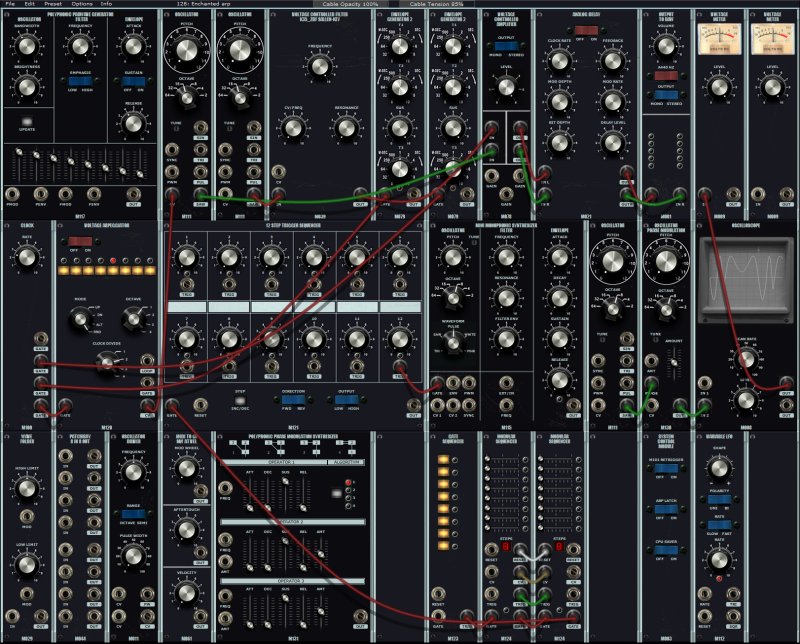 Uh oh, more freeware. 40+ modules. You know what that means - of course I need it.

This one is called XSRDO Analogy, it looks to be the successor of something called XSRDO Patchwork, and honestly the update makes the old one look way worse than it probably was at the time. Anyway, there are no modulator maps for your DAW and opening the VST window causes the audio to glitch every single time, but so far I’ve had zero crashes with it and the mechanics work like you’d expect.

With that said, I haven’t tested this extensively and there could be some fundamental flaw(s) I don’t yet know about, but it looks super capable, comes with 40+ modules and works like any other eurorack. Why use this over the other ones, you might ask? Because you can’t have too much modular, duh! 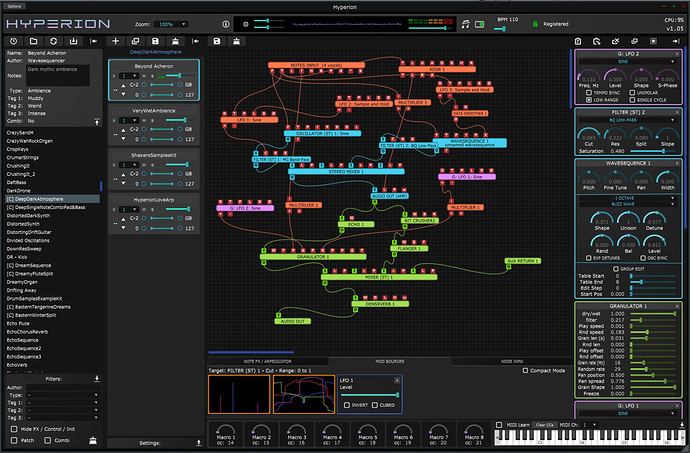 This one is quirky, odd, and weird… but hey, so am I so of course I’m going to love it (and so will you, just wait for my ingenious sales pitch that nobody asked for or paid me to make!). Basically data cables are split up into categories (per voice / global, data, midi, audio, FX) and as you can probably tell, it’s worlds away from the CV-eurorack style that we’ve all come to know and love - but in a good way.

It also sounds very ‘digital’ to my ears compared to a lot of the analog-modelled CV-oriented plugins out there, but once again, this is kind of a welcomed characteristic because it seems to totally set it apart from the rest for creating a new variety of cool sounds. Plus, you can stack layers (similar to UVI Falcon) and apparently have them reference each other, meaning the possibilities get really insane the deeper you go.

Also I made a post about this elsewhere but I had to do one here as well, sorry mods. You can delete the one in the other thread if this comes across as spammy or something, I just figured more people would like the MAX / Polygrid style UI of this one.

Oh, and the demo is 90 days. That’s quite impressive.

I thought about making a post about the 90-day demo but you beat me to it. I’ve been impressed by what I’ve seen of it, but my hard drive is feeling a bit slammed by all the new stuff I’ve bought. But this one is top of my list when I get the modular bug for sure.

JRRshop has it for $54 right now in case that isn’t common knowledge. I just pulled that trigger myself