I have been thinking the same thing…damn your inspirational purchasing!

I’m getting a new graphics card for my desktop, on the topic of building our own computers.

I think one of the biggest advantages for building one’s own computer is selection of exactly what you want, and being able to cut costs in some areas in order to fit your budget, rather than going off what’s available through a distributor.

It IS really easy putting computers together, as @Roo_Stercogburn mentioned, basically Lego with power cables. The actual installation is simple, just plug like sized cables and ports together. Be careful of ESD so you don’t fry your CPU. Make sure to use thermal paste on your CPU (most CPU’s will come with a packet anyway).

The only tricky part is making sure everything’s compatible before you buy the parts. That and if you build a small computer it can be tricky getting wires plugged in but that’s more of an assembly issue rather than a real technical issue

Knowing how much power you really need can save you from purchasing PSU’s that are way too powerful for your setup, most computers really don’t take much power unless you have some crazy gaming system or you’re doing a lot of overclocking.

But yeah. I just upgraded my graphics card because I’ve been playing games and was turning stuff down, so I figured it was time for a upgrade. I ended up getting an RX 5700 XT, which should be arriving tomorrow!!! I also upgraded my PSU because mine was a little on the light side, and wanted to make sure I wasn’t maxing out my PSU.

So the GPU and memory and busses are specced by AMD, who also pays to have the chips manufactured. AMD is also responsible for software integration, so making sure that their chips work with windows and with various games in the form of drivers. Then AMD turns around and sells those chips (and maybe the memory as well in certain cases) to what are called “board partners”. These are the Asus, Asrock, MSI, EVGA, Sapphire, etcs of the world. They take the GPU, the memory, and AMD’s specs for busses, and add their own power delivery and cooling systems to it. The board partners then sell this to you as the end product.

ahhh I see. So when you’re choosing a brand of GPU to buy, if you’ve decided on AMD vs. Nvidia on whatever card, is there any deviation in performance from different suppliers?

Absolutely. They’re based off the same basic design, but the specifics of the board down to the actual PCB and ancillary stuff like power distribution, cooling, etc are specific to the manufacturer. Furthermore, specific cards will be factory overclocked using binned chips that are tested at those frequencies.

are built on the exact same chassis, but aren’t even close to the same car.

Ah man. Dug the model samples out today to try and get something going for the current comp. I really can’t say enough good things about the model samples. Sure it is limited. And once again I say, it is the new Electribe sampler we deserved but Korg couldn’t give us. I’ve got a main riff down for a Jungle track and have two voices left. I mean, it sounds pretty 90s but this is no problem for me.

I guess it depends on what your goals are, but if you want to make sweaty basement techno, highly recommended.

Oh, you got it already?
Or was it the m:c you were ordering?
I can’t remember, either way those 2 seem cool! How does it handle melodic stuff?

Oh, you got it already?
Or was it the m:c you were ordering?
I can’t remember, either way those 2 seem cool! How does it handle melodic stuff?

I’ve had the Samples and am going to order a Cycles when they get more in stock at my usual place Zzounds.com.

As for melodic stuff you can play the samples chromatically with the 16 step sequencer buttons or use the pitch knob. Both can be parameter locked. I haven’t done a ton of melodic sequencing on it honestly. Mostly used it as a drum machine and one shot player, but trying some new things out this evening–pitching 808s and samples and p-locking sample start/sample length to cut up breaks.

I was going to bring up the same example, but with powertrains.

@IO_Madness there can be some deviation in performance, but it’s usually not significant. It mostly comes down to how cool the card can stay as modern GPUs will basically go as fast as they can without overheating. Most practical difference is how loud they get, where better designs will be a bit quieter for the same performance. At the really high end, you get into custom BIOS with big overclocks on them, but it’s often more worth it to just go to the next GPU model up

I think a Jungle live set is happening on my Model: Samples. This may not feel like full songs but kind of collage of beats and sounds in the style I can arrange and modify live. I’m defo going to work more on this and just record something and if it isnt perfect meh.

I watched the Telekom videos w Anthony Rother on you tube this morning and by evening it sounded like a breakdance competition at my house. Drums aside (Ableton drum racks) I used every synth in the room.

The Vermona Perfourmer MKII has always been setup well out of arms reach for me so I’ve hardly ever used it.
The thing about the Performer is because it has no menu diving you look at the panel and think thats a subtractive synth that i can easily use and not even bother with the manual.

However now its racked very closely to my setup i decided to dedicate a full day to reading through the manual and trying everything out word for word, and wow what a wonderful machine, there lots of little quirks i knew nothing about.

To be honest in the past I’ve had it hooked up via midi and sometimes it would skip the odd note, i didn’t want to send it back to Germany for repair it seemed just too much effort.
Now after reading the manual and fully understanding the functions i know there is no fault at all just stupid me thinking i could use it without reading the manual.

I think the key to a lot of analog synths is learning about VCAs, once upon a time id look at the VCA section assuming thats just the volume and thinking nothing else of it, thankfully i got into Eurorack which really pushed home what VCAs actually do and the number of things they can actually do or id still be thinking it just a volume pot.
This knowledge helped when reading the perfourmer manual.

Next mission: go through the Korg odyssey manual.

DAWs I own that have analog style sequencers built in.

Bitwig, Reason, Cubase… Im sure many of the rest do too.

Not sure if “fun” is the word I’d use, but yeah, I’m not terribly afraid to open up gear that isn’t under warrantee (which is most of what I have these days).

I have an Alpha Juno sitting in the basement, all opened up, guts everywhere, waiting for a deep cleaning. Just haven’t built up the nerve for it just yet.

Apart from snare, hh and two more one shots, all sounds on this track are Microfreak.

I wasn’t expecting it could be so aggressive…

like it Auto, some people have been so wrapped up in the supposed secret sauce of analog for that long, some forget how awesome digital is.

Almost getting things how i want the rack I’m happy now that i got rid of the sofa. Put the Analog 4 in there, at the moment I’ve got Digitone and Digitakt working with overbridge but overbridge just won’t see the A4 I’m sure ill soon unravel that mystery.
Placed an oscilloscope next to the rack, just waiting on a BNC to Audio jack cable from china, the one i have has problems with a loose connection, will come in handy to see whats going on with the perfourmer.
The toy synth under the window is where the Osmose will go when it arrives.
Brought the Quasimidi 309 out of retirement which leads me to my next gripe… Mixers!!! why the hell is it so hard to find mixers on the market that have more than 3 or 4 stereo channels, they all seemed to be aimed at bands using mono stuff and not synth dudes with lots of stereo synths. I do have a Rane rack 8 stereo channel line mixer on my desk, but to get a traditional looking mixer with faders and lots of stereo channels is almost impossible.

Oh and i had to upload another picture of the Virus C, its like having my first girlfriend back, what a fucking awesome synth. 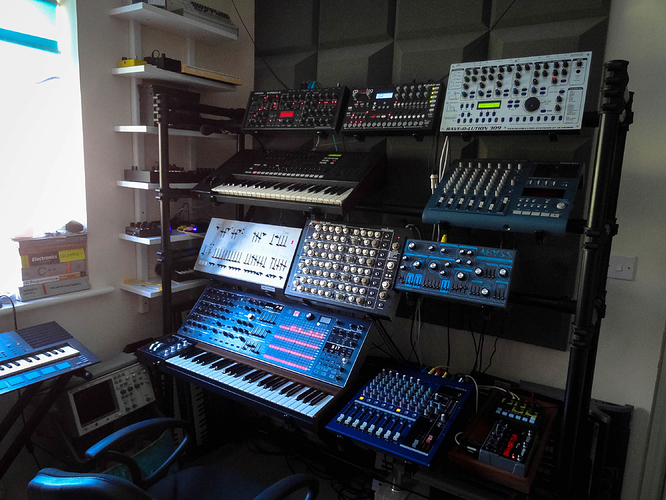 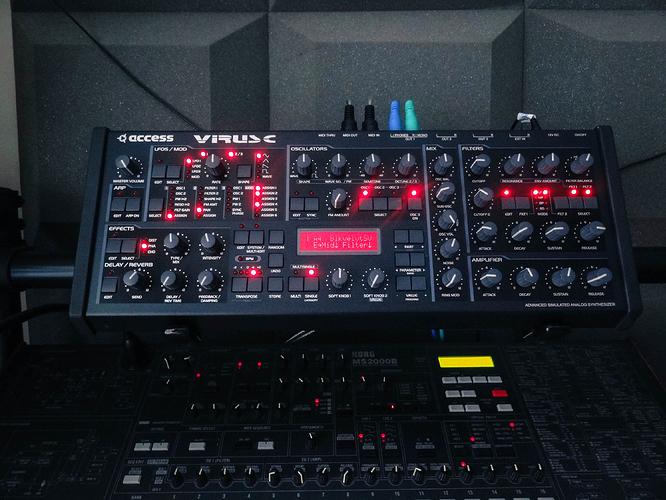