Let’s ignore the sloppy playing and somewhat questionable use of notes and lo volume, but this a single patch on the Opsix, definitley one of the best synth patches I programmed.

That sounds amazing! Are you tweaking the parameters live too?

Only the modwheel which is assigned to the filter cutoff, the rest is envelopes and a hint of sample and hold on one of the fm operators

That basically qualifies as a track on its own in my book, nicely done! (also stop making me want that synth…)

So Auto has been making me feel all bad as I promised some clips of me playing with my new Meris pedals, and he keeps rolling out great sounds out of his new toy.

So here you go, just recorded with a default patch off the LXR. There are so many knobs and so much interaction, I made a few non-musical changes in there, but these should give an idea of at least one thing you can do with the Ottobit Jr, Polymoon, and Mercury7.

I just noticed the huge amount of silence at the end, but I am tired and going to bed. you all know how to fast foward right?

MY MPC500 finally came last week. The friend of mine I bought it from didn’t mention that the memory was maxed out on it. The goober he bought it from stuck a 256MB SODIMM in it, but it only reads it as 128MB and when I got it the stick was loose in the battery compartment. I bought a 128GB CF card for it and after inserting it the machine would lock up hard. Turns out, with an unformatted card this happens, particularly one this large. Had to turn off the autoload function as well 'cause that was causing lock-up issues. Basically, I would enter a menu and each step of the way the thing would lock up for 3-5 minutes at a time before I could take another step. Once I got the card formatted and autoload turned off the freezing stopped. 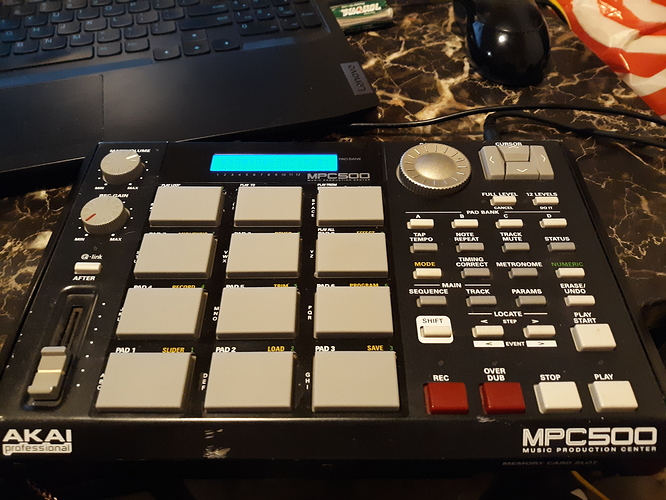 All ya’ll with your pedals have me REALLY missing this cheap as shit “Analog” delay pedal I used to have. It was like a 25 dollar job but frankly it sounded really nice. I’ve been all over and can’t it anymore. I feel like it didn’t even have a brand, it was like sky blue and just said “Analog Delay” on it.

thanks Relic, I realized after posting and re-listening that they could have been maybe a bit more succinct, but on the other hand, if I practiced and hemmed and hawed too long I would probably never get anything done with it. I am going to try out some other things soon and will update the playlist.

Re: LXR, the funny bit is that there is a custom firmware from a guy named Brenden Clarke that is super popular and I was using, but it kept having issues locking up, so yesterday I went back to the default from the maker and lost all my patches (as in, they are still on the old SD card, but do not work with the factory firmware). This is literally just the first default patch, with a pattern I made up in 2 minutes. The thing does sound fantastic though, I am almost tempted to order a second kit just to have it around in case something happens down the road and they are no longer manufactured.

Yea, when you are just demoing something for the sound you just gotta hit record. Generally, speaking I think “just hit record” is good advice especially since storage is filthy cheap.

I mean, that’s cool that you can even have custom firmware. I don’t remember the LXR too much from when it came out, but it is sounding pretty damn good here as are the pedals.

I know I still owe ya’ll a Tone Beast demo and I might as well throw in the Rat 2 since we are doing pedal shoot outs.

I particularly like the third one, nice space and movement, but they all sound nice

I built a Befaco output module last weekend so now i have stereo out of the modular, ive not build anything in a long time and was surprised how much my eye sight has gone down hill and most surprised how much of an awkward build this was. Dont think the wife was too happy me using the kitchen table as the bench i used to use in the garage is now occupied with technics 1210’s.

Love how i can now use the Serge Resonat EQ in stereo along with Rings, Clouds and Beads lost half a day down the rabbit hole making mindless noodle

PS the Patch bay is getting some fare use too

Is the befaco stuff all thru hole building?

I’ve not gotten up the nerve to attempt a surface mount build.

I got to the point that even if I’m just programming a patch on a standalone synth, I have the sampler on stand by, you never know, it might be a nice riff or a happy accident.

I got to the point that even if I’m just programming a patch on a standalone synth, I have the sampler on stand by, you never know, it might be a nice riff or a happy accident.

I’ve currently got a my DJ mixer semi- permanently setup so I can feed it synths and whatever I want from my cellphone. I can imagine doing things another way, because I never used to have my samplers just read to sampler. What a waste of time!

I’ve not gotten up the nerve to attempt a surface mount build.

Tack it down and rub it out. It’s surprisingly easy until you get down into the ridiculously small 0603 and lower package sizes as long as you’re using the right solder and flux.