Tales from the isolation

New dude at work from third shift is a big music geek, so today I gave him a CD of my Devil Dance EP with a bonus track. He was fuckin stoked.

I’ve been listening back to that one recently with the new headphones, and I like it more now than when it came out. There’s some really good writing in the second half that slipped by me last year.

Glossy, not matt, but I didn’t have the option aaaaand you can’t beat sixty bucks. Gonna finish and scan this collage first, then get to that later.

Next week it’s back to ten hour shifts in 80 degree weather in non aircondintioned factory…or so they say. Plus facemasks…this should be interesting, I’ll be switching to a face shield at work if it gets bad. Otherwise we’re all in high spirits. Good to be back on my old line, even if it’s at a spot that requires extremely fast movement and a lot of pressure (and I’ve never worked it at the speed that is now expected, but I’ve gotten better over the past week). At least my old manager has gotten off my case and it’s not the fucking wrapper. Ugh, PLEASE don’t put me on the wrapper, give me that scrap saw so I can actually converse with people who show up now and again! We’ll see, every week/day/hour has been a new adventure.

At least I’m getting paid, which is more than I can say about a lot of people in town…

I’ve been listening back to that one recently with the new headphones, and I like it more now than when it came out. There’s some really good writing in the second half that slipped by me last year.

Thank you so much! The first three tracks were quite personal at the time (and especially the third…ohhhhh boy), so I feel like I put more energy into them. The last two were repurposed from very old material. The last one is a song I’ve made and released in multiple versions since I was 16, and I finally, FINALLY nailed it.

A few months ago, my ex-wife sent me my CD collection that I left in Japan. I got four Melt-Banana CDs in there, plus a bunch of other crap I had totally forgotten about. I still say Teeny Shiny is their best. That band is (was?) a fucking beast.

Also got some OOIOO and Boredons and all that jazz

Fireworks are weird here. You can buy them legally but you can’t legally use them in Ohio (fuckin’ Ohio). In fact you have to sign something saying you promise to get them out of the state within a certain number of days. But everyone sets them off anyway.

I think we might have some kind of obscene tax on them? I remember when I was in high school so like 25 years ago LMAO…I spent like $200 on fireworks one 4th and I was done in like 15-20 minutes.

In other news…I’m going to fucking die from Covid at my new job. No one in that town is wearing a mask and they are acting like nothing is going on. Some motherfucker walked right up to me w/o a mask and shoved his hand in my face and when I just stood there he goes “oh I guess we aren’t shaking hands anymore” real sarcastic like.

Ohio let bars and restaurants with patios open up yesterday w social distancing. Every fucking fool was crammed into every fucking bar patio I could see on my way home. Saw a picture of a bar in Columbus (state capitol) that had shoulder to shoulder people on their patio.

I know not everyone dies from it but it almost seems random who does and doesn’t. And having had walking pneumonia I wouldn’t want to go through something like that again even in the comfort of my home.

Thankfully my boss was able to get us some masks he uses in silversmithing whose replaceable filters are rated higher than N95 to wear at work. He uses them for some process that makes a shit loud of fumes.

OH whutt, are you not teaching anymore?!

oh I no, I am! I’m an adjunct (part time) instructor and don’t get paid very well so I can’t afford to take the summer off, I just usually get some retail job in the summer. For a long time I worked at this motorcycle leather shop but they closed at the end of last fall.

although I’m slowly working my way to try and work full time for the web company I do freelance writing for.

Hung out with sister all day at my parents’ (she’s kinda stuck here for a couple weeks and is on unemployment. Got a LOT of car trouble). Joked about starting a family owned weed farm. Got into a short sibling quarrel before I left, but all is well. 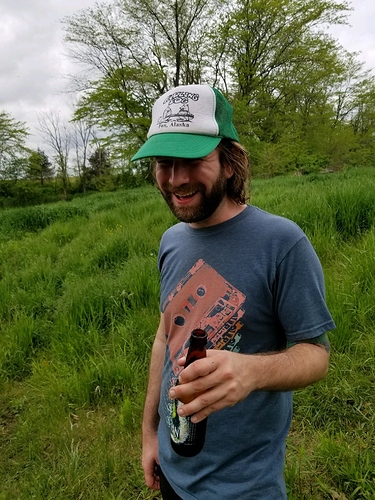 Working on my new collage. Computer screen came in. This town is WEIRD AS HELL, but that’s okay. I like weird shit.

Damn, that’s the collage? Looks like a real photo

He cut out each individual blade of grass and pasted it on. Impressive.

Don’t get me started on this fucking collage. I love it. i guess i gotta turn off bots on Facebookto post it? That’s a new thing.

I found out earlier today that Mersey Beat/Back Beat has been permanently closed. That sucks. So many friendships were formed there. The best venue in Kobe.

ahem I’m just gonna leave this here. Thanks again to @nostromer for this laptop. Still waiting on some cords before transferring music stuff. 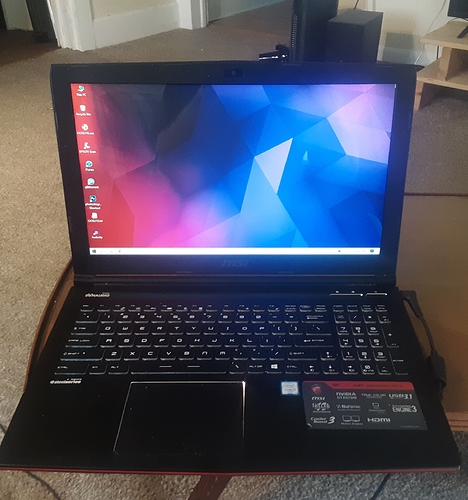 Nice fix man! How was changing it out?

Changing it was a piece of cake. I’m giving this little Roku TV to my sister (removed the superglued pieces). She’s already bugging me about replacing her phone screen (just google it!).

Also, the HDMI cable that Nostro sent was a GREAT replacement for my old cable on my TV that I used to plug my old laptop in. That cable is a big silver mess and falling apart.

I use one of those from 2016 for my music. Solid laptop, hoping to get at least another few years out of mine. Even the onboard sound is OK, though my USB interface drivers are way better for low-latency audio stuff. Just a heads up, if you don’t have a wiped basic version of windows 10 on there, you can free up a ton of space by deleting/uninstalling all the MSI specific software. Only thing I really lost was control of my keyboard backlights, but it frees up a bunch of CPU cycles and hard drive space.

You can also turn off services and stuff to help speed it up. I do hate all the Win10 bloatware tho, like all the MS apps, Xbox, Gaming, things like that. I play some games and I don’t even use those.