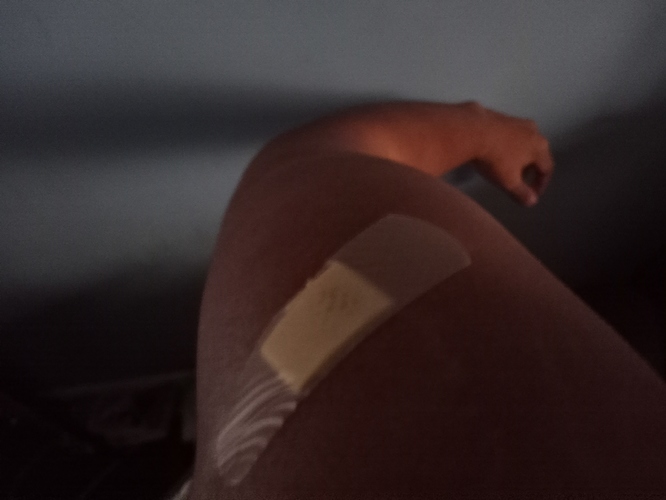 Just got vaccinated and I’m feeling fucking superior to everyone that hasn’t.

Nurse hit us with a choice: Johnson and Johnson shot – you only take it once and it’s around 60% effective, or Moderna shot – after you take it, you come back in 30 days later and take another and it’s around 90% effective. But me and my family were like, fuck that shit, we’re not fucking driving over here again, so we got the Johnson and Johnson shot, and the regret didn’t even set in until, like, an hour later!

What no one told us until AFTER the shot was that the Johnson and Johnson one was more painful. And I’d have to say that it IS, indeed, strangely painful.

As I sit here, reflecting on the fact that I’ll most likely have to take that shot again, annually, for the rest of my stupid life, I’m gripped by the futility and ultimate meaninglessness of our collective existence. These shots are going to keep us alive for only so long, and poking at the spot on my arm where they gave me the shot stopped being fun, like, 3 hours ago.

FUCK YOU JOHNSON AND JOHNSON YOU REDUNDANT-NAME-HAVING BULLSHIT COMPANY I CURSE YOUR NAME!!! May the greatest misfortune greet you in the form of a giant vaccination shot piercing through your organs and impaling you high over the horizon for all to see. fnord.

lol thanks I own JNJ stock it’s one of my biggest positions.

My pharmacy had two extra doses of vaccine yesterday, I guess they opened a bottle for people who had appointments and then some people didn’t show up. Their loss is my gain, my dad and I got the first dose of Moderna. Still a bit sore but I’m fine. My dad had an allergic reaction to medicine once back in his 20s and he’s been afraid to take so much as a tylenol since, so he was freaking the hell out and I had to calm him down. Apparently he still wasn’t feeling good at bedtime last night. Have yet to check on him today.

Had my AstraZeneca jab last Sunday as the news was breaking about blood clots. Bad timing.

Anyway, the next day I spent in bed. I had no headache or shivers or anything. I was just so tired. Happy to report that this only lasted a day and I was 100% the next morning.

lol, if you needed a plaster after your C19 jab, you had a shit nurse

My life continues to be fun and busy as hell. Got a very rare three days off in a row starting tomorrow, and I’m not gonna waste it. Gotta do a car swap at some point in the afternoon to get my car back after some insurance shit (fourth time my shitty car has been smashed into…)

Tonight I’m gonna work more on rescuing my old music after the HD crash. It is but a demo thang, but I’ll be happy to have it finished. Can’t seem to convert an old audio file into a wav, but it’s all good. One less song to fuck with!!

I’m also vaxxed the fuck up and am planning to brave the local bar to see my friend play on Sat. It never really closed, so we’ll see how that goes. Haven’t been there in a very long time, sooooo we shall see.

I just got my second dose 2 days ago.Thought I was going to get away without side effects. No issue Wednesday night. No issue Thursday morning. So for the first time in a month I head to the office to do some filing and handle the mail. Soon as my but hits my chair there, felt like someone hit me in the head with a baseball bat. Got through it and got home. By lunch things were sore that I didn’t know could be. Took a nap in the afternoon. Felt better for 15 minutes. Went to bed early last night. So sore I couldn’t sleep. Start sweating. 2:30 AM, I suddenly feel fine, fall asleep, feel fine so far today. I hope it’s over.

Hello friends and loved ones! I called in sick today at my full time job because I have a migraine, but I’ll be going to my side hustle job later tonight. This marks the first time in what I believe is over a year for calling in, so that’s pretty cool.

I figure I shall take this small window of opportunity to give a diary update, aaaaaand nothing much has changed in my life. I’ve tried going to the local shitty “popular” bar twice the last two weekends now that I’m vaxxed up, but holy crap, I hated that place even before pandemic times.

I’ve mentioned that there’s a lady I’ve been hanging out with a hell of a lot. We ended up getting a bit drunk a few weekends ago and I confessed that I had the hots for her. Her response was, “Yeah, no shit.” I was surrogate brother-zoned yesterday when we did our Wednesday hangout, which is even worse than friend-zoned, but I’m happy for our strong camaraderie. She doesn’t have plans to stick around here much longer, which brings me to…

I’m hoping to move somewhere West Coast before the end of the year, but who knows. I extended my lease until August, and by then I should have even more mad cash in my bank account. Working two jobs sucks, but the money is alright. I moved to Japan with a thousand bucks back in the day, and I certainly have a real nice safety net at the moment. I’ll be getting a newer car before then.

We’ll see. Anyway, here is a picture of me with my friend’s cat: 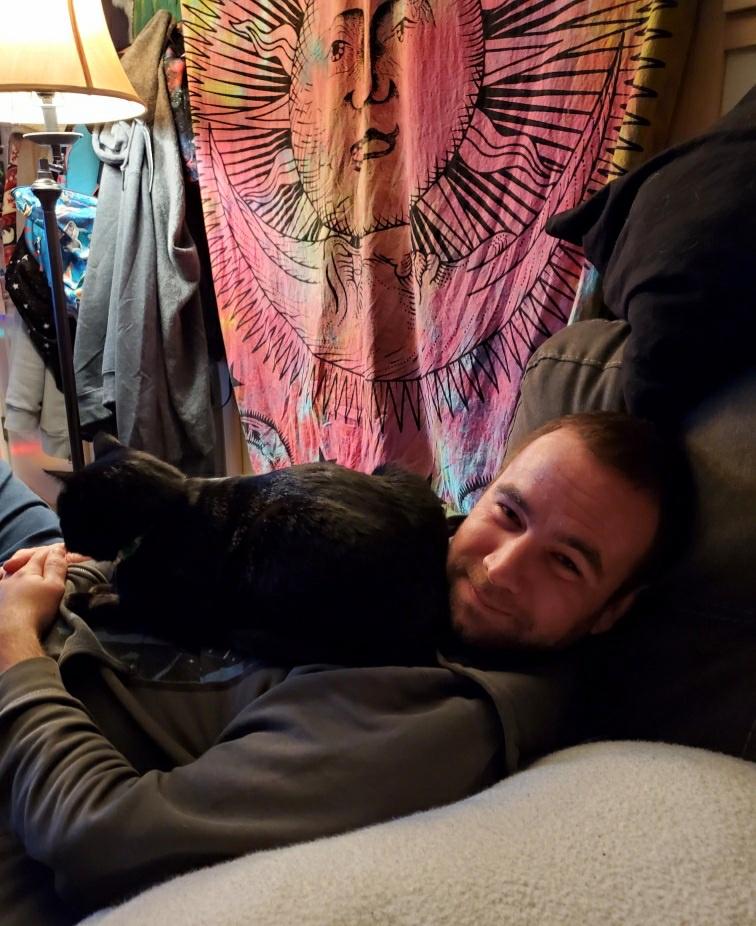 I’m not dead! Are you dead? If you’re reading this, I assume you’re not.

Soooooo, this person I’ve talked about a lot is finally moving. It happened REALLY fast. Faster than anyone expected, I think. I was hoping she’d stick around a while longer, but that’s how it goes. We basically became the inseparable/joined-at-the-hip type. Last weekend was the heavy emotional one. Now we’re just trying to do what we can together with both our busy schedules.

But on the other hand, it’s the kick in the pants I needed to start planning my move. I’m gonna hopefully be talking to somebody this weekend (the owner of my house who lives on the West Coast). Gonna shoot him a text tomorrow about talking (I want to extend my lease one more month so I can end my second job in August so I have time to do some crap (I’ve been hoarding vacation time for this very purpose)).

So yeah, I am certainly bummed, and will be for a bit, but she’s not moving too far (three hours) and will be down to grab more of her shit on occasion, and we’ve got a karaoke party planned in two months when my sister is visiting. I haven’t gotten along this well with somebody in a long time, and I’m gonna be bored as crap.

Anyway, I made and gave her this collage, which is 5 x 7 The name is personal to us.

“Graduation Photo (AKA: Collage for Sticks)” 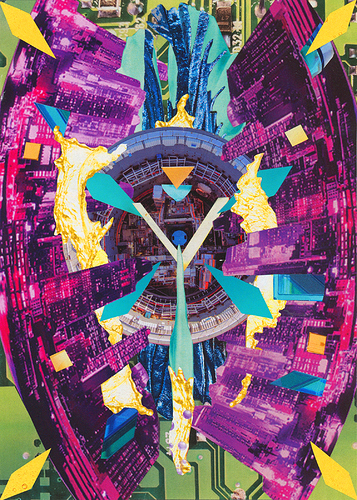 sick borghole duder, glad you’re hangin’ in there alright. friendships/relationships are like rubber bands, tense when stretched out but don’t always break.

I miss my friend. Went out Friday night and met some old friends and tried to get a karaoke party going, but it’s the same old crap, so I had my normal Lesbian Movie Night. Waited on landlord to come by at some point today to give me the check for my AC unit, but no show.

I’m currently working on a collage that’s NSFW, but it’s shaping up to be pretty good. Haven’t made something for myself in a while. I’m calling it “Prom Date.”

I don’t think I’ve actually hung out with any of my friends (save for one) since Halloween of 2018. They’re all pretty much boring old sods anyway. None of them pursued music beyond our last band together back in 2008, I’m the only idiot that has anything musical going at any given point…they watch tv, keep up with 20 shows and drink the last I checked. I couldn’t live without hobbies of some kind, even gaming.

Yep, I can relate. Haven’t hung out with anyone (except for family) for probably over a year. That’s pretty much normal for me, so the only time I remember that there’s a pandemic is when I have to put on my face mask to go out.

Soooooo, this person I’ve talked about a lot is finally moving. It happened REALLY fast. Faster than anyone expected, I think. I was hoping she’d stick around a while longer, but that’s how it goes. We basically became the inseparable/joined-at-the-hip type. Last weekend was the heavy emotional one. Now we’re just trying to do what we can together with both our busy schedules.

My friend has been consistently coming down every other weekend to hang with me since she moved, and we’ve been living it up and having a blast. I’m extremely grateful that we managed to first run into each other almost a year ago, which seems crazy. We are besties through and through.

Her sister puts it best: “When I told you I had a sister who studied Japanese you said 'I don’t have the time to be some girl’s Japanese tutor,” and she said ‘Oh, introduce me to this dork so I can school him and make him my bitch,’ and now you guys hug, kiss each other on the cheek, and say I love you."

Made friends with a Japanese dude I ran into on a river trip, and will find out how his date weekend went tomorrow (“If she turns out to be crazy, it’s gonna be a loooong weekend!”).

Got an angry note at my second job tonight from a guy who likes to leave angry notes. I wish some people would just live and let live. I have zero interaction with you at work. Leave me alone, bro!

Been having some bitchin karaoke parties. Been hanging out with an ex again after over a year of awkwardness, and we’re happy about it. She was my friend before she was my ex, so I’m glad that relationship is back.

All is well. I wish you all a fine day.