Help a brudda out AKA how to do "amplitude splitting"

I stumbled upon a Reason Rack Extension recently that’s got this pretty nifty feature of splitting amplitude into bands, rather than frequency, so no crossovers. it’s called Sunder by Unfiltered Audio. 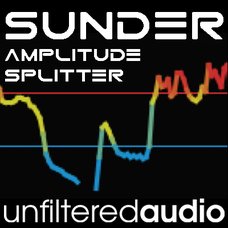 Sunder is the worlds first amplitude splitter available in any format and we’re extremely excited to debut this algorithm as a Rack Extension. Inspired by the

I’ve been wrecking my head trying to recreate it in an FL as a Patcher preset using 3rd party VST’s cause i don’t want to be tied down to Reason as i am not that fond of it after having a demo of the newer version (not used it since about Reason 3 or 4). anyways, i can’t recreate whatever the fuck it does. i thought it was just like some inverse gates, but it doesn’t seem to give the right results.

Does anybody have any ideas of how the "amplitude splitting"in this thing works. i’ve already scoured the internet for a similar plugin, and this seems to be one of a kind. it’s really nice for use with reverbs and a similar “trick” was used by Tony Visconti for a David Bowie record: bit more info about that here

Multi-latch Gating (Or: How to fall in love with noise-gates ;) )

I found a really cool trick a few days ago and thought you might be interested... ...it's nothing really new, but I was surprised how useful it is. I was reading about noise-gates and found this (Wikipedia): Multi-latch gating The invention of a...

I think Meldas level crossover is a similar concept, but i need something with multi-outs, hence why i wanna put it together myself

Sounds interesting, probably not understanding it correctly, but as a quick and dirty start I would try to use 3 channels, putting gates on A (lowest volume) & B with different settings, then using some form of sidechaining on B & C (highest volume) to switch those off when the other ones with lower volume settings are playing (so chaining C to A & B and B to A).

I have no idea what it is but My guess…clone element…use compression/limiter setting the ceiling at certain amplitudes…i.e. one element ceiling is at -6db, the clone is at -2db…
Adjust the gain of the compressor to taste… and route the different amplitudes back to a bus for mixing…

I honestly have no idea just guessing.

That’s about as far as i got yeah. using the difference/reject/delta signal of a bunch of gate functions e.g ducking, upwards expansion and a traditional expander. it messes around with the original dynamics too much, where as Sunder reconstructs it perfectly. i’m at a loss as to how they managed that

Maybe this is an oversimplification, but I’d just take a multiband compressor, group it or run it parallel and solo whatever bands I was using and map them not to crossover with macros or something. Then use those bands for whatever effect chaining I wanted, compression or not

Also, Unfiltered Audio is the shit. I’d love to try this thing out

There’s no splitting of the spectrum going on here mate. That is what i like about it. I think separating stuff with crossovers tends to alter the sound too much if you end up doing a fair bit of processing to each band and as a result of that it can push things back in the mix, this kind of just sounds like you altered the perspective and distance of the audio from within itself. You can make reverbs sound like they are truly far away by just applying it to the very “low”(as in amplitude, not crossover frequency) and doing something to the "high"band to make it shoot forward relative to it. It’s not simply just like turning the send way down on a reverb either because the reverb is only seeing the really low, bottom of the dynamic range bits of the sound

Hmmm, not sure, might be some general problem with delayed signals or something like that. If you don’t want to begin a new life as a code magician, my only ideas are these:

Aah,yeah. I didn’t think to try a lookahead or feeding them sidechains with the trigger pre or post delayed. It does sound like an issue with the triggering too. I’ll try it out tomorrow and let you know how get on

take a look at Boz’s Transgressor 2, by idea it sounds very similar and signal add-up feels flawless. Also this concept reminds me of Unfiltered Audio’s G8.

I dont know if this will help, but I got a good result in ableton using this technique

I created a fx group with 3 channels.
the first one for the loud part with a gate at -13
the 3rd channel for the silent one at -20 inverted or flipped
the 2 one for the mid range I copied the silent one and flipped it to normal again and added a copy of the gate on the loud channel and flipped that one.
works fine without any change in the volume or playback.
if you want I can share the fx group, but if you dont have ableton it will not help you

I’m surprised that Unfiltered Audio didn’t implement this in their later products, like Byome/Triad. Looks like Sunder exists in VCV Rack and you can run it as vst in a DAW. Worth taking a look. UA also has their blocks bundle for Reaktor but I’m not sure if they have Sunder in it. It’s called Euro Reakt. 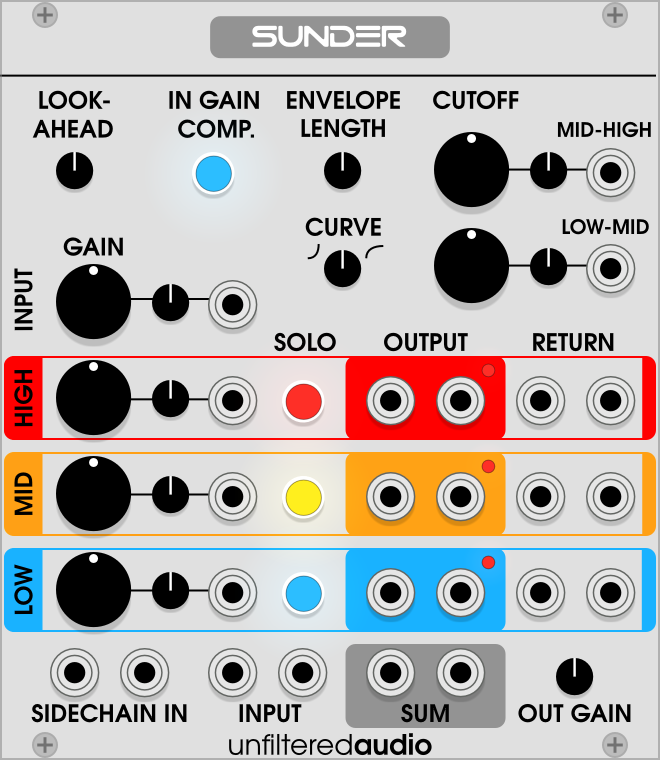 You and me both, or even just release it natively.

Naa, i don’t have access to Ableton Live i am afraid. i think my first attempt was something along those lines, as i just assumed it was likely to involve things that their plugin G8 already had. i think maybe the gate you use matters, because i couldn’t get a clear separation between the dynamics without some overspill and mis-triggering with the ones i tried

If you could take a screenshot of ya settings when ya have the time just to see if i fucked up somewhere on the gate i used, that would be great

if youonly need it for one specific sample, you can send me the sample I can run it true it and send you the different outputs to check if the result is ok

Damn, I forgot that I got this (and yoko) in VCV Rack a few months ago and still haven’t tried Sunder.

I’m thinking that the answer to the riddle might lie in using a series of separate input followers on a signal and modulating whatever FX you have setup via a linear dry / wet threshold. Obviously this isn’t going to work in FL’s patcher or anything super limited (unless they’ve updated since the last time I used it), but recreating this in VCV or Voltage Modular seems like a pretty simple task, and you could even band-split it wherever you want.

With that said, I still bought Yoko for VM because it’s handy as hell and requires zero setup work, so sometimes using the plugin itself (if they ever port it over to anything better than VCV Rack) is the best option.