I just got that 2014 iteration of Thief on steam for a measly 2.99 usd and tried it out, and man its good fun. I love the stealthy side of games and this one gives you a ton of options and styles to infiltrate shit. The game play is only slightly clunky by today’s standards since we have parkour mechanics in every game now.

Humankind out later today. Preloading it as I type this

Finally got a few hours of Fireteam in last night. Fun with friends, but I agree nothing groundbreaking. I like the soldier perk grid and the card modifiers though, can make for more tense matches on higher difficulties.

The game sold wildly outside of the Dev’s expectations though so hopefully we can see a bunch of tasty additions down the road.

I started it as a Druid and loving it, but my current gaming ergonomics are shit, I need a better solution

Have you tried the controller support yet? It’s pretty brilliant once you dial it in. Lots of QoL additions the keyboard/mouse didn’t get it.

I’m playing on console and the controller is pretty tight.
On the other hand, in Pure Activision-Blizzard style, the Amazon and the Sorceress find less gold…

I’ve been having a blast Retroarching Dreamcast over the past few weeks since recovering from an operation. Dave Mirra, Sega Rally Championship and even THPS 2 play incredibly well, it’s like a whole new world of old ports I didn’t even know made it across systems, mostly coming with graphics upgrades along the way.

If anyone has some DC recommendations, I still have a whole fucking month of recovering to do and I will definitely play them!

I still have my Dreamcast setup, had it gone through and tuned up recently.

IMO, Daytona USA on Dreamcast is one of the best racing games ever.
I also played a lot of 4x4 Evolution back in the day.
Sonic Adventure 2 is pretty good, go ahead and get sucked into the Chao garden. That got me through two weeks of quarantine for the flu once.
It has really good versions of Star Wars Episode I Racer and ReVolt.
I don’t know if there’s a first one, but I have Frogger 2: Swampy’s Revenge and it’s a fun game. Really fun expansion of the classic Frogger gameplay.

That’s what I still enjoy in my physical collection, I just had my DC modded to play ROMs too, so I’m exploring some of the other stuff I’ve heard about - ChuChu Rocket, Space Station Channel 5, Seaman (which I actually had when I was younger but I could never figure it out so I traded it in after like a week), IDK what else, but all that ought to keep you busy for at least a few days.

IMO, Daytona USA on Dreamcast is one of the best racing games ever.

I had this on Saturn as a kid, but since booting up the DC version I’m noticing this feels way more like the arcade did back in the day, which is awesome. Everything that got ported over from other consoles feels more authentic, and sometimes I even forget that this was technically the generation of PS2, even though my terrible little laptop can somehow emulate everything.

I watched AVGN play Seaman on Youtube (best episode ever, IMO) and that game looks so ridiculous, but in a good way!

Dreamcast is a super interesting console to me. A lot of good games, just with a really short US lifespan (though I hear they actually made games for it in Japan until like 05 or 06 because it went on sale a year sooner and actually had a really big install base by the time the PS2 came out). I know a good number of games that were originally on Dreamcast and got ported to other consoles were inferior on other consoles because Sega’s dev teams had to learn new hardware for all the other ones. I think the biggest technical limitation that DC had versus PS2 and Xbox was it used a souped up CD drive for games so they could make the console smaller, where PS2 and Xbox used DVD so they had way more storage space for games. Easier for devs, bigger and better assets all around. If you wanted to run a one-disc PS2 game on DC it would have been I think 3 or 4 discs, and that’s really expensive. But computer power wise, I think they were all reasonably close.

Oh and as far as arcade stuff goes, people have started porting ROMS from Sega’s NAOMI arcade hardware of the time and it’s pretty much 1-1 a Dreamcast. The arcades just used giant cartridges instead of CDs. So I guess that’s why all the arcade games play so well on it.

I’m actually starting to get interested in the Saturn library, any good recommendations for emulators for that? Bonus points if I can run it on retro-pie, but I’m happy to run it on a PC if need be. I just did a new gaming rig, so my old one is going to go into my TV room and I can run stuff on that as well, it’ll just be a few months until I have all the parts for that.

Retroarch / retropie definitely has the cores for it, but from what I’ve read and experienced Saturn is very hit-or-miss (also, Mednafen has some cool workarounds IIRC but that’s probably PC-only). I booted up Clockwork Knight on it once and didn’t have any problems, but it seems like everything else I’ve tried (aside from arcade ports) seems to glitch up or just never even boot. It still seems notoriously difficult to emulate and I’m hoping more development changes that in the future because that’s a huge block of untouched nostalgia for me as well.

Also, I still want to find out if Bug was as playable as it seemed at the time or if it just sucks.

Gauntlet on sale on Steam this weekend. Picked up a 4-pack for me and my friends. A complete mindless riot just like you’d expect. Not exactly great longevity but a hoot for what it is. I’d put both thumbs up if the endless hordes of undead hadn’t eaten them.

I played through it with the wife on Sofa co-op a while ago, quite fun.

I used to have a Dreamcast and back in 2000, I used it to go online at the time, dial-up style. My two favorite games were Quake III and Resident Evil Code Veronica

Oh man, I didn’t get internet until 2009 (true story) and the modem for DC with an Ethernet socket instead of phone port is more than 300 USD these days. Never got to do any net play on it, but it’s one of those things that makes DC feel ahead of it’s time for me. Had cross-platform play too in select games, it’s a selling point on the back of 4x4 Evo.

Finished Starfinder Skittercrash this evening, with me GM’ing. Very amusing and sufficiently different from the first one-shot, Skittershot. It stars 6-armed little furry aliens that are just here to help. What could possibly go wrong?

The adventure comes with 4 pre-generated characters though people are welcome to make their own. I don’t really recommend that as the adventure is definitely based around the skillsets of the pre-gens and some creative GM’ing is needed to work around skills that might not appear in the party if you make your own toons. Found that out the hard way in the first adventure.

Its a pre-made adventure intended for 3-4 hours of play at a games day conference type thing. We completed it in just under 2 months

Much silly fun. Its a free download from Paizo but obviously you need Starfinder to be able to play it. 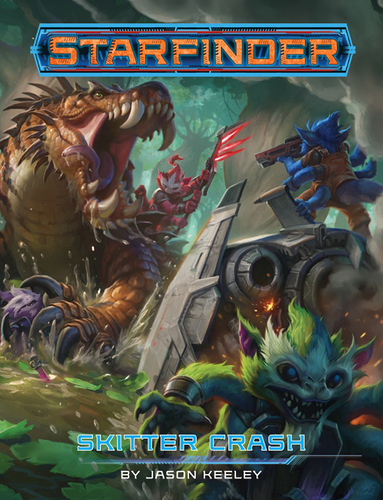 My friend was telling me there’s a puzzle game about synthesizers, but it was hard for him. I wonder what we’ll make of this.

looks way curious, reminds me of some of the Zachtronics puzzle games (spacechem / Opus Magnum). Report back how you like it!